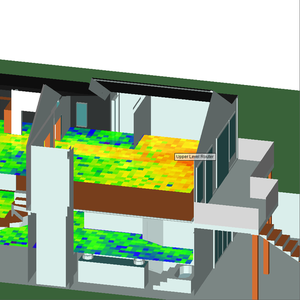 Device design does not end with the device. Determining a good design means knowing that it will work well in all of its intended environments. With indoor WiFi environments, the metrics for a good design include received power, multipath, complex impulse response, throughput, capacity, and more.

XFdtd and Wireless InSite ensure a comprehensive WiFi device design process, from simulating the initial antenna pattern to indoor modeling to determine optimal coverage. Together the products can ensure accurate simulations and a smooth workflow.

WiFi modulation and coding scheme (MCS) and BER are available for WiFi protocol at various SNR levels. For WiFi 802.11n and 802.11ac, each MCS has an associated throughput based on the SNR. The UE receiver threshold is needed as well.

In this example, we have taken an inverted FL antenna and placed it into a laptop. The antenna is simulated in XFdtd to output the far-field gain pattern.

An apartment environment is created using Wireless InSite’s floor plan editor and furniture is placed using imported CAD objects. Two transmitters are placed on the ceiling and the entertainment center as the WiFi access point. The receivers are mounted 1.5m above the floor in several locations, both within line-of-sight, and beyond-line-of-site from the transmitter.

The three-room apartment with door openings and windows contains common household objects like a couch, TV, dining table, etc. This custom scenario built using Wireless InSite allows users to specify their scene as desired. Similar scenes such as a conference room, warehouse, multi-story house or building can also be simulated.

WiFi Performance in a House with Two Routers

This example investigates WiFi throughput coverage in a house provided by 802.11ac routers operating at 5 GHz using an 80 MHz bandwidth. The geometry for the house was imported from a CAD file and a flat terrain was placed underneath the house.