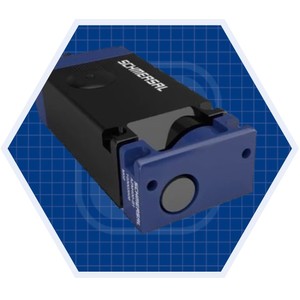 The AZM400 Series is designed for machine/work cells where access to a hazardous work area must be controlled until safe conditions exist. The solenoid lock secures the machine guard until dangerous conditions, which may exist immediately after removal of power, have abated. The solenoid lock may be controlled by a time delay, motion detector, position sensor or other suitable component.

The main switch body contains the RFID sensor and a motor-driven locking bolt, which fits into a hole in the actuator block with the matching RFID target. Once locked into place the solenoid bolt provides a holding force of 10,000 N, making the AZM400 solenoid interlock is particularly well suited for heavy doors.

The actuator is designed for misalignment tolerance. The diameter of the actuator hole is 4 mm wider than the bolt, tolerating up to 2° angle offset. The gap between the switch and actuator block can be up to 7 mm and still detect the RFID target.

In the event of an actuator misalignment at the time the bolt is extended, the switch can detect if the locking bolt does not reach the "locked" status at the first attempt and will make a second, autonomous attempt. Only after the second attempt has failed will the AZM400 report a fault. This reduces the number of error messages and protects the device and the machine against damage.

Since the locking bolt is motorized, the AZM400 is both power-to-lock and power-to-unlock. It is bi-stable in the event of a power failure, which maintains the last locked status of the interlock. It is available with a manual by-pass or an emergency exit knob (T) if the unit is mounted inside the hazardous area, which allows the bolt to be retracted manually. There is a version available with an electric manual release (E), which allows the unit to be hooked up to an auxiliary power supply to allow the motor to retract the bolt.

In addition, the AZM400 uses RFID sensing to detect the actuator and indicate a closed guard. This non-contact operating principle limits wear on components, tolerates misalignment, and offers the option of individual coding: The basic version of the sensor responds to any AZM400-B1 target actuator; The “I1” version only accepts the coded ID number of the specific target actuator which is taught in during the first start-up; The “I2” version allows the teach-in process to be repeated, allowing replacement of a lost or damaged actuator, with a ten minute hold period which prevents a quick change of the actuators.

The AZM400 series is cULus and CE approved to meet stringent North American and European Standards, and can be used in the highest level of machine safety circuits, PLe to ISO13849-1 and SIL 3 to IEC61508. They are Type 4 interlocks per ISO 14119, with a high coding level with the individual coding option (I1 or I2).