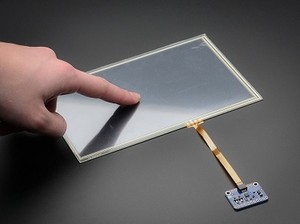 Resistive touch screen was first invented by Dr. Samuel G. Hurst in 1971. He called the sensor Elograph, after his company Elographics.

What is resistive touch?

As the name suggests, resistive touch LCD screen works on the basis of a pressure applied to LCD screen. A resistive touchscreen consists of several thin layers. The layers comprise of a bottom glass panel that is followed by two resistive circuit layers which are coated with electrically conductive thin metallic layers (e.g. ITO) separated by a slim gap consisting of spacer dots.

When pressure is applied on the screen with a finger or stylus, the outer resistive layer is pushed onto the inner layer. The two metallic conductive layers come into contact, causing a current loop and generating a change in resistance on both vertical and horizontal axis. The change is detected by the sensors located on the screen's edges which in turn find out the exact location by using the horizontal-vertical coordinates to indicate the touch point.

Resistive touch LCD screens have been used widely for many years. It is a well-proven and trusted solution for building human-machine interface. Here is an example of "How to implement LCD display resistive touch".