Bulk Bag Filler ROI Pays For Itself In Just Weeks 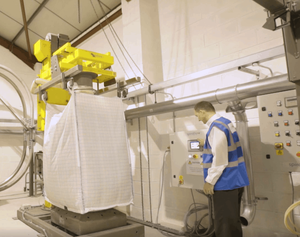 Given its superior capabilities, Spiroflow’s CTE densifying bulk bag filler is able to provide a fast ROI.  As bag densification results in more product per bag, production environments will be able to accrue some valuable cost benefits, including: the ability to use shorter bags, resulting in a 5% reduction in bag cost for every 10% reduction in side seam height; a saving in packaging costs and floor space as less bags are required; reduced shipping costs – given that a standard shipping container normally holds 20 bulk bags, by using a CTE bulk bag filler, the equivalent of 4 extra bags can be accommodated in a container (based on a 20% increase of product in a bag due to densification) – that’s 1 in 5 containers paid for by the CTE.

The CTE’s hang weighing system, which delivers a weighing accuracy as tight as +/- 907g, features a weigh frame that floats on a three point load cell system. Only the weigh frame, fill head, hanger arms and the bulk bag are weighed, which significantly reduces the dead load seen by the weighing system resulting in more accurate and consistent weighing performance. The moveable carriage assembly raises and lowers, placing the bottom of the bulk bag into contact with the cone table, which forces ingredients into the bottom corners of the bulk bag during filling, densifying the product and allowing the bag to accommodate more product. The CTE bulk bag filler can fill lined or unlined bags, with or without an outlet spout, and can be filled with or without pallets.