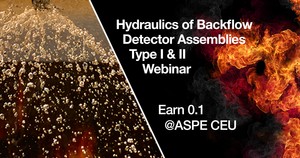 Whether you’re an expert or new to the backflow game, watch the webinar recording to hear more about:

Are You A Backflow Detector Assembly Expert?