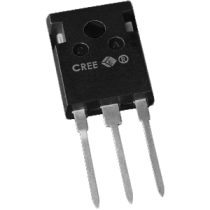 New Wolfspeed Silicon Carbide Semiconductors First to Meet Automotive AEC-Q101 Standards Wolfspeed, A Cree Company and leader in silicon carbide (SiC) power products, announces E-Series™, a new family of robust SiC semiconductor devices for the Electric Vehicle (EV) and renewable energy markets that delivers the highest available power density and durability for on-board automotive power conversion systems, off-board charging, solar inverters and other outdoor applications.  Wolfspeed’s E-Series family is the first commercial family of SiC MOSFETs and diodes to be automotive AEC-Q101 qualified and PPAP capable.  The designation makes it the only commercially available family of SiC MOSFETs and diodes that meet high-humidity and automotive qualifications to deliver some of the most reliable and corrosion-resistant components in the power market today.

“The new E-Series™ family provides automotive manufacturers with robust, automotive-qualified MOSFETs and diodes for on-board and off-board charging circuits, which are crucial to the evolution of EV technology,” said Cengiz Balkas, senior vice president and general manager of Wolfspeed.  “The commercial rollout of the E-Series family establishes Wolfspeed as the first in the industry to launch a full suite of MOSFETs and diodes that are capable of withstanding high-humidity environments while offering the reliability and system-level value needed to drive widespread adoption of silicon carbide among automakers for their next generation of EVs.”

With the new automotive-qualified SiC MOSFET, Wolfspeed becomes the first and only silicon carbide semiconductor manufacturer to offer a complete family of qualified parts to the EV market.  The portfolio expansion also enables Wolfspeed to supply power conversion components within an EV for an end-to-end solution.

The E-Series family also addresses the key challenge in designing and maintaining solar power systems: finding products that can withstand extremely harsh environmental conditions while maintaining peak performance.  Since corrosion caused by humidity is a major consideration when designing outdoor power systems, the key qualification for harsh environments is the HV-H3TRB rating (also known as HVDC THB or THB80).  The HV-H3TRB qualification testing was performed at 80 percent of the rated blocking voltage in an environmental chamber at a constant 85?C ambient with 85 percent relative humidity. Both the E-Series MOSFETs and diodes are HV-H3TRB rated, which means they are optimized for use in solar inverters and other outdoor systems as well as EVs.

State of the art GaN on SiC and LDMOS solutions