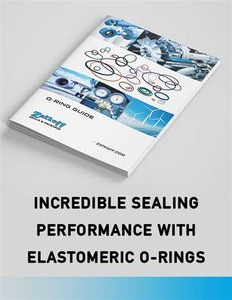 Traditional O-ring seals were made of natural rubber, which limited usage to water and other fluids that do not deteriorate rubber. DuPont's “Neoprene” of the 1930s and Standard Oil Co. of New Jersey’s buna process of the 1940s advanced the sealing capacity of O-rings when they introduced oil-resistant elastomers that could be made into viable compounds for a wide range of uses.

Given the technological advancements in recent years, many useful elastomers, or polymers, have since been developed that satisfy even higher operating conditions. Today’s O-ring compounds offer better chemical and physical properties, allowing them to withstand higher pressures and higher temperatures, with incredible resistance to numerous fluids.

Due to its affordability, ease of installation, and small space requirements, the O-ring is historically known as the most widely adapted sealing solution. Known for their durability and versatility, O-rings are suitable for dynamic or static applications with a wide range of temperature requirements.

Elastomeric rubbers, both natural and synthetic, are engineered materials that share common characteristics, such as elastic recovery after the application of stress (either compression or elongation), flexibility, extrusion resistance, and relative impermeability to liquids and gases. There are currently more than 20 “classes” of elastomers, each of which is characterized by its own unique properties and performance characteristics. Vulcanization chemistry and the inclusion of other ingredients can modify both.

Elastomer products are formulated to afford specific engineering properties for well-defined end-use applications, which is achieved by blending additives mechanically with the base elastomer. A typical elastomer compound may contain the following:

Elastomer products are manufactured by curing, known as vulcanization, which is the process that converts the elastomer from a thermoplastic mass into a thermoset shape. Reactions occur whereby cross-links, or chemical bonds, are formed among the polymer chains that comprise the base elastomer(s). These cross-links impact the “elastic” characteristics of the elastomer product.