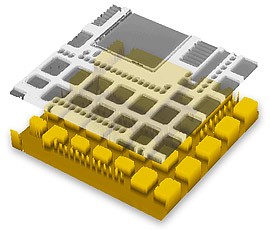 Thin transparent thin films are critical across a variety of markets and applications, including consumer electronics, semiconductors and optics. Precise monitoring and control of thin film processes is achieved by measuring top surface, thickness, and substrate surface characteristics - all of which are enabled by multiple thin film measurement and analysis technologies available on ZYGO's 3D optical profilers.

Advanced Model Based Analysis (MBA) is the most advanced CSI-based thin film measurement technique available from ZYGO, and works by comparing a theoretical model of the sample film stack to an actual measurement signal as seen by the profiler. This patented technology simultaneously measures topography, thickness, and substrate topography for single layer films from 50 - 2000 nm in seconds. In addition to thin film characterization, MBA technology can be used to perform true topography measurements of dissimilar materials by adjusting for the phase change on reflection (PCOR) that occurs in these situations.

Standard Film Analysis (LSQ) is used to measure film thickness and substrates of films from 1 - 150 µm optical thickness, as well as the top surface of films from 0.4 - 150 µm. Thick film metrologyworks by isolating the interference signals that are created by the multiple material interfaces and require only basic knowledge of the film's index of refraction.

Because they are based on CSI technology, there are several advantages that MBA and LSQ thin film measurement technologies provide compared to other techniques:

• 3D areal surface maps provide context for understanding a process that cannot be observed when film metrology is reduced to a single thickness number.

• Film measurement is performed through-the-lens, which helps to ensure that the region of interest is exactly the region profiled.

• No additional hardware is required for most applications of MBA or LSQ thin film measurement.