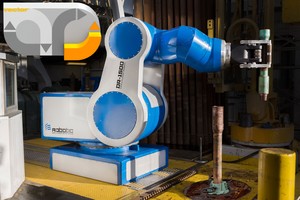 The project from Norwegian company Robotic Drilling Systems has been awarded the most creative Energy Chain application system in biennial awards.

Every two years, igus presents its "vector awards," celebrating unique and creative uses of Energy Chain cable carrier systems. This year, the gold vector was awarded to Norwegian company Robotic Drilling Systems, for their "Drill-floor Robot DFR1500," a central robot for a fully automated oil drilling system. While in typical oil drilling operations work requires the carrying of individual drilling elements and the manual fixing of bolts, the company is working to develop the oil platform of the future, where drilling and preparation are carried out entirely by robots.

The DFR-1500 uses individual drilling elements, moving them into the correct position for drilling operation using a reverse-bend-radius (RBR) Energy Chain cable carrier in the articulated joints of the system. This sophisticated and unique design won over the vector jury, consisting of representatives of business, research, and specialized media platforms. The award, including a €5,000 prize, was accepted by Robotic Drilling Systems' CEO, Jimmy Bostrøm at Hannover Messe 2016.

The silver vector was awarded to Italian company Fidia, which utilized a pre-harnessed multi-rotational module (MRM), which allows for rotational movements up to 720º atop one of the company's machine tools. The MRM Energy Chain offers high speeds and accelerations (up to 180º/s and 30º/s2 respectively) for extremely fast changes in direction and rotation in the machine tool's Z-axis.

German company Ebawe Anlagentechnik GmbH's project took home third prize in the 2016 awards. A concrete distributor, which is used for the industrial production of a large variety of concrete elements, must be moved to a cleaning area multiple times each day to maintain smooth production - approximately 164 feet from the production area, as well as a travel of ~45 feet during production processes. To compensate, two Energy Chains in a trough are used, one longer, and one shorter. In regular production travels, the chain is locked, and moves together with the trough on wheels until fully extended. When moving to the cleaning area, the remaining distance is covered by the longer chain in a fully automated process.

The large width of catamaran boats typically required two berths in port to handle their large width, which is expensive and often not available in busy harbors. Craning of these boats can also be problematic, as few facilities offer the width required. To resolve these problems, Futura Yachtsystems Entwicklungs GmbH developed the first width variable catamaran, which took home a special vector award. The variable width application enables the hulls to extend and retract, reducing the width from 26 to 16 feet using seawater resistant Energy Chains, along with DryLin self-lubricating linear sliders, both from igus.

To see photos of all winning applications, as well as an overview of all vector award submissions, please visit www.vector-award.com.

igus GmbH is a globally leading manufacturer of energy chain systems and polymer plain bearings. The Cologne-based family business has offices in 35 countries and employs around 2,980 people around the world. In 2015, igus generated a turnover of 552 million euros with motion plastics, plastic components for moving applications. igus operates the largest test laboratories and factories in its sector to offer customers quick turnaround times on innovative products and solutions tailored to their needs.

Guide cables from start to end without slip ring