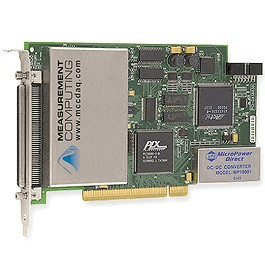 Data acquisition computer boards, also known as DAQ cards, are self-contained printed circuit boards (PCBs) that plug into backplanes, motherboards, or interface directly with a computer. They either have direct inputs or receive analog and digital inputs from signal conditioners, modules, relays or sensors. They are capable of supplying outputs in the form of an analog voltage, current, frequency, or switched output. They are used to translate signal and sensor data into a digital format that computers can process. Data acquisition computer boards are an integral part of data acquisition systems for monitoring, analyzing, and/or controlling systems and processes.

DAQ cards interface with computers, motherboards or backplanes by the use of a computer bus. The computer bus is often used to describe data acquisition computer boards as it defines interface requirements and the bandwidth of the device. The bandwidth is controlled by the digital resolution and transfer speed which are characteristics of the computer bus. There are many different types of buses and each bus has a unique foot print that will mate with a socket creating a board-to-board connection. When selecting a DAQ card it is important to evaluate the available options so that the DAQ card meets the required performance and interface needs. Common computer bus types include CompactPCI, IEEE 1394 (FireWire®), IndustryPack® (IP), ISA/EISA, MIX, Multibus (I & II), PC-104, PCI, PCIe, PCMCIA, PXI, PMC, STD, USB, VME and VXI/MXI.

DAQ boards translate sensor and signal data into a digital format that computers can process. Data acquisition software allows access to the data in order to monitor, analyze, and/or control systems and processes. There are many popular software packages used for data acquisition. Boards may include software, either a version of commercial software, a lite version, or a proprietary software package made for that card. 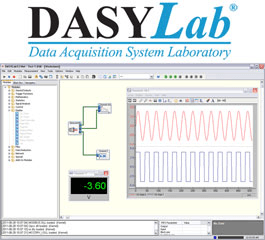 Data acquisition computer boards are offered in many different configurations. They receive a set number and type of inputs and may supply outputs as well.

Signal inputs can be either digital or analog. Digital inputs are an on or off signal producing a square wave. Digital inputs break down the information into binary code, which is a series of 1's and 0's. Analog inputs are a wave signal which means that the value changes steadily over time and can have any value in a range. Common analog inputs include voltage, current, frequency or a charge inputs.

Sensor inputs are gaged inputs that require signal conditioning. Common sensor inputs include accelerometer, thermocouple, thermistor, RTD, strain gauge or bridge, and LVDT or RVDT. While many of these inputs actually use a voltage, resistance or current carrier signal they differ from analog signal inputs as they are in reference to an applied value.

Data acquisition computer boards may also have signal outputs. Signal outputs are similar to the inputs. They can output an analog voltage, current, frequency or switched output.

The function of the filter is described by the transmitted frequency. Low pass, high pass, band pass, band stop, and all pass filters are available. In addition, some data acquisition computer boards include an integral amplifier with programmable gain and a variable bandwidth.

Bandpass filters allow a section in the middle of the spectrum to remain.

There are several types of analog-to-digital converters (ADC) for data acquisition computer boards. Flash ADCs apply the input in parallel to many fast comparators whose thresholds are spaced equally throughout a range of input voltages. Half-flash ADCs combine the results of two sequentially performed, lower-resolution flash conversions to determine the output code. Integrator ADCs provide an output code that represents the average value of the input voltage over a time interval. Successive approximation ADCs sequentially compare a series of binary-weighted values with an analog input to produce a digital output in a series of steps. Voltage-to-frequency ADCs convert an input voltage to an output pulse train with a frequency proportional to the input voltage. Delta sigma circuits sample at a rate and frequency that pushes the quantization noise out of range.

National Instruments - What is Data Acquisition?