Data loggers and data recorders acquire digital data from sensors and other signals. Typically the device is used in situ or in the field, and stores data over a period of time. The data is then usually downloaded and stored to a computer system for historical recordkeeping and analysis.

The term data logger is primarily used to describe a device that stores data for subsequent download to a host PC. Data recorder is a broader term used to describe any device that records sensor or signal inputs. Either device may also include real-time features such as monitors and alarms. They can be hand-held, modular, stand alone, rack mounted, DIN rail mounted, or printed circuit board devices. The following chart describes how each form factor has unique capabilities and functionality.

The functionality of a data logger or data recorder crosses the functionality of a chart recorder. Both devices are used to acquire data while the latter implies that data is represented in a plot, graph, or other visualization of data versus time. With the use of a host computer, the same functionality can be achieved by almost all data loggers and data recorders. They may even interface with a printer when a hardcopy is desired. More detailed information specific to chart recorders is available in GlobalSpec's Chart Recorders Selection Guide. 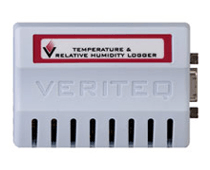 The user interface (UI) is the front end of the device that allows users to program, configure, or conduct other human-machine interactions. The interface can be simple or even nonexistent such that you plug in a sensor and turn it on. It may also be an advanced UI, such as a touch screen interface or graphical display and keyboard, which allows users to define complex actions, such as time-delayed data capture, mathematical computations, or alarm and control functions.

The computer interface is used for downloading, transferring, or acquiring data. It is important to select a device that is capable of interfacing or transferring data to a compatible host. Host connection choices include direct backplane interface, RS232, RS422, RS485, USB, IEEE 1394, GPIB, SCSI, TTL, parallel, Ethernet, modem, and radio, telemetry, or other wireless interfaces.

Memory is an important specification as it determines the amount of data that can be stored. Most devices are characterized by bytes, a unit of digital information typically representing 8 bits, and available memory may range from several kilobytes (kB) to several gigabytes (GB). Devices may also specify memory by number of data points. Data points cannot be converted to bytes as it is not a standard value and depends on the resolution and the type of data being captured.

Resolution refers to the degree of fineness of the digital word representing the analog value. A ten-bit number contains 210, or 1024, increments. A 0-10V signal could therefore be resolved into approximately 0.01V increments. A 12-bit representation would be in 212 (4096) increments, or divisions of 0.0024V for the same signal. Each additional bit doubles the resolution, and one bit is required for the polarity (sign) of a number.

Data Loggers and data recorders are data acquisition instruments and share many of the same performance characteristics as other types of data acquisition instruments. Physical parameters are captured, converted to a digital format and stored or transmitted to a host. Temperature, vibration, shock, and other environmental parameters are some of the most common measurements acquired by loggers and recorders. These devices can also accept a wide variety of other types of signal and sensor inputs. They may even supply excitation to an active sensor or device. More information about performance specifications relative to all data acquisition devices is available in Engineering360's Data Acquisition Specification Guide.