electromagnetic induction.A basic transformer consists of two coils of wire wrapped around a core, known as the primary coil and secondary coil; the coils are separated by a medium such as air, water, or metal. The primary coil is typically connected to an alternating current (AC) power supply. When voltage is applied to the primary coil, it creates an electromagnetic field and induces a voltage in the second coil.

If both coils contain the same amount of wound wire, the induced voltage will be equal. Frequently, the secondary coil has fewer windings than the primary coil, and therefore the induced voltage will be reduced. For this reason, transformers are often used to channel high voltages into a lower-voltage circuit. Conversely, if voltage is applied to the secondary coil, it will be increased to the voltage of the primary coil by induction. 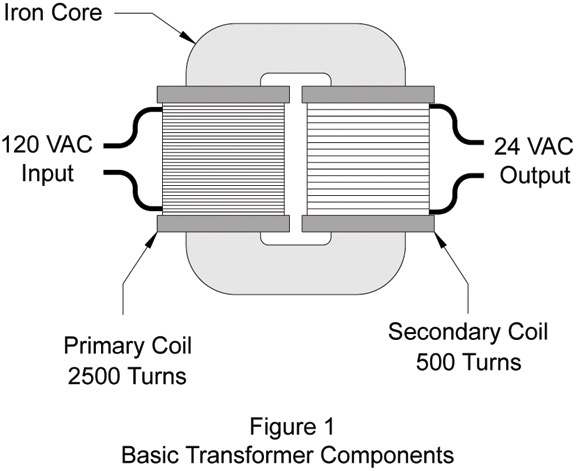 Transformers are extremely common devices used in many applications, primarily the following:

While transformers are frequently used for power distribution, they can also be used in audio and radio frequency (RF) applications for impedance matching.

The video below provides an excellent visual overview of transformer basics and wiring.

Power transformers typically use relatively high voltages and may be as large as a substation transformer or as small as an electronic component. For information about specific types of power transformers, please read the Power Transformer Selection Guide.

RF and signal transformers transfer information from one circuit to another. These devices generally use low voltages. Specific types include:

Power rating is an important specification when selecting a transformer, and is measured in volt-amps (VA). Power rating is calculated by multiplying the total current load of a circuit by the circuit's secondary voltage, such that:

For example, a particular 24 V circuit may have the following components and current load:

This circuit's power rating is calculated as:

When precisely calculated, power rating represents an appropriate threshold when dealing with resistive loads. However, when selecting a transformer for use with a solenoid or large motor, inrush loads, or high momentary loads generated upon startup, must be considered. For solenoid valves, the calculated power rating may be 16 VA, while the inrush current may boost that level to 27 VA. A typical control transformer is designed to effectively handle these high currents, either by modifying the duty cycle or by using "slow-blow" fuses.

Because transformers naturally generate heat, they must be cooled by either air or a kind of fluid.

Dry transformers feature the two coils facing each other and separated by air; this type does not have a core. The transformer's case or enclosure is ventilated to allow airflow, which cools the windings. Encapsulated transformers are special types of dry transformers that utilize a solid resin to encase and seal the core and coils.

Fluid-filled transformers immerse the coils and core in oil or water to keep the transformer cool.

Transformers may be constructed using a variety of core materials.

Split core transformers use a hinge and locking snap to allow attachment without interrupting a current-carrying wire. They are typically low-cost devices.

Toroidal transformers consist of copper wire wrapped around a cylindrical core, preventing magnetic flux that occurs within the coil from leaking.

The Restriction on Hazardous Substances directive, also known as RoHS, and the Waste Electrical and Electronic Equipment (WEEE) directive are two closely linked pieces of legislation adopted by the European Union in 2003. RoHS and WEEE were both passed to limit high-tech waste and to improve the safety of existing waste.

Although RoHS is often referred to as a "lead-free" directive, it actually restricts the use of lead and five other hazardous chemicals: mercury, cadmium, hexavalent chromium, polybrominated biphenyls, and polybrominated diphenyl ether. While there is no standard RoHS logo or mark, a typical imprint is shown below.

The WEEE directive sets targets for the recycling and recovery of all electrical and electronic goods in order to reduce waste. The directive relies on equipment manufacturers to provide reasonable opportunities for recycling of their goods. The standard WEEE mark is a trash receptacle crossed with an "X" above a thick black line, as shown below. 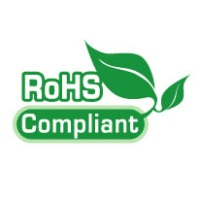 Transformers may be designed and manufactured according to standards published by various agencies and standards bodies. Common transformer standards include: