Electric valve actuators mount on valves which, in response to a signal, automatically move to a desired position using an outside power source. Single-phase or three-phase AC or DC motors drive a combination of gears to generate the desired torque level. Electric valve actuators are the most popular actuator used due to their high level of precision and their fast response time.

There are two basic types of electric valve actuators: rotary and linear. Each type of actuator uses special valves.

More information on rotary and linear motion valves can be found on Engineering360's Valve Types page. 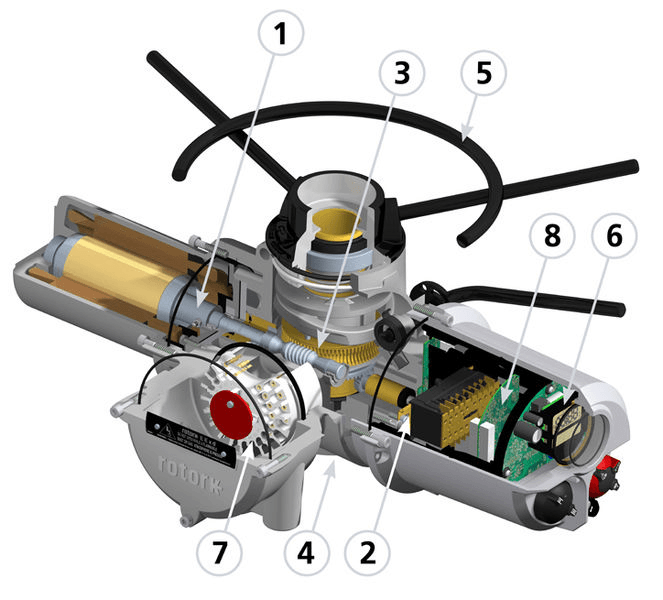 Electric rotary valve actuators drive components rotationally via electromagnetic power from a motor. They often provide control and indexing capabilities to allow multiple position stops along strokes. Rotary electric valve actuators include an electrical enclosure, electric motor, reduction gearing, drive coupling between the final drive gear and the valve stem, and travel limiting devices. The rotational element can be either a circular shaft or a table. Circular shafts often include keyways while tables provide a bolt pattern for mounting other components.

Linear electric valve actuators provide linear motion via a motor-driven ball screw or ACME screw assembly. ACME screws typically hold loads without power but are usually less efficient than ball screws. Ball screws are power screws with a train of ball bearings riding between the screw and the nut in a re-circulating track. They exhibit lower friction and higher efficiency than lead screws. With linear electric valve actuators, the load is attached to the end of a screw or rod and is unsupported. Typically, the screw is belt or gear driven. The linear electric actuator will include the electrical enclosure, electrical motor, reduction gearing, valve stem drive nut/bushing, and travel limiting devices. General specifications for both rotary and linear electric valve actuators include:

Failsafe method- Failsafe methods involve the actuators turning off or on during the event of a power outage or loss of control signal. The actuator will either opens or closes depending on the requirement of the system.

AC or DC voltage- AC or DC voltage requirements will depend on the voltage available in the system. The actuator should be able to provide its rated torque within tolerances. The tolerance

More information on the specifications for rotary and linear motion valves can be found on Engineering360's How to Select Valve Actuators page.

Features for electric valve actuators include:

Limit switches- The actuator has an electromechanical limit switch (contacts) or a non-contact proximity sensor that allows the position / status of the actuator to be monitored from a remote location using proper connections. Usually the signal (or lack of a signal) generates some action in the process.

ed in proportion to the error between the two signals.

Integral pushbuttons and controls- The actuator has controller options that enable the actuator to be operated locally.

Manual overrides- Handwheels, levers, and hydraulic hand pumps which can be used to manually override electric value actuators in the event of an emergency. This safety feature is highly recommended for use in emergency situations which may require the valve to be actuated manually.