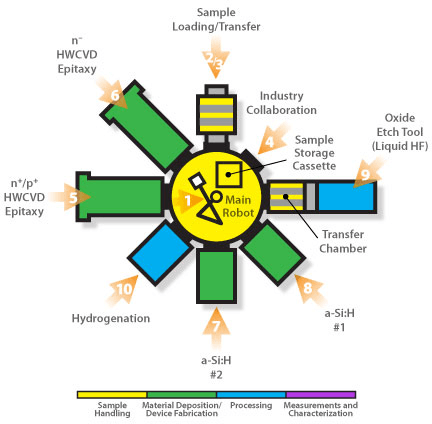 By arranging diverse processes around a single automated handler, cluster tools impart a number of specific benefits to chip manufacturing:

All semiconductor cluster tools consist of three components or groups of components: a number of process/cleaning/cooling chambers, two chambers for loading and unloading, and a central robot for transferring wafers between chambers.

These three component groups are general and may vary. For example, the loading and unloading chambers are typically load locks, environmentally isolated wafer handlers similar to airlocks. Depending on the system's intended application, there may be as few as two or as many as eight or more process chambers, along with one or several robots.

A basic cluster tool design can be seen in the image of a vapor deposition system at right. This particular image classifies each component as related to handling, deposition, and processing.

As discussed below, cluster tools are designed to accomplish a specific fabrication process. Physical vapor deposition (PVD), which involves the formation of thin films on a chip by evaporation or sputtering, is a common manufacturing process which may be automated using a cluster tool.

An example PVD system frequently consists of two clusters attached to a single mainframe. Each cluster—the transfer cluster and buffer cluster—has its own robot and separate processing chambers.

The typical path of a wafer through such a system is illustrated by the diagram below. Square blocks represent chambers serviced by the buffer robot, while diamond-shaped ones indicate chambers within the transfer unit.

Semiconductor cluster tools may be designed with the aid of published standards and specifications. Example standards include: