Show all Catalysts and Initiators Manufacturers

Catalysts and initiators are chemicals used to start, promote, or slow chemical reactions.

Catalysts affect chemical reactions by providing alternative pathways for the formation and breaking of bonds; for this reason they are considered a type of reagent. Unlike many reagent chemicals, however, catalysts are not consumed when a reaction occurs. (Although they are not consumed by the process itself, catalysts may be inhibited, destroyed, or similarly deactivated through secondary processes such as coking, dissolution, and evaporation.) Catalysts are useful because the alternate pathways typically use less energy than it would take to activate an uncatalyzed reaction. Catalytic action can also make it possible to perform chemical processes at lower temperature and/or pressure, thereby reducing fuel resources necessary to provide a special reaction environment.

The video below provides an excellent technical introduction to catalysis and the effect of catalysts on activation energy and reaction rate.

In addition to the formation of new paths, catalysts may also reduce energy consumption by stabilizing the reaction through the transition state, as well as temporarily destabilizing the reactants themselves. The free energy graph below illustrates how catalyzed reactions reach an identical product by using less energy. 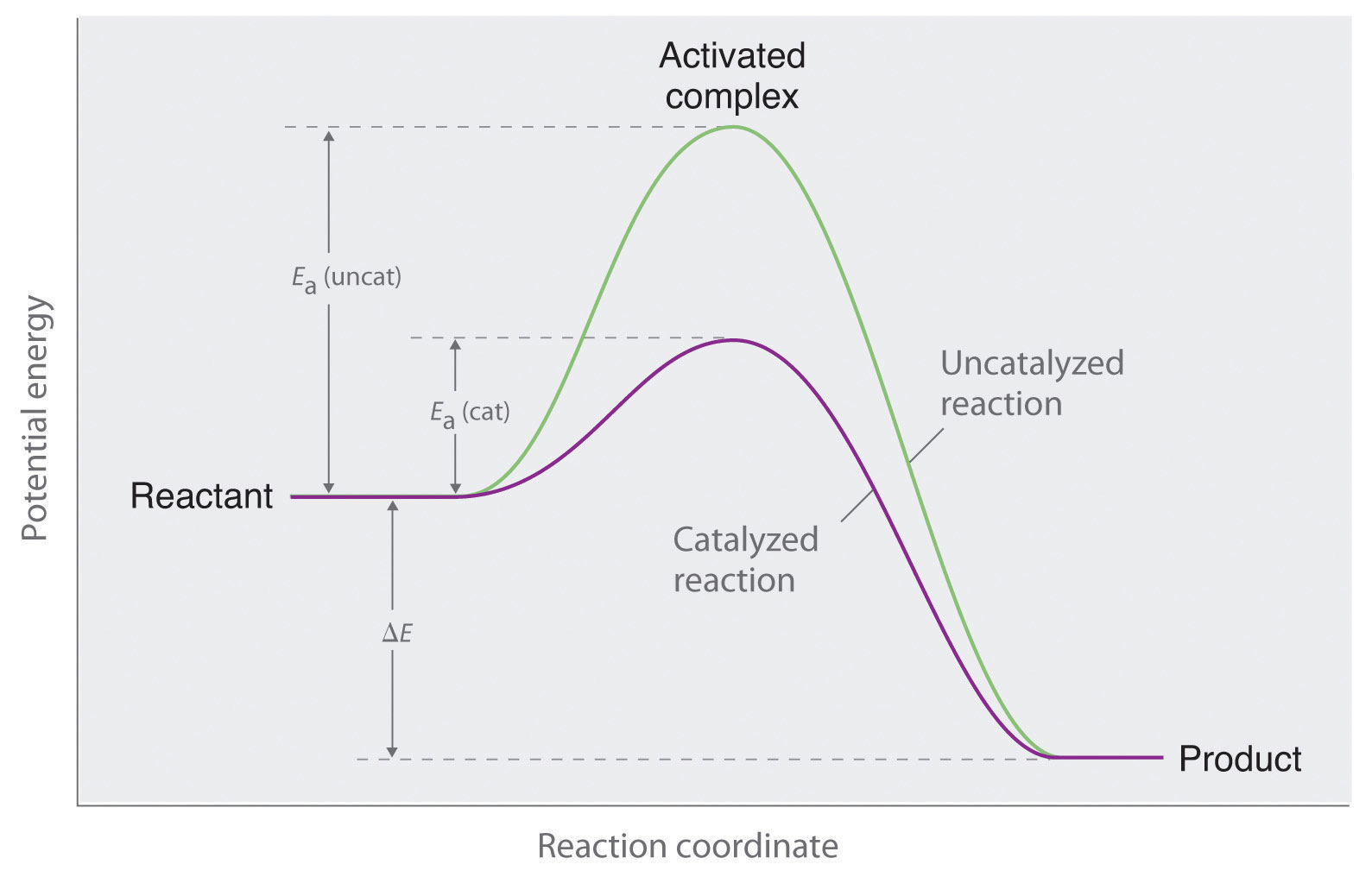 The vast majority of commercial chemical products use catalysts during their production process. They are becoming increasingly prominent — due to their ability to reduce chemical waste — with the rise of sustainable ("green") chemistry.

A catalyst's mechanism is achieved through the catalytic cycle, which is often visually portrayed as a loop due to the regenerative nature of the process. The image below illustrates a reaction in which the combination of reactants A and B produces compound C (A+B=C). The catalyst (X) first combines with reactant A, then adds reactant B, producing XAB. At this point the reaction occurs, producing XC, with C being the intended product. The catalyst then separates from C; if the catalyst is not destroyed through a secondary process the cycle is free to recommence. 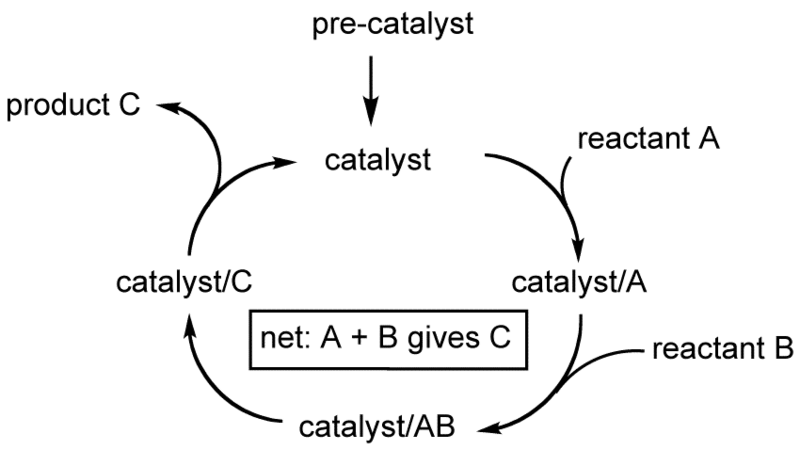 Catalysts may be broadly classified as either homogeneous or heterogeneous. 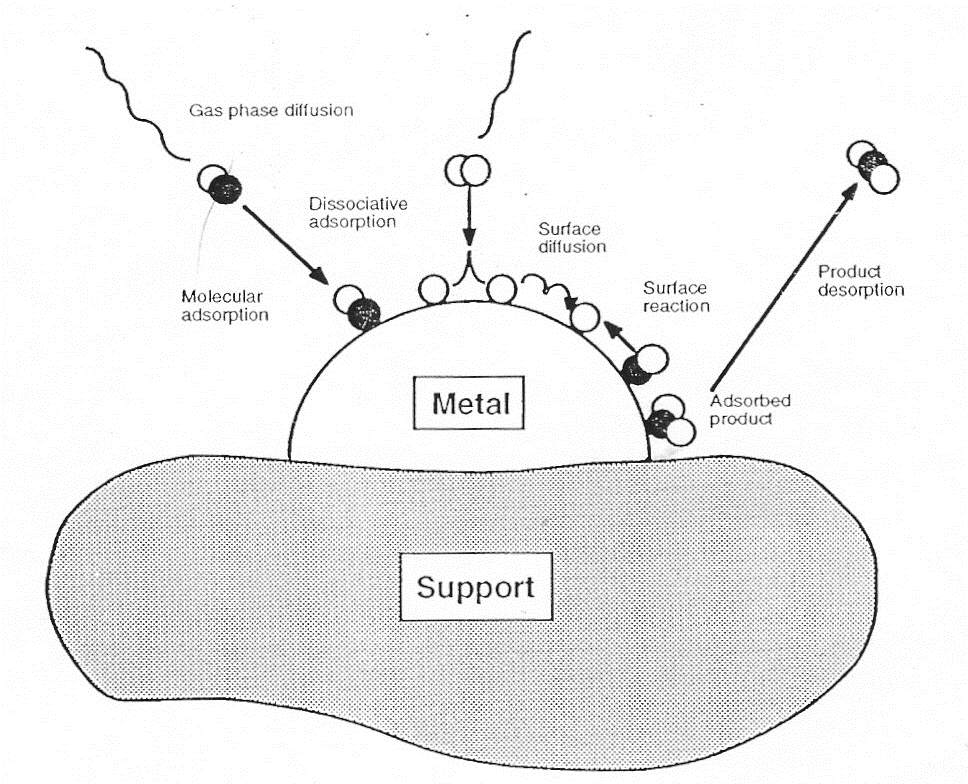 Homogeneous catalysis is less common than the heterogeneous type because, in the former process, separation of the catalyst from the product does not occur naturally, and performing this process manually requires extra time and costs. However, there are certain chemicals — such as ethane-1,2-diol, shown below — which are manufactured using liquid acid or base catalysts. The image below shows the all-liquid production of ethane-1,2-diol by adding water to epoxyethane. In this case the catalyst is a trace of liquid acid, from which a hydrogen ion functions as the catalyst.

Catalysts may be broadly used in any industry involving chemical reactions. Their most obvious application is in the production of chemicals and other compounds, but catalysts may be used in a wider variety of industries as well. Some of these industries, as well as the processes involved, are listed below.

Catalysts are typically specified by their mechanism and use, some of which are lised below.

Catalysts and initiators may be produced, used, and tested based on various specifications and standards. Some common standards are listed below.