Nanomaterials are materials possessing one or more dimensional features having a length on the order of a billionth of a meter, or 10-9, to less than 100 billionths of a meter (1 to 100 nm). To illustrate this size, there are 25,400,000 nanometers in an inch and on a comparative scale, if a marble were a nanometer, than one meter would be the size of the earth. They can be natural or manmade and they have a wide variety of applications

The term nanomaterial includes all nanosized materials, including materials that can be engineered or found in nature. They are important because they exhibit unique properties because of the size of their features and scientists and engineers have learned how to manipulate and understand the relationship of their properties to size. The National Nanotechnology Initiative (NNI) website puts these ideas in a simple phrase, "At the nanoscale, the physical, chemical, and biological properties of materials differ in fundamental and valuable ways from the properties of individual atoms and molecules or bulk matter." 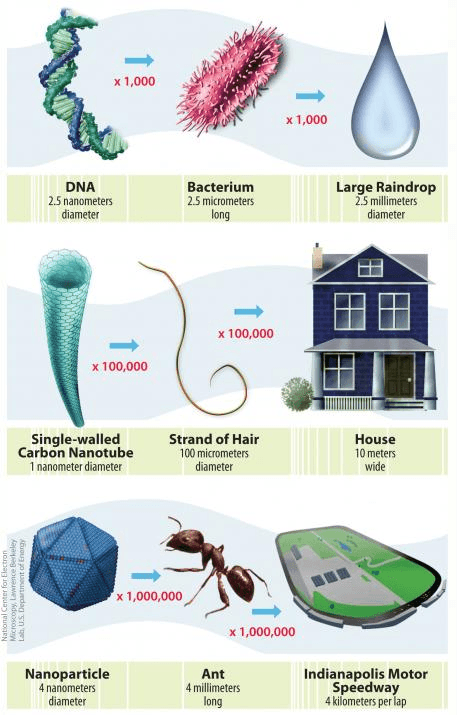 Recent discoveries in areas such as microscopy have given scientists and engineers new tools to observe and manipulate the phenomena that occur when matter is organized at the nanoscale level. The scanning tunneling microscope (STM) and the atomic force microscope (AFM) have made nanotechnology possible to enable scientists to utilize the unique physical, chemical, mechanical, and optical properties of materials that naturally occur at that scale. Nanomaterials fall under the field of nanotechnology and the events that occur at the nanoscale level are based on "quantum effects" and physical effects such as expanded surface area.

How Nanomaterials are Made

'Nanomaterials' is a term that includes all nanosized materials, including engineered nanoparticles, incidental nanoparticles, and nano-objects like those that exist in nature. Nanomaterials exist in nature in the form of biological materials or a byproduct of human activities. For instance, hemoglobin is 5.5 nanometers in diameter and biological ion channels can be as small as a few tenths of a nanometer. Natural nanomaterials such as smoke from fire and sea spray exist in the air around us. Manmade nanomaterial byproducts include automobile exhaust and welding fumes. Scientists have already copied the nanostructure of several natural items including the lotus leave to create water repellent surfaces beings used to make stain proof clothing and spider silk, which is naturally reinforced with Nanoscale crystals. Bottom-up builds products by building them up from atomic- and molecular-scale components. The process involves manipulation or synthetic methods of biochemistry in direct assembling subnanoscale building blocks, such as atomic molecular and supramolecular elements into required nanoscale patterns. It can be a very time consuming process and is therefore better for biomedical, chemical and physical sensors than large scale molecular electronics and computer parts. The fabricaion strategy must occur in parallel or in arrays to self-form groups of atoms fast enough to produce useful structures of macroscopic size. Further research is being done to create self-assembling structures that will put themselves together and reduce the waste of top-down approaches. Currently, the best bottom-up approach is nano-manipulation which allows for precise control over single atoms and nanoscale particles for the formation of nanostructures.

Top-down reduces large pieces of materials to the Nanoscale level. The process has evolved from lithographic techniques, requiring larger amounts of materials which can lead to waste from the discarding of excess material. Another difference from the bottom up approach is that in the top-down approach, the parts or chips are both patterned and built in place so that no assembly step is needed. It is a very useful process for the evolution of the electronics, computer, photonic, and microsystem industries.

Combined bottom-up and top-down approaches will soon be the standard practice.

Chemical vapor deposition (CVD) is a process in which chemicals react to produce very pure, high-performance films. CVD involves flowing a precursor gas or gasses into a chamber containing one or more heated objects to be coated. A chemical reaction occurs on or near the heated surfaces, resulting in the deposition of a thin film on the surface. CVD can be done with a variety of chemicals for a wide range of applications. The process can be enhanced with plasmas and ions to increase deposition rates and/or lower temperatures.

Molecular beam epitaxy (MBE) is a technique for epitaxial growth via the interaction of one or several molecular or atomic beams that occur on a surface or heated substrate. Epitaxy means the arrangement of atoms on an order substrate. Three factors define the MBE process; Thermal -energy molecular or atomic beams, substrate with elevated temperature, and high vacuum (10x 10-3 to 10x10-9 Torr). The processes occurring during film growth include surface adsorption, surface dissociation and migration, lattice incorporation and thermal desorption.

Molecular beam epitaxy (MBE) means creating a single crystal by building up orderly layers of atoms on top of a substrate (base layer). Image Credit: explainthatstuff.com

Atomic layer epitaxy, also called atomic layer deposition, is a process for depositing one-atom-thick layers on a surface. Films are deposited by a repetitive sequence of single layer deposition cycles composed of several gas-surface interactions that are all self-limiting. The crystal lattice structure achieved is thin, uniform and aligned with the structure of the substrate.

Dip pen lithography is a process in which the tip of an atomic force microscope is "dipped" into a chemical fluid and then used to "write" on a surface, like an old fashioned ink pen onto paper. This is an effective technique for transporting molecules from the tip of an atomic force microscope (AFM) to substrates at resolutions comparable to those achieved with much more expensive and sophisticated lithographic methods.

Nanoimprint lithography is a process for creating nanoscale features by "stamping" or "printing" them onto a surface. A hard mold (mask) with a surface relief pattern is used to emboss a layer of resist. After heat and pressure are applied the mold is revoked and the residual layer of resist is (dry) etched away to leave behind a fully patterned resist. 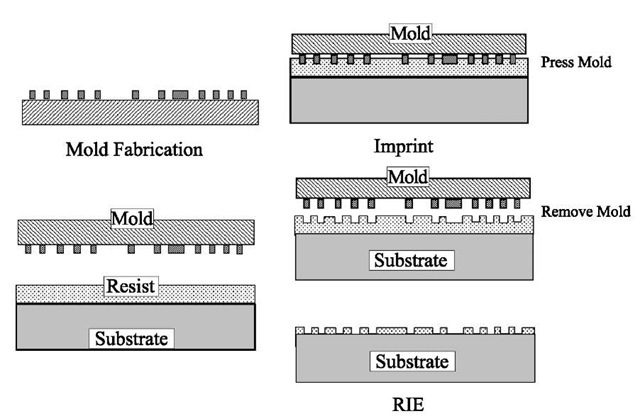 Roll-to-roll processing (R2R) is a high-volume process to produce nanoscale electronic devices on a roll of ultrathin plastic or metal. The process is similar to nano-imprint lithography but rollers allow for a larger substrate to be patterned faster.

Self-assembly describes the process in which a group of components come together to form an ordered structure without outside direction. Self -assembly is the ultimate goal for many nanomaterial making processes because of the reduced chance for error and reduction of waste.

The properties exhibited by a nanomaterial are related to the composition, and process that the material was created by. Controlling the process parameters such as temperature and pressure as well as composition makes the material stronger, lighter, more durable, water-repellent, anti-reflective, self-cleaning, ultraviolet-or-infrared-resistant, antimicrobial, electrically conductive, etc.

Different types of nanomaterials and nanotechnology products are named for their individual shapes and dimensions.

Generally, materials types include crystalline or amorphous properties. Nanomaterials represent materials from a structural perspective somewhere in between the two types.

Crystalline materials are composed of an orderly repeating array of atoms, molecules or ions. They come in two general forms; single crystalline, which have single atoms arranged periodically on a three dimensional lattice; and polycrystalline, which is a consolidated assembly of small single crystals. This material has short and long range order meaning that the manner in which atoms are arranged at any one location within a crystal is identical to the arrangement at any other location. Most metals are polycrystalline and when they break the grains or crystallites can be observed randomly orientated within the material. The surface between grains is called the grain boundary.

Amorphous materials are non-crystalline. They have short range order but not long range order. This material is not composed of grains. A broken edge is observed at a smooth surface because they are considered a cooled liquid rather than a true solid. Polymers and ordinary glass are amorphous materials. 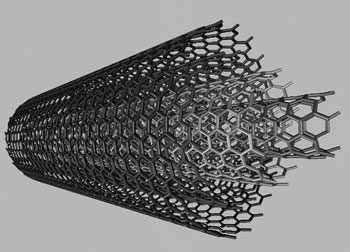 Nanomaterials are designed in a variety of shapes including particles, tubes, wires, films, flakes, or shells that have one or more nanometer-sized dimension. For example, carbon nanotubes have a diameter in the nanoscale, but can be several hundred nanometers long or even longer. Nanofilms or nanoplates have a thickness in the nanoscale, but their other two dimensions can be much larger.

Particle and feature size is the diameter or width of nanomaterials and nanotechnology products. On consolidated nanomaterials or nanodevices, this is the diameter or width of the nanoscale feature or crystal. Size is an independent degree of freedom and can therefore be manipulated independent of composition, temperature and pressure to create materials that possess new properties. Scientists are trying to produce nanomaterials with tightly controlled size and size distribution so that the properties associated with size are observed and distinguishable. In order for the unique size-dependent properties to be utilized, the nanomaterials must be composed of monodisperse or nearly monodisperse nanoparticles. Often, specific surface features are responsible for the unique properties of the material so it is critical that processing is controlled to yield size and the particular surface features responsible for the materials unique characteristics.

The size of the particle or grain also influences properties of the grain boundary. As the grain size decreases the proportion of molecules or ions at the grain boundary increases. The rato of molecules or ions at the surface to the total in the grain is proportional to 1/r where r is the radius of the particle or grain. The size dependent properties that emerge in the nanometer length domain are in part a result of this increased ratio.

Specific Surface Area (SSA)- SSA is measured in terms of mass per unit area and is easier to determine than crystal size. SSA can provide an indication of average particle size, but not particle size range or distribution. Nanoscale materials have far larger surface area then similar volumes of larger-scale materials, meaning more surface is available for interaction with other materials around them. Typically, gas absorption techniques such as the Brunauer-Emmett-Teller absorption (BET) technique are used to determine SSA.

Nanomaterials and nanotechnology has a wide range of applications from baseball bats and tennis rackets to catalysts for refining cure oil and ultrasensitive detection and identification of biological and chemical toxins. The benefits of this technology come from the ability to tailor the structure of the material at the Nanoscale to achieve specific properties. According to the National Nanotechnology Initiative (NNI), there already exist over 800 everyday commercial products that rely on Nanoscale materials processes.

Nanomaterials have been linked to several risks associated with material hazard and exposure to the material. Care should be taken when handling nanomaterials. Safety precautions such as engineering controls, administrative controls, and personal protective equipment is recommended to avoid exposure to nanoscale materials.

According to the NNI, nanotechnology relies on standards through at least three concepts:

1. Documentary standards define agreed-upon terminology or standard language for a field of science, engineering, or technology; they are agreed-upon means for conducting measurements; agreed-upon performance characteristics of instruments or commercial products; and particularly, they are documented agreements on means to facilitate trade and commerce.

2. Standards often refer to standard reference materials, materials that are certified by a national standards laboratory to have specified characteristics traceable to an international system of the fundamental system of physical units of measurement.

3. Standards generally refer to the fundamental physical realization of the units of measurement defined in the International System of Units (SI).

Around the world, there are numerous nanotechnology standards-setting groups that develop voluntary standards. Some of the leading standards setting organizations and their relevant nanotechnology committees are: