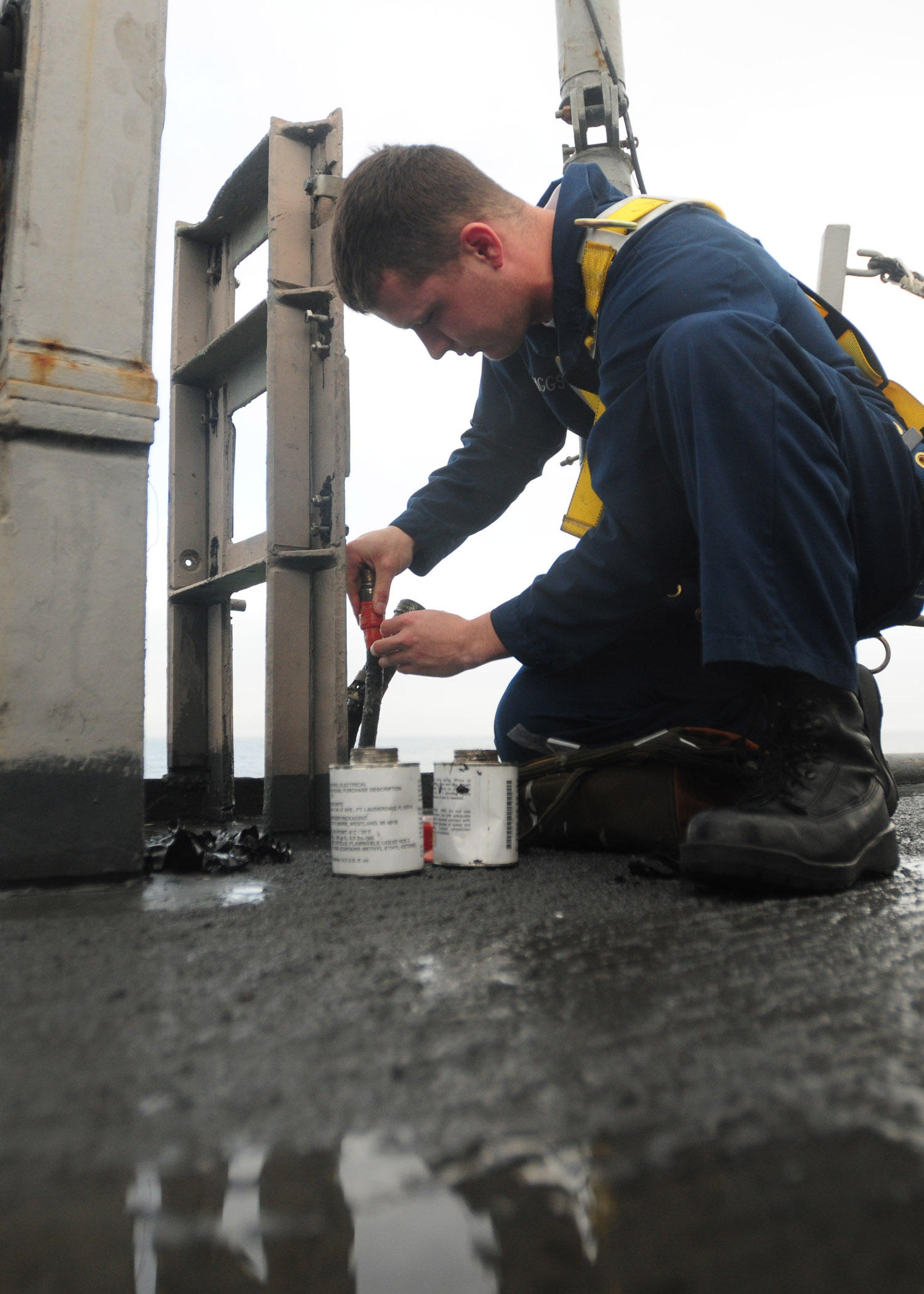 Polysulphides are a type of chemical compound that is based on a structure having chains of sulphur atoms. Polysulphide elastomer was discovered in 1926 by an American chemist while he was attempting to obtain ethylene glycol for use as antifreeze. The elastomer was commercialized under the trade name Thiokol (after the Greek theion, “brimstone” [sulfur] and kommi, “gum”), which eventually became a generic label. It is known for its excellent resistance to solvents and lubricants. This polymer is mainly used in the form of a low-molecular-weight liquid that cures in place to create an elastomeric seal. The sulfur content is high, about 80 percent by weight, making the elastomer a high-density material with a high resistance to swelling by hydrocarbon oils. However, the low stability of the sulfur-sulfur bond also causes a pronounced tendency to relax and flow under pressure. The principal uses are in oil-resistant and weather-resistant seals and gaskets. They are also used in gasoline hoses and as binders for solid rocket propellants.

Products based on polysulphidic polymers can be formulated to be high or low modulus through the choice of polymer, cure system, or compound. They are considered to be durable in a number of adverse environments. Despite this, their resistance to heat is not exceptional. The upper temperature limit for continuous use is less than 100°C and depends, to some extent, on the formulation. The structure of the polymer makes polysulphides inherently resistant to UV and oxidation, but this is influenced by formulation and, in particular, by polymer content. There is plenty of accumulated evidence to relate durability of polysulphide sealants to polymer content, in all applications.

They can be used in a wide range of applications, such as aircraft fuel tanks, electrical potting, and industrial tank liners. They have been successfully used in corrosion protection of offshore structures and provided vibration resistance for electro-optical devices. Polysulphide adhesives and sealants are often used in construction to seal off joints and channels. Polysulphide sealant provides a waterproof seal minimizing the risk of water leaking into an area and causing damage or erosion. Adhesives and sealants made with sulphides are commonly used in large civil engineering applications, including sealing channels in reservoirs and dams, culverts, canals, and flood control waterways. They are also used in high traffic public areas such as in the expansion and contraction joints in sidewalks or floors because they can form a flexible bond that expands and contracts with weather conditions without breaking down. Polysulphide adhesives and sealants are used in the aerospace industry to seal fuel tanks and aircraft fuselages. Since polysulphide adhesives and sealants are resistant to fuels and other chemicals, they can provide a secure, long-lasting seal in these aviation components. A polysulphide adhesive may also be used as a sealing agent between the wooden planks or decking of a boat.

Polysulphide adhesives and sealants are applied using a caulking gun or can be poured directly from the container for large surface area applications. These sulphide based polymers are often two-component sealants, using a manganese-dioxide curing agent. The surface area must be cleaned and in some cases specially treated for the polysulphide adhesive to adhere properly. For example, non-porous materials such as glass or metal should be cleaned with toluene before using a polyadhesive resin.

As can be imagined having sulphur as a major component and “brimstone” as part of an early name, polysulphide adhesives and sealants have a peculiar but not disagreeable odor that remains even in the cured state. The odor is not harmful since the volatile components are extremely low. Volatile masking agents and scents introduced in efforts to mask this odor were actually more objectionable than the basic odor and are not used.