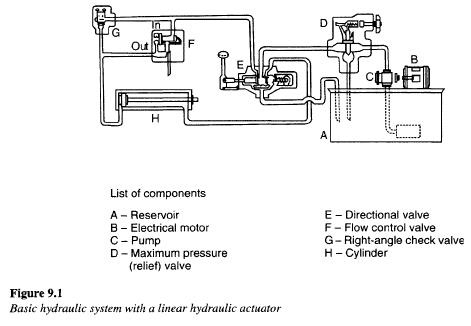 A basic hydraulic system. This system uses a pump (C) to move fluid from the reservoir (A) in order to provide linear motion via a cylinder (H).

Hydraulic fluids are typically classified by their function within a system; a single fluid can fulfil more than one of these functions. Five broad function types include:

Regardless of primary function, all hydraulic fluids share certain properties which render them suitable for use in hydraulic systems.

While density, specific gravity, and other physical properties are important in hydraulic oil composition and use, viscosity is key to design and system compatibility. Simply defined, viscosity is a fluid's resistance to flow. Fluids with high viscosity, such as molasses, flow slowly, while low-viscosity materials such as gases flow freely. Water is often regarded as a medium-viscosity fluid.

Analysis of an oil's viscosity is key to predicting its behavior when moving through a hydraulic system. Oils which are too thin (low viscosity) will not seal properly, leading to pressure loss, leakage, and accelerated component wear. Fluids which are too thick (high viscosity) reduce the system's efficiency due to excessive strain on pumps and valves. 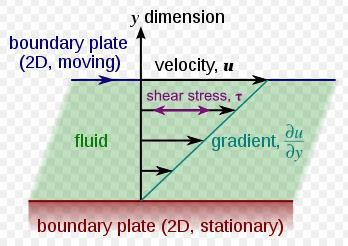 Viscosity can be measured as absolute or kinematic. Absolute (or dynamic) viscosity is the force required to move one horizontal plane with respect to another at unit velocity, while both planes are maintained a unit distance apart by the fluid. Absolute viscosity is defined by Newton's Law of Friction, described by the following differential equation:

Kinematic viscosity is typically expressed in m2/s, a measure often referred to as stokes (St). Because this unit is too large to practically express typical oil viscosity, centistokes (cSt) are usually employed.

Kinematic viscosity of oil decreases as temperature increases. This attribute must be considered when selecting a fluid for a specific system environment.

Several viscosity classes are listed below. ISO 3448 defines an acceptable midpoint and allows for variation of ±10%; this rule was used to calculate the minimum and maximum values for each class. Values are provided in centistokes.

Oils manufactured for more extreme, outdoor conditions typically have higher VG class numbers. For example, VG 10 fluids are most appropriate for indoor control systems, while VG 32 is suitable for temperate outdoor use and is common in automotive applications. VG 150 and above is reserved for extremely high temperatures.

The table below lists most of the common, standardized hydraulic oils. Nearly 85% of manufactured oils are based on mineral oil. The remaining 15% of fluids are based on environmentally acceptable bio-bases or fire-resistant (sometimes aqueous) solutions.

Transmission and final drive fluids are related to but distinct from hydraulic fluids. They may technically be used in dedicated hydraulic systems but are typically designed for compatibility with seals and other components within transmissions.

Transmission fluids are used to operate and lubricate transmission components. Transmissions may be designed as manual or automatic, and the fluids involved are drastically different for each system type.

Most automatic transmission systems use automatic transmission fluid (ATF) as a hydraulic fluid, as well as a gear lubricant. Automatic transmission fluids may be pressurized by a pump and regulated by valves in a similar manner to other hydraulic systems. ATFs must be precisely designed to accommodate temperature extremes, exacting lubrication qualities, and compatibility with all transmission components. For the latter reason, major manufacturers design specific fluids to be used with their vehicle transmissions. The stability, precision, and long lifetime of ATFs is achieved by using multiple additives—including dispersants, antioxidants, and friction modifiers—in their design.