Industrial lubricants are oils, fluids, greases, and other compounds that reduce friction, binding, wear, or exclude moisture. Their primary function is to displace solid surfaces with a fluid film. They are otherwise used to modify surface properties, regulate temperature, or remove debris. The ideal lubricant minimalizes solid-to-solid contact and reduces any amount of friction that would otherwise impede movement and induce wear.

The thickness of a fluid film is dependent on a fluid’s viscosity, the load between the mating surfaces, and the speed at which those surfaces move with respect to each other. There are four lubrication regimes, also referred to as modes of lubrications, defined by the thickness of the fluid film as follows:

Elastohydrodynamic lubrication regimes are formed when higher loads exist or when there is nonconformal contact between the lubricated surfaces. This causes a localized load-bearing area that imposes some amount of elastic strain across the solid surfaces. The extreme pressures experienced affect the viscosity of the lubricant. This change in viscosity allows the fluid to support the load, effectively lubricating point contacts in applications such as ball and roller bearings.

Mixed lubrication regimes insufficiently separate solid surfaces allowing some amount of solid surface interaction. As the name suggests there is an active fluid film that lubricates the surface while asperities, which are surface irregularities, cause what can be referred to as micro-elastohydrodynamic lubrication.

Boundary lubrication regimes allow the asperities to support the load, as the surface roughness exceeds the thickness of the fluid film. In these circumstances the lubricant no longer acts directly to limit friction. To effectively lubricate surfaces experiencing a boundary lubrication regime, extreme-pressure (EP) additives, boundary additives, or solid lubricants can be used to decrease the negative effects of the solid surface contact.

The stribeck curve is a graphical representation of how friction relates to fluid viscosity, load, and speed. It is used to illustrate the coefficient of friction under various operating conditions. The lubrication parameter, directly related to fluid film thickness, is a function of speed, load, and viscosity, and is shown on the x-axis. An increase in viscosity, a decrease in load, or an increase in speed each reflects a larger fluid film thickness and a larger lubrication parameter. The coefficient of friction has a steep drop off between boundary and mixed lubrication regimes, a minimal value as it enters hydrodynamic lubrication regimes, and then begins to increase thereafter due to the negative effects of fluid drag. 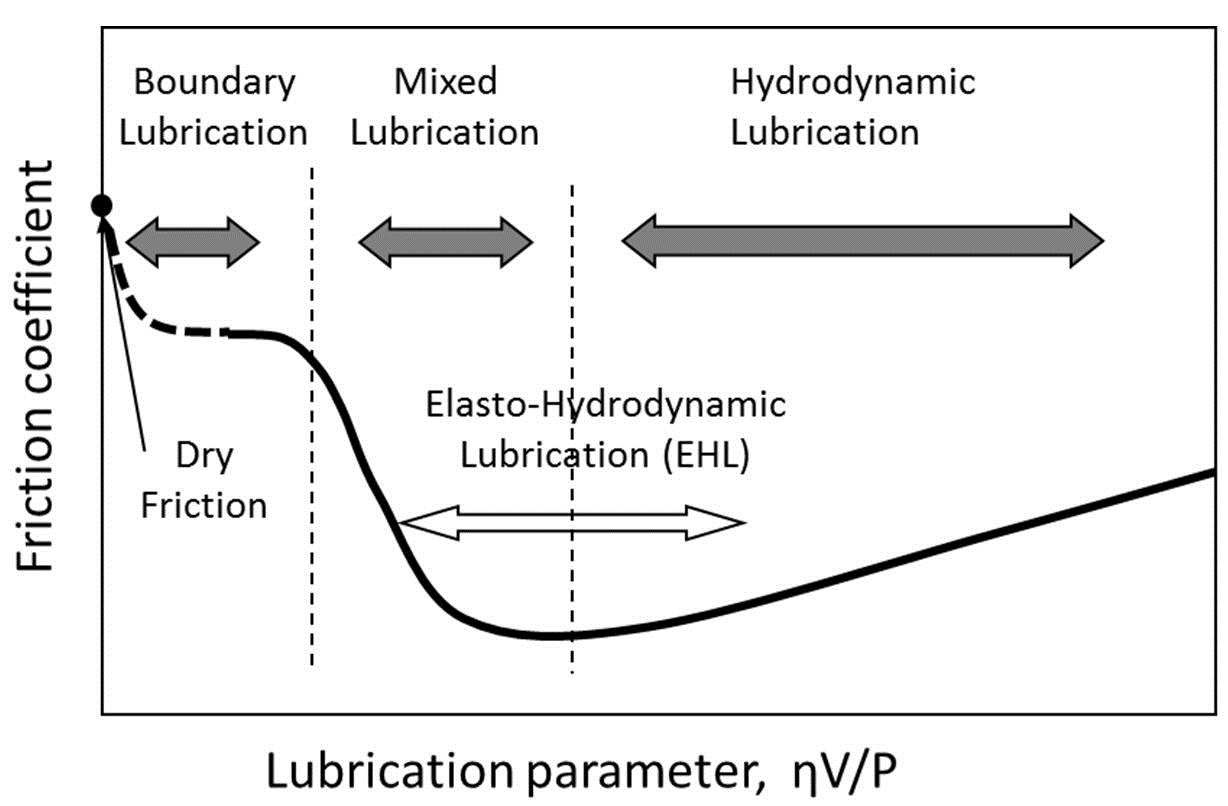 Industrial lubricants are available in a variety of forms, compositions, viscosities, and may be application specific.

High viscosity oils exhibit higher shear stresses and thicker fluid films. The thicker fluid film is able to support greater loads and function at lower speeds, although their resistance to flow increases the amount of friction between the mating surfaces.

Greases are semi-solids formed by the dispersion of a thickening agent in a base fluid. The thickening agent serves as a matrix that holds the lubricant in place, while supplying some amount of ingress protection. The oil or base fluid is the active lubricating agent.

Petroleum and mineral oil lubricants are functional fluids derived from petroleum, a naturally occurring hydrocarbon-based fluid with various molecular weights. Petroleum-based lubricants tend to be more viscous, temperature sensitive, and possess a lower break down temperature than synthetic or solid lubricants. Petroleum products are refined from a base stock that is either aromatic, napthenic or paraffinic in origin.

Synthetic lubricants do not contain a petroleum or mineral oil base, but provide exceptional fire resistance and cooling performance. They are based on synthetic compounds such as silicone, polyglycol, esters, digesters, chlorofluorocarbons (CFCs) and mixtures of synthetic fluids and water. The characteristics, cost, and heat transfer performance of semi-synthetic fluids fall between those of synthetic and soluble oil fluids.

Lubricants are designed to produce a desired effect in known operating conditions. They are often application specific as each application requires unique properties under diverse environmental conditions.

Micro-dispersions are oils or lubricating fluids that contain a dispersion of solid lubricant particles, such as polytetrafluoroethylene (PTFE), graphite, molybdenum disulfide, or boron nitride (BN) in a mineral, petroleum, or synthetic oil base.

Low-foaming or non-foaming additives break out entrained air. Entrained air can cause pump damage due to cavitation. Foaming can also reduce the cooling ability and the bulk modulus (or stiffness) of the fluid.

Dielectric greases and insulating fluids are insulating oils, greases, transformer oils, and fluids that have a high dielectric strength and are used in transformers, capacitors, EDM machining, and other electrical device applications.

General Properties of a Lubricating Oil