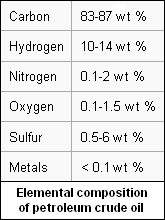 The term petroleum is derived from the Latin prefixes petra, meaning rock, and oleum, meaning oil. The term can be used to describe any mixture of gaseous, solid, or liquid hydrocarbons found beneath the earth's surface. It is a naturally occurring hydrocarbon-based fluid with various molecular weights. Although the term petroleum is used as a broad term encompassing many different forms it has a well-defined elemental composition. 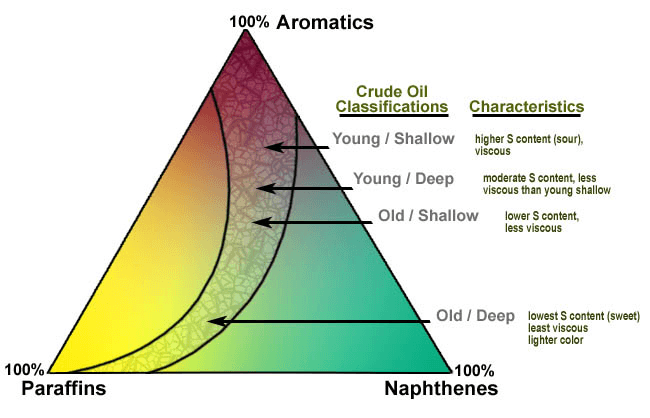 Aromatic petroleum derivatives have a benzene ring type chemical structure. They are also known as polycyclic aromatic hydrocarbons (PAHs). Aromatics exhibit some chemical behaviors of benzene such as higher reactivity and higher solvency when compared to paraffinic and naphthenic products. The reactive nature of aromatic base oils makes them useful as petrochemical building blocks. They can be used to produce synthetic fluids and other petrochemical compounds. Naphthalene can be considered the simplest aromatic hydrocarbon, but is often classified to its own group.

Naphthalene has the chemical formula C10H8 and structurally appears as two fused together benzene rings. Naphthalene has a characteristic "moth ball" odor. Naphthenic oils are used as intermediates for producing solvents, surfactants, and other petrochemicals.

Paraffin is an alkane hydrocarbon with the general formula (CnH2n+2). Paraffin or paraffinic petroleum derivatives include paraffin oils and paraffin wax. Paraffin wax consists of alkane mixture where chain length ranges from 20 ≤ n ≤ 40 range. The hydrocarbon chains are found in both straight and branched forms. Paraffin wax is solid at room temperature and begins to enter the liquid phase past approximately 37 °C (99 °F). Paraffin oil, like mineral oil, is a by-product from the petroleum distillation process. Paraffin based products are relatively non-reactive and have excellent oxidation stability. Paraffinic oils have relatively high wax content, high pour point, and typically a high viscosity index (VI).

The source of crude oil often dictates is functional use as the mixture may contain a larger portion of hydrocarbon that suit a particular need. Fuel and non-fuel products are separated or refined through the use of midstream processes such as distilling and cracking. 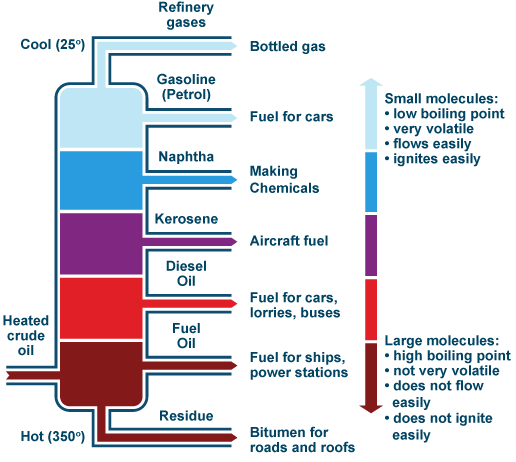 Distilling crude oil separates a mixture of hydrocarbons into its various component including light gases, petrol, naphtha, kerosene, diesel oil, fuel oil, and residue. The boiling point of these hydrocarbons is dictated by its chemical structure and the number of carbon atoms in the molecule. When distilling the temperature is elevated in order to vaporize the fluid. As the vapors rise through a distillation column they begin to cool and condense back to liquid form when the temperature drops below their boiling point. Several perforated trays allow the vapors to rise while collecting condensate at various temperature gradients separating crude oil into various fluid streams.

Cracking is a process used to breakdown large hydrocarbon chains into smaller chains. The process is driven by the change in entropy and is facilitated by introducing a high pressure and high temperature environment. This allows carbon atoms in larger molecules to become disassociated. There are two basic processes, thermal cracking and catalytic cracking. Base and process oils

Base oils and process oils are raw stock fluids, usually a refined petroleum fraction or a selected synthetic material, that is blended with additives in order to produce lubricants, greases, thermal oils, hydraulic fluids, and metal working fluids.

Bitumen, also referred to as asphalt, is a viscous liquid or semi-solid petroleum residue. It is predominantly used as a binder to consolidate aggregates in concrete and asphalt. Bitumen is obtained as a refined residue from fractional distillation or in other cases crude bitumen may be found as a naturally occurring petroleum deposit.

Mineral oil is petroleum by-product, produced by fractional distillation of crude oil. Mineral oils have cyclic and alkane components. Mineral oils are often the base stock or base oil in a lubricant, hydraulic fluid or heat transfer fluid formulations.

Petroleum-based feedstocks are used by the petrochemical industry to produce a wide range of materials and chemicals. The two most common petrochemical feedstocks are olefins and aromatics which are produced by cracking of naphtha or may be captured during fractional distillation. These feedstocks are the base stock used to form finished petrochemicals including solvents, chemicals, monomers, intermediates, base polymers, resins, fibers, gels, and other organic materials.

Petroleum based fluids are further processed to produce a wide range of industrial oils and fluids. Functional uses include the following:

The Encyclopedia of Earth | The Pennsylvania State University | the BBC | CIMCOOL