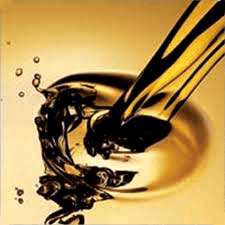 Quenching oil and heat treatment fluids are designed for rapid or controlled cooling of steel or other metals as part of a hardening, tempering or other heat-treating process. Quenching oil serves two primary functions. It facilitates hardening of steel by controlling heat transfer during quenching, and it enhances wetting of steel during quenching to minimize the formation of undesirable thermal and transformational gradients which may lead to increased distortion and cracking.

Oil has a major advantage over water due to its higher boiling range. A typical oil has a boiling range between 450ºF (230ºC) and 900ºF (480ºC). This causes the slower convective cooling stage to start sooner, enabling the release of transformation stresses which is the major problem with rapid water cooling. Oil is, therefore, able to quench intricate shapes and high-hardenability alloys successfully.

Film boiling, also known as the "vapor blanket" stage, occurs upon initial immersion. Contact between the hot metal surface and quenchant creates a layer of vapor (known as the Leidenfrost phenomenon) due to the supply of heat being greater than that which is carried off. The stability of the vapor layer, and thus the ability of the oil to harden steel, is dependent on the metal's surface irregularities, oxides present, surface-wetting additives (which accelerate wetting and destabilize the layer), and the quench oil's molecular composition (including the presence of more volatile oil degradation by-products). Cooling in this stage is a function of conduction through the vapor envelope and is relatively slow since the vapor blanket acts as an insulator.

As the part cools, the vapor blanket collapses at points and nucleate boiling (violent boiling of the quenchant) results. Heat transfer is fastest during this stage, with heat transfer coefficients sometimes over two orders of magnitude higher than during film boiling, largely due to the heat of vaporization. The boiling point of the quenchant determines the conclusion of this stage. The points at which this transition occurs and the rate of heat transfer in this region depend on the oil's overall molecular composition.

When the part has cooled below the boiling point of the quenchant, slow cooling occurs by convection and conduction (also called the "liquid" stage). Cooling rate during this stage is slow, and is exponentially dependent on the oil's viscosity, which varies with the degree of oil decomposition. Heat-transfer rates increase with lower viscosities and decrease with increasing viscosity. 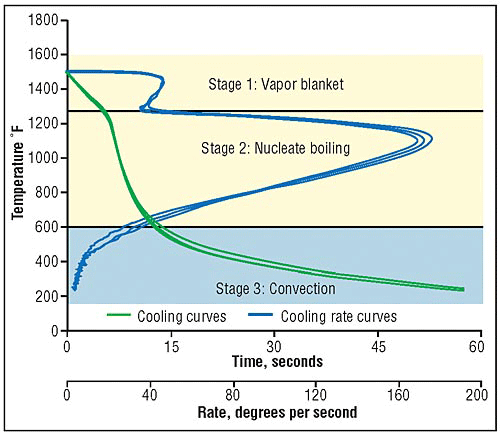 The ideal quenchant is one that exhibits little or no vapor stage, a rapid nucleated boiling stage and a slow rate during convective cooling. The high initial cooling rates allow for the development of full hardness by quenching faster than the so-called critical transformation rate and then cooling at a slower rate as the metal continues to cool. This allows stress equalization, reducing distortion and cracking in the workpiece.

This video shows the oil quenching of alloy steel:

When selecting quenching oils, industrial buyers will need to consider the chemistry, properties, and features of the fluid that are needed for the application.

The chemistry of the quenching media is the primary consideration in selecting the best fluid for the application.

Properties for describing heat treating fluids can be classified as either primary or secondary.

Primary properties are those which describe the performance of the fluid. These include cooling rate, thermal conductivity, viscosity, water content, and sludge formation. 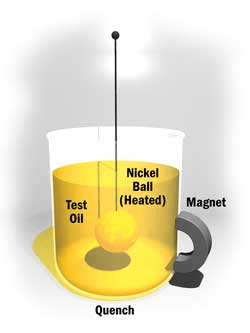 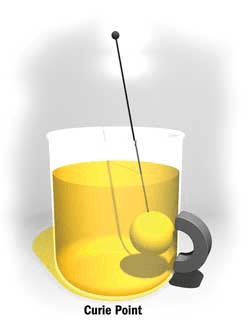 This property does not give any information about the cooling pathway, however (as demonstrated in figure 3); it merely gives the time required to cool to a certain temperature. 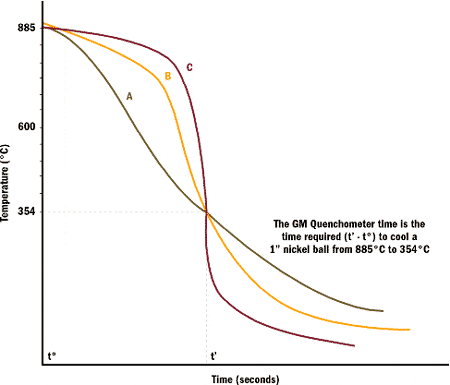 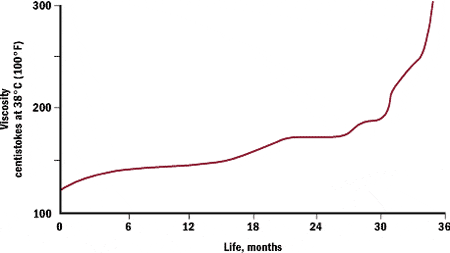 Figure 3 - Viscosity of a Martempering Oil as a Function of Time. Image Credit: Machinery Lubrication

These images show the differences in analytical spectra of new and degraded oils: 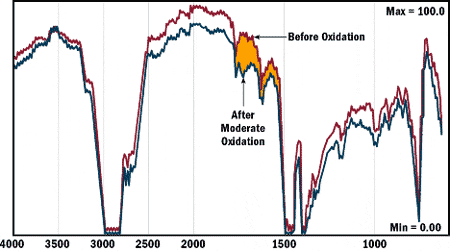 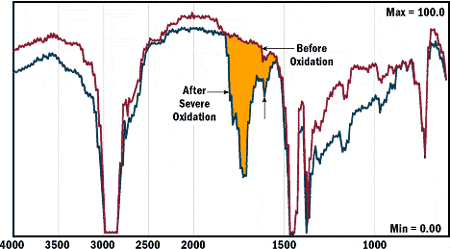 Secondary properties are those which describe a fluid's operating parameters. They include operating temperature, pour point, and flash point.

Quenching oils and heat treatment fluids can include a number of additional features which add versatility and functionality. Among these are biodegradable, low foaming, and water displacement characteristics.