Synthetic oils, greases and lubricants are formulated with chemically modified petroleum base oils or base fluids synthesized from other raw materials. The base fluid is combined with additives in order to produce a product with a controlled molecular structure and predictable properties. Synthetic fluids are more expensive than non-

Base oils are raw stock fluids, composed of either a refined petroleum fraction or synthetic material. They are the primary constituent which is blended with additives in order to produce oils, greases, and lubricants. They are classified into five categories per the standard published by the American Petroleum Institute (API 1509, Appendix E). Groups I, II, and III are used to denote various grades of petroleum or mineral oils whereas group IV and V are considered synthetic fluids. (Base and Process Oils Information)

Base oils in Groups I, II, II+, and III are refined mixtures of naturally occurring hydrocarbons. They are formulated with additives in order to produce petroleum or semi-synthetic fluids.

Group V base oils encompass all other base oils including alkylated naphthalene (AN), esters, polyether, polyglycol, silicone, halogenated hydrocarbons, and other synthetic fluids. As they are considerably more expensive than mineral oils and PAOs they are most commonly used as fluid additives or otherwise used for specialized industrial applications.

Alkylated naphthalene (AN) is produced by the alkylation of naphthalene with an alkylating agent and an acid catalyst. AN fluids exceed the performance of PAOs in oxidizing environments as well as provide improved hydrolytic stability. They also possess low volatility and good solubility characteristics. They may be used as an additive or as a stock fluid. 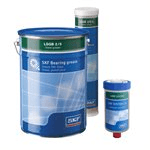 Esters, diesters, and polyolesters are organic compounds formed through a reaction with an acid and an alcohol which produces an ester and water. The chemical structure of the products used dictates the properties of the ester. Hydrolytic stability can be a concern for some esters as excess water can break down the ester, reversing the chemical equation.

Diester lubricants have improved fire resistance and oxidation stability. They also resist sludge and varnish formation due to their high solvency and are commonly used as a lubricant for reciprocating air compressors.

Polyolesters exhibit excellent high temperature properties and long-term hydrolytic stability. They are used in rotary screw air compressors that operate above 180° F as is common in mining, oil well drilling, multi-stage compression, and when operating in hot ambient temperatures. They resist oil breakdown and have improved physical properties when compared to PAOs and diesters.

PPEs are limited by a relatively high pour point, 40° F, and are commonly used in high vacuums, very high temperatures, or when a radiation-resistant fluid is required.

Polyvinyl ether (PVE) is a hydrofluorocarbon ether lubricant with excellent performance characteristics including superior lubricity and solubility with process fluids. PVE is exstensively useful in refrigerant system as it is miscible with halogenated (HFC) refrigerants.

Polyglycol lubricants are also used for hydrocarbon gas compressors as they reduce hydrocarbon solubility and have favorable viscosity and temperature characteristics. When operating under high pressures there can be issues with the formation of a hydrocarbon liquid phase. This phase can cause bearing failures if it is not separated from the lubricant before entering the compressor.

Silicone-based fluids include fluorosilicones, alkylmethylsilicones, and other silicone based fluids. They contain long linear polymers that easily slide past one another. They are also compressible and exhibit a low surface tension which limits their load carrying capacity. As a lubricant they are primarily used for light loads including metal-to-plastic and plastic-to-plastic lubrication applications. Their thermal stability, chemical inertness, and oxidation resistance allow for an extended life, making them suitable for electrical, chemical, and food and beverage applications as well as for closed systems.

Synthetic fluids have superior performance characteristics compared to mineral oils, but come at a higher cost. Synthetic fluids also have material compatibility issues and can decompose in certain industrial environments, crack or deteriorate plastic components, and can come out of suspension in the presence of leaded fuels used in aviation applications. Switching from conventional oil to synthetic oil can cause problems stemming from miscibility between the two fluids. Degradation to seal material can also pose a problem due to the high solvency nature of synthetic fluids. Care should be taken to ensure synthetic fluids are suitable for a given application.

Synthetic oils, greases, and lubricants are used in a variety of industries and applications. Some products are designed for aerospace, automotive, marine, or military industries. Applications include:

Synthetic Lubricants What Are They

Understanding the Difference in Base Oil Groups

What Makes a Lubricant Great?