Chemical process and petrochemical gases are used as feedstocks in the production of new chemical compounds or finished products. They may be pure gases or mixtures that are converted into such diverse products such as monomers for the production of plastics; water treatment chemicals; fuels for heat and internal combustion engines; and agents used for processing in the chemical, petrochemical, and pulp and paper industries. Chemical process and petrochemical gases are often used with other components to ensure safe processing and handling, including catalysts, adsorbents to purify gas and liquid processing streams, and sulfur recovery systems to remove sulfur compounds from fuel.

Other common chemical process and petrochemical gases include oxygen for creating building block chemicals such as nitric acid and ethylene oxide; nitrogen for providing an inert, nonflammable processing environment; and hydrogen for manufacturing ammonia and methanol, as well as for hydrogenation processes to produce soaps, plastics, insulation, and other specialty chemicals.

Some chemical process and petrochemical gases such as nitrogen, oxygen, argon, LNG, and petroleum gas are liquefied at high pressure for ease of storage and transport. At even lower temperatures these liquids can turn into a solid. Dry ice, a solid form of carbon dioxide, is a common example of a normally gaseous material (at ambient conditions) that has useful properties as a solid. Much of the carbon dioxide will sublimate, meaning it will move directly to the gaseous phase from the solid phase without becoming a liquid. Finally, some industrial gases- such as hydrogen - are highly volatile and need special handling and storage to ensure safe usage.

Industrial gas suppliers typically provide the gas as well as the storage and processing equipment necessary to facilitate transportation and proper usage. Industrial gas equipment may include storage tanks and distribution systems, vaporizers and pressure vessels (Dewars, cylinders, tanks), and cryogenic trailers. Each of these items typically includes a means of controlling pressure and flow.Additionally, there are more application-specific containers, including permeation tubes and safe delivery systems. Although not covered here (see Gas Generation Equipment), gases may be produced in an on-site generation system.

Bulk gases can be supplied by several methods: stationary cylinders, horizontally-mounted tube trailers, or pipelines. The stationary cylinder must be refilled periodically from a gas line or cryogenic tank trailer. Cryogenic tank trailers can deliver liquid gas in bulk form. Pipeline delivery is only available in areas near a gas production plant.

A gas cylinder or tank is a pressure vessel used to store gases at high pressure. 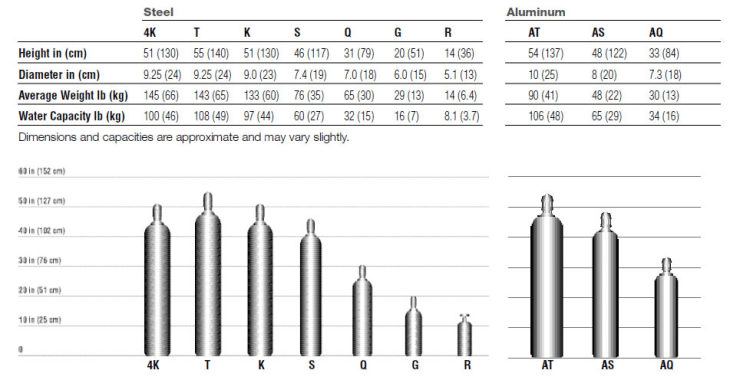 An insulated container used to store liquefied gases; having a double wall with a vacuum between the walls and silvered surfaces facing the vacuum. 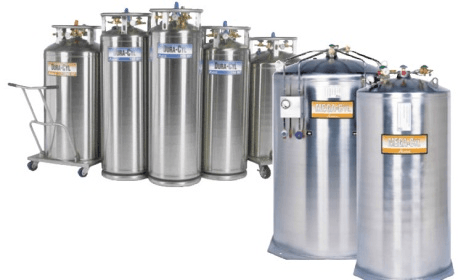 These systems produce a gas where it will be used. For example, there are complete systems to concentrate oxygen and nitrogen from air that are built within industrial facilities, thereby eliminating transportation costs. 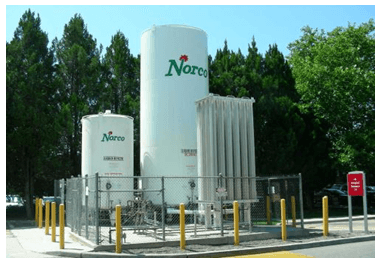 As mentioned earlier, gases are compressible and, as such, knowledge of the pressure generated by a gas as it relates to temperature and volume are critical to any application from both a performance and safety perspective.

From a performance perspective, knowledge of the boiling point and freezing point may be relevant, but the auto-ignition temperature, the minimum temperature required to ignite a gas or vapor in air without a spark or flame present, is of paramount importance.The flammable (or explosive) range is the range of a gas or vapor concentration that will burn or explode if an ignition source is introduced. Limiting concentrations are commonly called the lower explosive or flammable limit (LEL/LFL) and the upper explosive or flammable limit (UEL/UFL).

Other properties that are relevant to particular applications include:

Acetylene: a colorless, highly flammable or explosive gas; C2H2 is used for metal welding and cutting, and as an illuminant. Also called ethyne.

Butane: two isomers of a gaseous hydrocarbon; C4H10 is produced synthetically from petroleum and is used as a household fuel, refrigerant, and aerosol propellant, and in the manufacture of synthetic rubber.

Butadiene: a colorless, highly flammable hydrocarbon, C4H6 is obtained from petroleum and used in the manufacture of synthetic rubber.

Ethane: a colorless, odorless, gaseous alkane; C2H6 occurs as a constituent of natural gas and is used as a fuel and a refrigerant.

Ethylene: a colorless, flammable gas; C2H4 is derived from natural gas and petroleum, and is used as a source of many organic compounds in applications ranging from welding and cutting metals, to coloring citrus fruits, to its use as an anesthetic. Also called ethene.

Methane: an odorless, colorless, flammable gas; CH4, the major constituent of natural gas, is used as a fuel, and is an important source of hydrogen and a wide variety of organic compounds.

Propane: a colorless gas, C3H8 is found in natural gas and petroleum, and is widely used as a fuel.

Propylene: a flammable gas, CH3CH:CH2 is derived from petroleum hydrocarbon cracking and is used in organic synthesis. Also called propene.

Chlorine: a diatomic gas that is yellow-green in color. It is a halogen that combines easily with nearly all other elements. Chlorine irritates the respiratory system and mucous membranes. It is fatal in amounts of 1,000 ppm or more. Prolonged exposures at lower, non-fatal levels weaken the lungs.

Fluorine: a poisonous, pale, yellow-green gas that is the most chemically reactive of all the elements. It is highly dangerous in its pure form and can cause severe burns if it comes into contact with the skin.

Hydrogen: a colorless, highly flammable, gaseous element. It is used in the production of synthetic ammonia and methanol, in petroleum refining, in the hydrogenation of organic materials, as a reducing atmosphere, in oxyhydrogen torches, and in rocket fuels. Ordinary hydrogen gas is made of diatomic molecules (H2) that react with oxygen to form water (H2O) and hydrogen peroxide (H2O2), usually as a result of combustion.

Nitrogen: a nonmetallic element that constitutes nearly four-fifths of the air by volume. It occurs as a colorless, odorless, almost inert, diatomic gas (N2) in various minerals. Nitrogen is found in all proteins and is used in a wide variety of important manufactures, including ammonia, nitric acid, TNT, and fertilizers. Atomic number 7; atomic weight 14.0067; melting point -209.86°C; boiling point -195.8°C; valence 3, 5.

Oxygen: a key component for combustion and a strong oxidizing agent with high electronegativity.