As defined here, industrial gases encompass a large number of products that are gaseous at room temperature and pressure, and while they may actually be stored as a liquid or solid, they are commonly used in gaseous form.  From a more scientific perspective, a gas is a state of matter without a prescribed shape or volume. Gases have unique 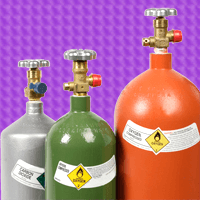 properties and characteristics depending upon such variables as the temperature, pressure, and volume to which they are subjected.  Gases have low densities, assume the volume of their containment (or dissipate to the atmosphere), mix well with other gases, and are more compressible than solids and liquids.

Industrial gases are comprised of elements, molecular compounds, or mixtures. The most common industrial gases are oxygen, hydrogen, nitrogen, carbon dioxide, and noble gases such as argon, neon, xenon, and krypton. Some industrial gases such as nitrogen, oxygen, argon, LNG, and liquefied petroleum gas are liquefied at high pressure for ease of storage and transport.  At even lower temperatures these liquids can turn to a solid.  Dry ice, a solid form of carbon dioxide, is a common example of a normally gaseous material (at ambient conditions) that has useful properties as a solid.  Much of the carbon dioxide will sublimate; meaning it will move directly to the gaseous phase from the solid phase without becoming a liquid.  Finally, some industrial gases, such as hydrogen, are highly volatile and need special handling and storage to ensure safe usage.

Industrial gas suppliers typically provide the gas as well as the storage and processing equipment necessary to facilitate transportation and proper usage.  Industrial gas equipment may include storage tanks and distribution systems, vaporizers and pressure vessels (dewars, cylinders, and tanks), and cryogenic trailers. Each of these items typically includes a means of controlling pressure and flow.

Because gases must be contained and readily available at point of use, the means of delivery is critically important to ensure system compatibility and safe transportation.  A variety of storage containers include: bulk containers, cryogenic cylinders (Dewars), gas cylinders, and glass bottles (ampules).  Additionally, there are more application-specific containers, including permeation tubes and safe delivery systems.  Although not covered here, (see Gas Generation Equipment), gases may be produced in an on-site generation system.

Bulk gases can be supplies by several methods: stationary cylinders, horizontally-mounted tube trailers, or pipelines.  The stationary cylinder must be refilled periodically from a gas line or cryogenic tank trailer.  Cryogenic tank trailers can deliver liquid gas in bulk form. Pipeline delivery is only available in areas near a gas production plant.

A gas cylinder or tank is a pressure vessel used to store gases at high pressure. 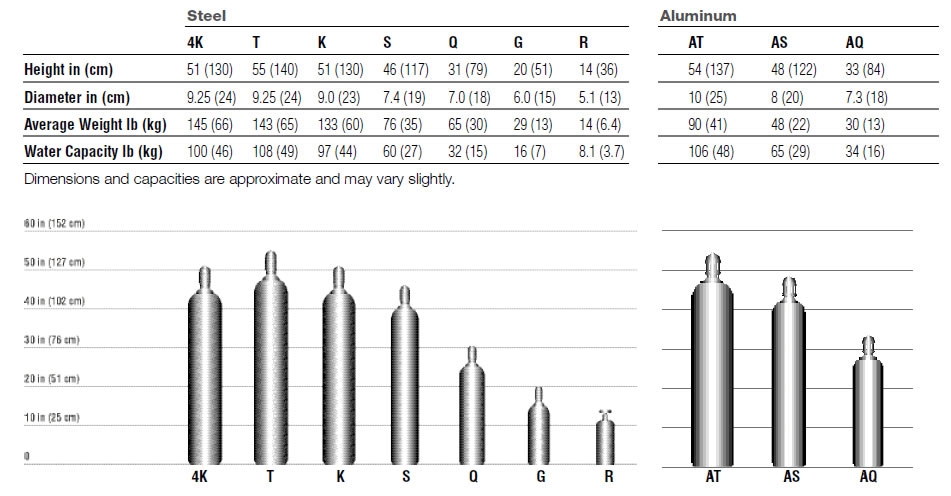 An insulated container used especially to store liquefied gases; having a double wall with a vacuum between the walls and silvered surfaces facing the vacuum.

Glass bottles or sealed ampules are used for small quantities of gases for R&D, analytical standards, or specialty applications.

These systems produce a gas where it will be used.  For example, there are complete systems to concentrate oxygen and nitrogen from air that are built within industrial facilities, thereby eliminating transportation costs. 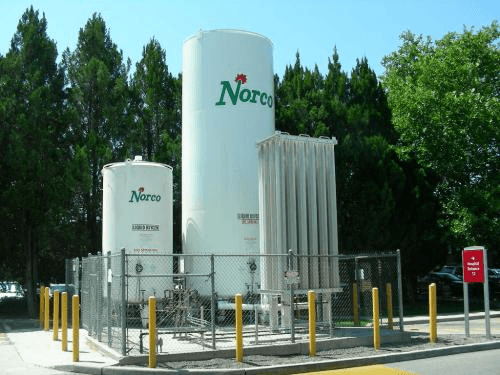 Permeation tubes are small, inert capsules containing a pure chemical molecule. At constant temperature, the device emits the molecule through the permeable tube wall at a constant rate. 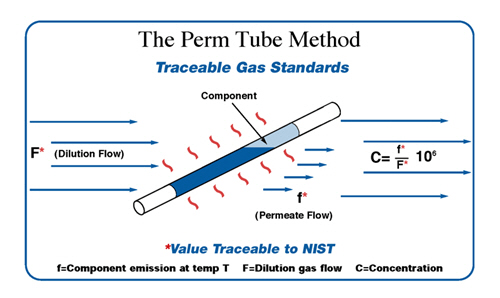 In all cases, safe and proper handling of the stored gases is essential.

As mentioned earlier, gases are compressible and, as such, knowledge of the pressure generated by a gas as it relates to temperature and volume are critical to any application from both a performance and safety perspective. 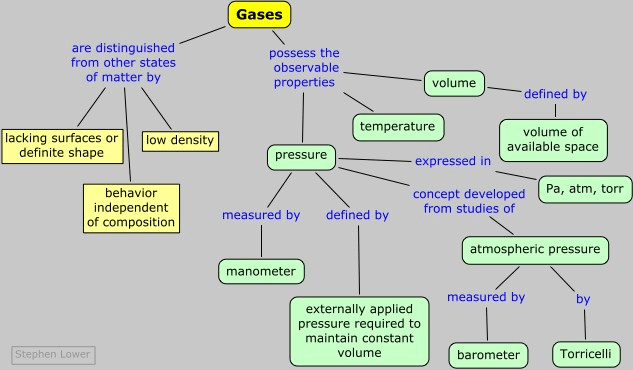 From a performance perspective, knowledge of the boiling point and freezing point may be relevant, but the auto-ignition temperature, the minimum temperature required to ignite a gas or vapor in air without a spark or flame present, is of paramount importance.

Other properties that are relevant to particular applications include:

One important way to look at compressed gases, because of how they are used, is their capacity as oxidizing agents, flammable gases, and inert gases.

Flammable gases, together with air or oxygen in the right concentration, burn or explode if ignited.  If the mixture is too lean or too rich, the mixture will not ignite.  Some flammable gases include:

Inert gases do not take part in combustion processes and they do not react with other materials. An inert gas supplied to a room or limited space will reduce the amount of oxygen and limit a combustion process of a fire. Examples include:

Application and Use of Gases

Industrial gases are used in a myriad of applications that are dependent upon the many unique properties of specific gases.  For example, industrial gases are commonly used in manufacturing, especially in cutting and welding applications.  Acetylene gas is a highly flammable gas used in such applications as the production of organic compounds such as neoprene and rubber. It may also be pressurized to produce benzene. Oxygen acetylene torches mix oxygen and acetylene gas in controlled amounts to produce an extremely hot flame. Oxy acetylene welding is used to cut steel or weld iron, and can produce a flame as hot as 6300° Fahrenheit. Other cutting devices include carbon dioxide lasers. CO2 laser cutting uses a laser beam focused with a lens to cut materials and is typically used for precision applications such as laser surgery. Rare industrial gases such as argon are also commonly used in laser applications.

Hydrogen (H) - a colorless, highly flammable, gaseous element.  It is used in the production of synthetic ammonia and methanol, in petroleum refining, in the hydrogenation of organic materials, as a reducing atmosphere, in oxyhydrogen torches, and in rocket fuels. Ordinary hydrogen gas is made of diatomic molecules (H2) that react with oxygen to form water (H2O) and hydrogen peroxide (H2O2), usually as a result of combustion.

Nitrogen - a nonmetallic element that constitutes nearly four-fifths of the air by volume. It occurs as a colorless, odorless, almost inert, diatomic gas (N2), in various minerals. Nitrogen is found in all proteins and used in a wide variety of important manufactures, including ammonia, nitric acid, TNT, and fertilizers. Atomic number 7; atomic weight 14.0067; melting point -209.86°C; boiling point -195.8°C; valence 3, 5.