Welding gases and thermal process gases also include shielding gases that are used to protect the weld area from atmospheric gases such as oxygen, nitrogen, carbon dioxide, and water vapor. A shielding gas is often a semi-inert or inert gas. Argon is the most cost-effective shielding gas and other gases include helium and carbon dioxide. Binary, ternary, and even some quaternary mixtures with oxygen are also used and are specified based upon the type of welding, alloy composition, and material parameters such as thickness. Shielding gases are used in indoor gas arc welding applications to limit the possible dispersion of the welding gas by atmospheric conditions.

Shielding gases are used in arc welding where a power supply creates an electric arc between an electrode and the metal stock to be welded. In gas metal arc welding (GMAW), also known as MIG welding, shielding gases are used to stabilize the arc on the metal that is being welded and shield the arc and the molten metal from atmospheric gases. MIG welding was originally developed to weld non-ferrous metals such as aluminum, but is now commonly used to weld steel. Gas tungsten arc welding (GTAW, also known as TIG welding) also requires a shielding gas such as an argon/helium mixture or an argon/hydrogen mixture. TIG welding is used on thin metals because it produces a steady arc and high quality welds.

The most common gas welding process is oxy-fuel welding. Also known as oxyacetylene welding, it is a highly versatile welding process but in recent years it has become less popular in industrial applications. It is still widely used for welding pipes, tubes, and repair work.

The equipment is relatively inexpensive and simple. The process involves the combustion of acetylene in oxygen to produce a welding flame temperature of about 3100 °C. The flame, since it is less concentrated than an electric arc, causes slower weld cooling, which can lead to greater residual stresses and weld distortion. A similar process, oxyfuel cutting, is used for cutting metals. 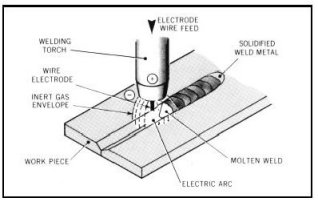 The shielding gases protect the welding area from atmospheric gases such as nitrogen and oxygen, which can cause fusion defects, porosity, and weld metal embrittlement if they come in contact with the electrode, the arc, or the welding metal. This problem is common to all arc welding processes; for example, in the older shielded metal arc welding process (SMAW), the electrode is coated with a solid flux which evolves a protective cloud of carbon dioxide when melted by the arc. In GMAW, however, the electrode wire does not have a flux coating, and a separate shielding gas is employed to protect the weld. The shielding gas eliminates slag, the hard residue from the flux that builds up after welding which must be chipped off to reveal the completed weld.

In addition to atmospheric protection, the shielding gas serves additional purposes, including:

The choice of shielding gas depends on several factors. The type of material being welded and the process variation are the most important considerations, as follows: 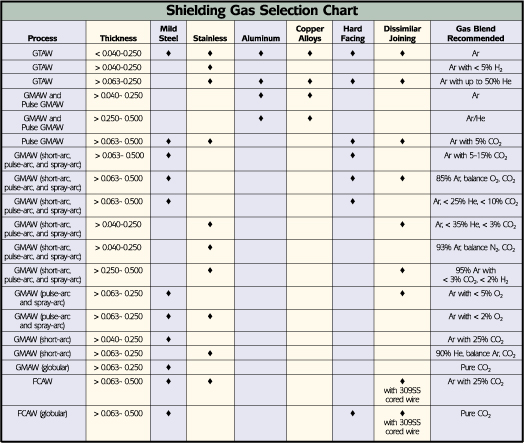