Fusible alloys are metal alloys that melt at low temperatures, usually below 300º F or 150° C. Many fusible alloys have eutectic compositions and are often bismuth-based in combination with lead, tin, antimony, gallium, cadmium, zinc, and indium alloying constituents. Some fusible alloys are gallium-based or indium-based. Fusible alloys are essentially stable and inert—especially when compared to metallic elements on the other side or periodic table (e.g. K, Na, Li). While alkali (Li, Na, K, Rb, Cs) and alkali earth (Mg, Ca, Sr, Ba) metals also have low melting points, alloys of these metals are usually excluded from the group of fusible alloys because of their unstable nature and reactivity. Low melting point alloys are usually available in the form of solid bars, ingots, powder, solid ribbon, wire and special forms.

The very low melting point of fusible alloys makes them easy to melt or to cast. Some fusible alloys will melt in the palm of the hand or remain liquid below room temperature, such as mercury. These compounds can also be engineered to produce the desired melting temperature range or melting point for specific technology applications. Most fusible alloys feature low vapor pressure, good thermal conductivity, high liquid fluidity, the ability to be easily reused by re-melting, and controlled thermal dimensional properties. Some of the metals used to compose fusible alloys are metalloids or p-block metals in groups 13 through 15 or 16. The metals exhibit properties such as tendency toward directional bonding, formation of covalent compounds, amphoteric oxide formation, low coordination numbers, semiconducting, or ability to form compound semiconductors.

Fusible alloys typically are based on some of the post-transition metals or elements such as gallium (Ga), indium (In), tin (Sn), and bismuth (Bi). Zinc (Zn), antimony (Sb), thallium (Tl), lead (Pb), mercury (Hg), tellurium (Te) and cadmium (Cd) are sometimes included in the list of fusible alloy constituents. However, the melting points, toxicity, reactivity, or brittleness of some of these elements may restrict their use to only alloying additives or secondary constituents.

Gallium-based fusible alloys – Gallium based fusible alloys have compositions where 50% or the major constituent element is gallium. Gallium even in its unalloyed form has a very low melting point, which allows the pure metal to melt in your hand. Gallium can be alloyed to reduce its melting point. Gallinstan® is a patented an alloy that contains gallium, indium, and tin, and melts at -4° F (20° C). Gallium alloys easily wet both glass and ceramic materials, which facilities soldering and allows mirror surfaces to be produced. Gallium crystals also produce a “cry” like tin when a solid bar or the pure metal is bent.

Tin-based fusible alloys – Tin based fusible alloys have compositions where 50% or the major constituent element is tin. Pewter is a well-known tin alloy that has be used for centuries. Tin is a malleable and moderately ductile metal. When a bar of pure tin is bent, the crystals break, producing a characteristic “tin cry”, which is the result of metal tin crystals twinning or shearing.

Fusible alloying additives – Antimony, tin, lead, silver, bismuth and cadmium elemental metals are commonly-used constituents or additives during alloy formation. Cadmium and lead are considered restricted or hazardous materials, which limits their use in some applications.

Eutectic fusible Alloys - Many fusible alloys have eutectic compositions, which provide an alloy with a distinct melting point similar to a pure metal. In eutectic alloys, the liquidus temperature is equal to the solidus temperature.

Melting Point or Range - For pure metals and eutectic alloys, the melting point is an important specification because in some applications the alloy must allow a mechanism or pressure to be released or triggered at a specific temperature (e.g. turkey timers, boiler relief plugs). Non-eutectic alloys melt or solidify over temperature range between the solidus and liquidus temperatures. During solidification, non-eutectic alloys change from a liquid, to slushy solid-liquid mix and then to a solid state. 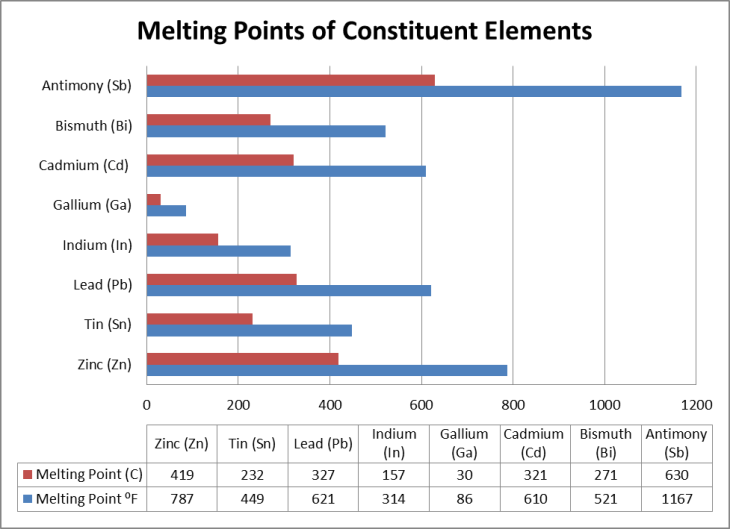 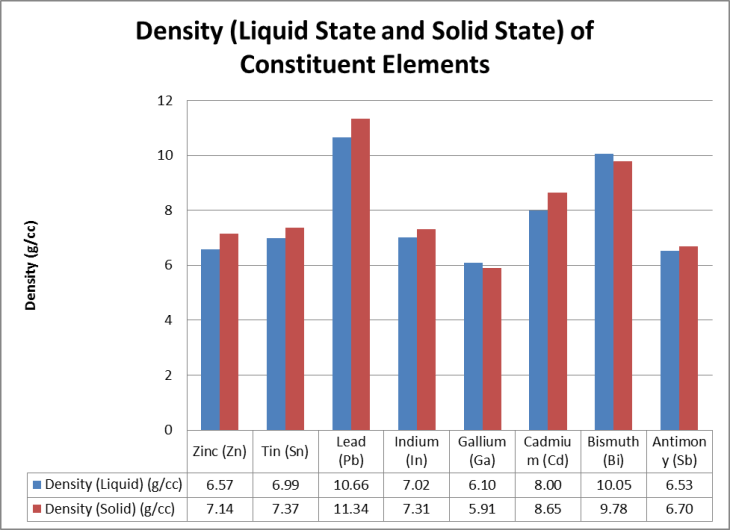 The following specifications can be important if the fusible alloy is ued as a component in a design or as tooling during a manufacturing process.

Strength (UTS, Break)—Ultimate tensile strength (UTS) at break is the maximum amount of stress required to fail or break the material under tension-loading test conditions.

Yield Strength (YS)—Yield strength (YS) is the maximum amount of stress required to deform or impart permanent plastic deformation (typically of 0.2%) in the material under tension-loading test conditions. The yield point occurs when elastic or linear stress-strain behavior changes to plastic or non-linear behavior. Ductile materials typically deviate from Hooke's law or linear behavior at some higher stress level.

Elongation (%)—Elongation is the percent amount of deformation that occurs during a tensile test or other mechanical test. The % elongation provides an indication of the ductility of the fusible alloy. Low elongation indicates a brittle material.

Some common fusible alloy applications are described below.

Bending aids—Use of fusible alloys in tube bending can prevent thin wall tube from buckling on sharp bending radii.  During the tube bending process, the solid fusible alloy in the tube acts like an internal mandrel allowing smaller radii of tubing to be formed without collapse or pinching of the tube.

Bonding and sealing—Fusible alloys are used in sealing and bonding of sensitive electronic devices, glass, ceramic and temperature-sensitive materials such as molded interconnect device (MID) plastics. Fusible alloys have been used to lock or seal adjustable set screws.

Casting and molding—Fusible alloy molds are used for resin casting and potting or encapsulation of electronic or electrical devices. These molds provide a greater degree of flexibility than steel or aluminum molds and eliminate the expense of machining expensive metals.

Dental/medical—Fusible alloys have been used in the development of dental models and prosthetic devices. Fusible alloys also provide shielding and a radiopaque contrast medium during radiation therapy or x-ray diagnostics of patients.

Electroforming—Expendable electroforming mandrels for complicated shapes can be formed, where a metal is plated or electrodeposited onto the fusible alloy mandrel and then melted out leaving the complex electroformed part behind.

Electrical switches and sensors—Very-low-temperature-melting fusible alloys are used as replacements for mercury in switches or tilt switches.  Fusible alloy compositions can be engineered to produce environmentally benign mercury replacements or “liquid metal alloys,” which are molten at or below room temperature.

Proof casting/inspection—Fusible alloys are also used to replicate or proof geometries or surfaces of components by casting a layer of the fusible alloy onto a part.

Safety devices / fire protection—Fusible alloy components are critical elements in fire sprinklers, steam boiler relief plugs, thermal use parts and thermostats because of fusible alloys’ ability to melt away at a specific low temperature or temperature range thereby opening up a cavity or releasing a mechanism.

Thermal management / heat transfer—Fusible alloys can be used as thermal interface materials to remove heat from an electronic component for dissipation through a heat sink. Indium- and tin-based fusible alloys wet ceramics and plastics and may provide a more thermally conductive interface when dissipating heat.

How to Use Fusible Alloys 97577 R3 - Indium Corporation

Wierzbicki, L., “Strength properties of the low-meltingpoint alloys”, Journal of Achievements in Materials and Manufacturing Engineering, 01.11.2014.