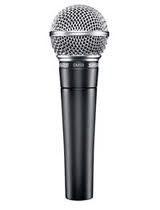 Audio microphones are designed for sound reception, sound reinforcement and recording applications that involve speech and music.  They are responsive to voice frequencies and designed to reduce background noise. Products for industrial environments such as factories and warehouses may be sealed against dirt, dust and corrosive vapors.

The IHS Engineering360 SpecSearch database provides information about these and other types of audio microphones.

When selecting products, buyers can search for audio microphones by directional sensitivity.

Audio microphones also vary in terms of the signal-to-noise ratio (SNR), impedance, and polarization. Some have prepolarized electret backplates or use external capacitor polarization, which requires a separate power supply.

Products that are designed for extreme conditions may be outdoor-rated or have a wind or turbulence screen. Integral pre-amplifiers boost the output from small to intermediate levels. With regard to applications, audio microphones are used in aircraft, cars, and trucks; with computers or industrial workstations; and to provide information to listeners over loudspeakers. Recording studios, professional sound reinforcement, television or radio broadcast equipment require professional-grade audio products.