Opacity sensors and instruments measure the amount of light transmitted through a sample.

Opacity is formally defined as the measure of the impenetrability of electromagnetic radiation through a sample. The opacity instruments described in this guide are primarily used to analyze air and smoke; these media types can be informally described as "clear" or "dirty" depending on their opacity.

Opacity measurement largely depends on the concentration of particles within a sample. When electromagnetic radiation—in this case visible light or infrared radiation—is emitted toward a sample, suspended solids will scatter, reflect, and absorb the radiation, preventing it from passing through. Opacity sensors measure the quantity of transmitted light and convert it to a relevant value.

Particles within a sample typically absorb or scatter emitted radiation. In general, particles which are smaller than the wavelength of emitted radiation absorb it, while particles larger than the wavelength scatter it. The latter scenario is preferable for opacity measurement. Because particles within industrial emissions are usually between 0.1 and 50 microns in size, opacity sensors typically use short wavelengths of between 0.38 and 0.75 μm.

A relatively simple formula for light transmittance is listed below.

According to the Beer-Lambert law, transmittance can also be calculated as:

e=base of the natural logarithm

n=number of particles per unit volume

It is important to note that naq is the turbidity attenuation coefficient of the sample, which may be found in reference texts or standards.

Opacity (O) as a percentage can then be found by subtracting transmittance from 100%:

Optical density, sometimes called extinction (D), is a useful parameter which can be calculated from opacity measurements:

It is important to note that opacity instruments attempt to replicate and quantify the observation of a sample by the human eye. Because the human eye is photopic and its peak sensitivity is around 0.55 μm, light sources in opacity instruments must also have photopic distributions. Incandescent sources, for example, have peak sensitivities around 1.0 μm and result in errors due to absorbed water and poor submicron particle detection.

Most sensors emit within the infrared range, as the absorption wavelengths of most common contaminant particles—including CO, CO2, and hydrocarbons—lie within this range.

The graph below shows transmission characteristics for various airborne particles, including their corresponding infrared absorption. By collating this data with opacity measurements taken at different wavelengths, approximate particle concentrations can be determined. Characteristics of hydrocarbons (CH4) and carbon dioxide (CO2) particles are of special interest for smoke opacity monitoring. 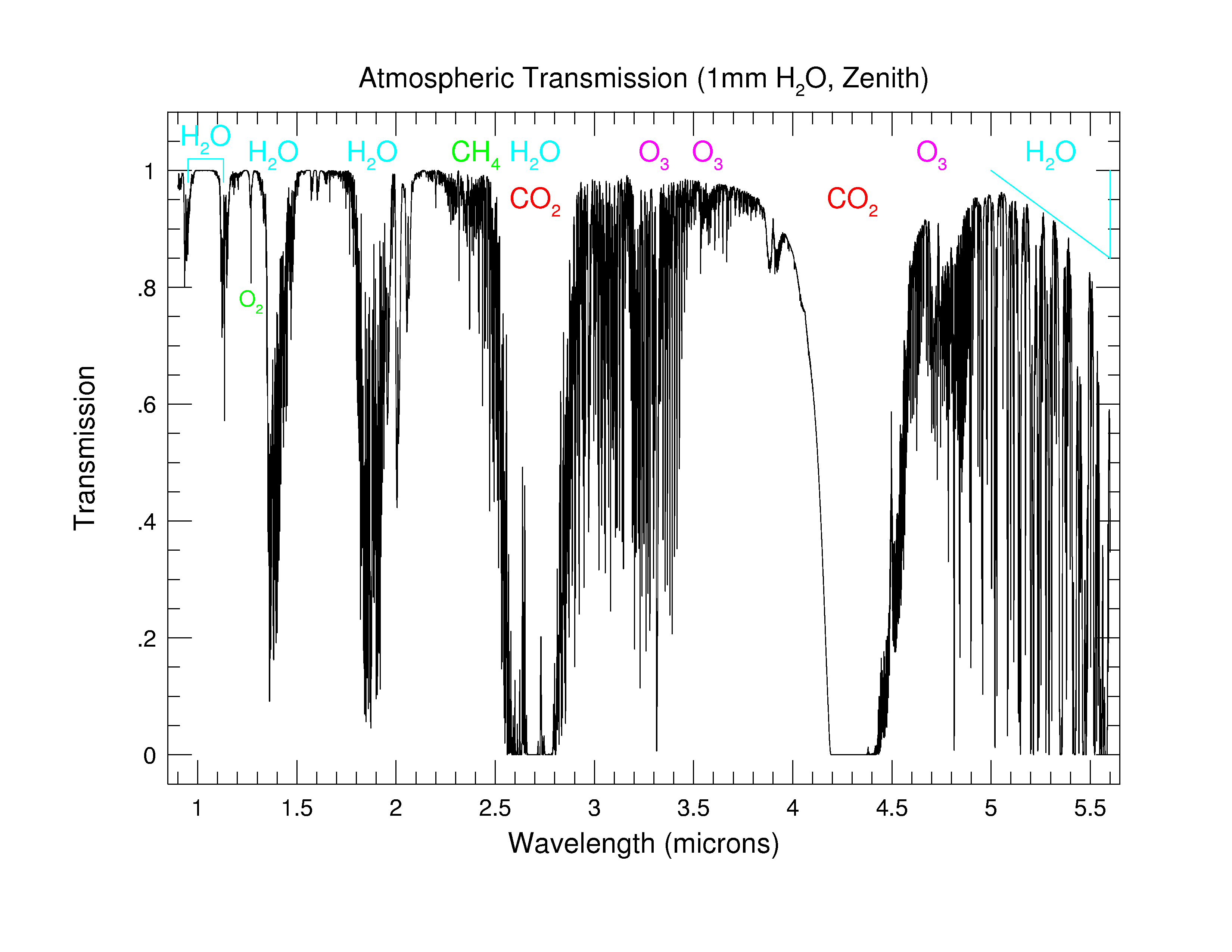 The most common use for opacity instruments is the measurement of gaseous emissions. Most governing bodies set limits on the opacity of emissions, as shown in the image below. Opacity instruments, therefore, are attached to exhaust stacks on vehicles, industrial buildings, and other sources to monitor emissions.

Opacity sensors can be used in the same manner to monitor equipment conditions. Analysis of an engine's fuel combustion through opacity monitoring is an excellent method for determining the need for maintenance or tuning.

Three emission types (from left): 20%, 40%, and 80% opacity. The stack at far left is the only one operating within the local prescribed limits, while the one at far right is considered an egregiously dirty emission.

A less-common use for opacity sensors is the measurement of ambient air. This opacity value can be used by climatologists to calculate horizontal visibility.

The design, use, and testing of opacity instruments is governed by certain published standards and specifications. Examples of major standards include:

Opacity sensors used for stack monitoring are online devices which are affixed to the process stream; these are commonly known as transmissometers. They typically consist of a transmitter, which directs emitted radiation through the stream, and a receiver which measures the transmitted radiation. Both components require attachment to a control unit, which initiates emission from the transmitter and outputs data from the receiver. This output may take the form of various calculated values, including percent opacity, percent transmittance, optical density, or dust density.

The images below illustrate two differing opacity sensor arrangements. The image at left shows a transmitter and receiver provided with a pipe section which can be incorporated into an exhaust stack. The image at right shows a similar setup attached to the end of a stack so that no additional pipe section is necessary. 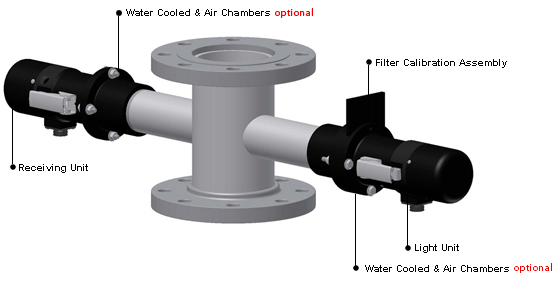 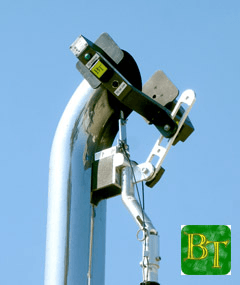 Most meters are calibrated to display either percent opacity or optical density values. More specialized devices can output related values such as dust loading.

Opacity instruments typically feature some type of data-logging capability built into the control unit. Short-term data storage is useful for process control, while long-term data can be collated for emissions reporting. Many control units/meters also contain an integral alarm which is triggered when an unacceptable number of high measurements is reached.

Transmissometers may be designed as single- or double-pass instruments. Single-pass instruments transmit radiation through a process stream once and consist of a single transmitter and a single receiver on opposite sides of the stack. While these devices are simple and economical to use, they are difficult to calibrate without the use of a second light source specifically designed for calibration.

Double-pass transmissometers are designed with the transmitter and receiver on the same side of the stack. Emissions from the light source are transmitted back to the receiver using an auto-collimating reflector, effectively doubling the transmissometer's light path and doubling its sensitivity. Double-pass devices eliminate some of the calibration problems inherent in single-pass instruments and provide simpler means for detecting contamination on the window of the transceiver. 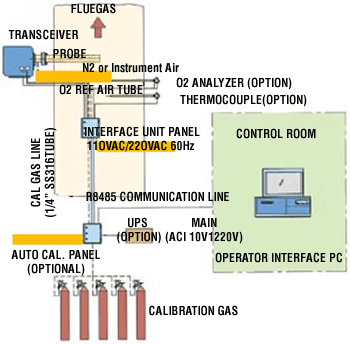 A double-pass transmissometer system. All of the components described above are found in the transceiver and probe.

While online sensors and meters are most common, offline devices are also manufactured for specialty applications.

For example, smokeless flame stacks typically require the injection of steam to complete combustion and control the amount of smoke produced. Infrared opacity sensors can be used to assist in the automation of the steam release. In this arrangement, a sensor is placed some length (up to 1000 meters) from the flame and is carefully calibrated to emit infrared radiation directly at the flame. The output from the opacity sensor can be used to differentiate dirty, smoky flames, which reduce transmission, with clean-burning ones, which tend to transmit more radiation. If the system determines that a portion of the flame is dirty, more steam is released to eliminate smoky output. 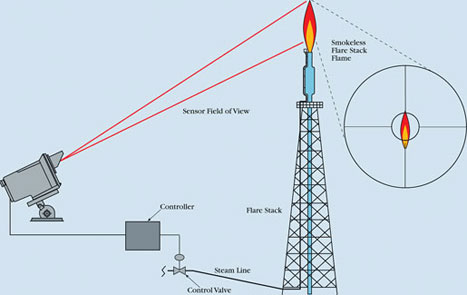