Without context, the term "radiation" sometimes refers to any type of radiated energy, including radio waves, microwaves, and visible light. It more commonly describes ionizing radiation, which ionizes contacted atoms by liberating electrons. Radiation detectors are used to sense and monitor this latter type.

Ionizing radiation is released by both natural and artificial sources, including:

Humans are exposed to ionizing radiation—about 80% of which is natural—on a regular basis. Common sources are shown in the chart below.

Sources of radiation exposure in the United States.

High doses of ionizing radiation are inherently harmful to living things. Acute or prolonged exposure to radiation causes multiple types of cancer in humans. Because radiation cannot be naturally sensed by humans, radiation detectors are essential for monitoring radiation emissions from industrial, medical, and nuclear power facilities to ensure that emissions meet certain guidelines and regulations.

Penetration characteristics of the radiation types listed below.

Alpha particles can be considered to be helium-4 atoms without electrons. They are positively charged, as they have two protons and two neutrons. Compared with other radiation particles, alpha types are heavy and incapable of travelling more than a few centimeters. Radium, radon, and uranium are alpha emitters.

Because of their high energy states, alpha particles very quickly give up their energy to any nearby particle, leading them to rapidly reach equilibrium and disappear within a medium. Most alpha particles are therefore incapable of penetrating thin layers of water, dust, air, or paper, and cannot enter human skin. Due in part to their rapid dissipation, these particles are the most difficult to measure.

Many dedicated alpha detectors overcome the very low penetration of particles by covering the detection medium with an extremely thin, delicate film. While this renders the device exceptionally fragile, it does compensate for alpha particle difficulties.

Beta particles are simply electrons emitted from the nuclei of decaying radioactive isotopes, and as such they are negatively charged. Beta radiation is lighter than alpha and is capable of travelling several feet from a source. Beta particles can penetrate thin materials, including paper and the outer layers of human skin, but typically cannot penetrate clothing. Strontium-90, carbon-14, and tritium are beta emitters.

Beta-active sources sometimes emit particles with very low energies. As such, these particles have less penetrative power than alpha particles and are exceedingly difficult to detect.

Gamma and x-radiation is emitted in the form of electromagnetic radiation with very short wavelengths (<10 picometers and <10 nm, respectively). These two types have much more penetrative power than emitted particles and can only be effectively blocked by thick lead or concrete barriers. Gamma and x-radiation can travel up to 500 meters from a source, and may be emitted in conjunction with alpha or beta particles.

Gamma and x-rays are the easiest radiation types to detect due to their penetrative properties.

The electromagnetic spectrum, showing the short wavelengths/high frequencies of x- and gamma radiation.

Neutron radiation, as the name implies, involves the emission of neutrons from decaying atoms. Neutron radiation is the only type capable of making contacted atoms radioactive. Neutrons are highly penetrative and can travel long distances, requiring thick, hydrogen-rich barriers comprised of water, concrete, or oil to be blocked.

Because neutrons do not cause ionization in the same way that other particles do, they typically require fairly specialized versions of common detection equipment.

Some common detector types are described below.

G-M tubes are argon-filled tubes fitted with a thin wire element. When a particle enters the tube, it pulls an electron from an argon atom. The electron is attracted to the electrified element and causes electrons from other argon atoms to become dislodged along the way. When all the electrons arrive at the wire, a pulse forms which can be transmitted to a counter.

G-M tubes can be configured to detect alpha, beta, or gamma radiation. Due to the high ionization potential of alpha particles, G-M tubes are effective as alpha detectors. They also have high sensitivity characteristics due to the electron "avalanche" which occurs after sensing even a single particle.

A Geiger-Müller tube with counter.

Scintillation detectors are also known as sodium iodide detectors. They consist of a salt crystal (most often sodium iodide), also known as a "scintillator", attached to a photomultiplier tube. When a radiation particle strikes the crystal, it causes excitation and the release of photons, resulting in a tiny flash of visible light. The flash is reflected through a lens and makes contact with a photocathode, a specialized device which produces electrons when contacted by light. The electrons are pulled through a photomultiplier and are collected by an anode to form an electromagnetic pulse; this pulse is detected and displayed by a meter.

Scintillation detectors represent the best means for detecting gamma or x-radiation and are the second-most common detector type after G-M tubes. They have the ability to distinguish between alpha, beta, and gamma radiation, and can be configured to produce correspondingly different sounds through a meter. Beta detectors often use a liquid scintillation medium and can achieve reasonably high efficiencies even at lower-energy emission levels.

Solid state detectors are modern semiconductor instruments which use a reverse-bias p-n junction diode. As a particle passes through the junction, the resultant excitation of electrons causes the formation of holes in the valence band. The electrons are then attracted to the n material, while the holes move toward the p material. This creates a current pulse which can be measured using a meter or counter. 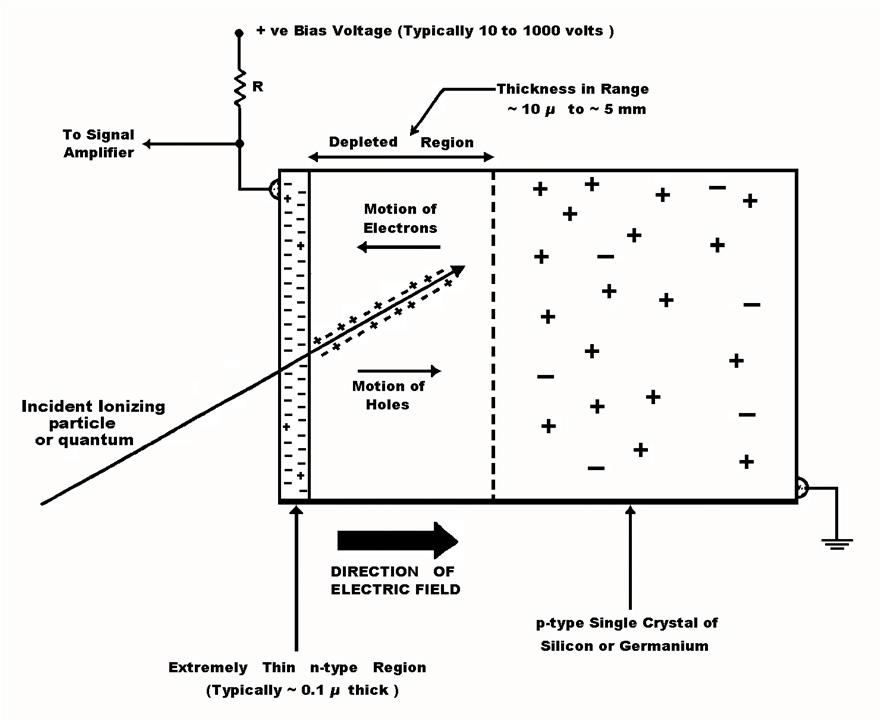 Semiconductor detectors essentially operate in a similar manner to G-M tubes, except that the electrons and ions used as charge carriers in a gas detector are replaced by electrons and holes. They are superior to both gas and scintillation types in nearly every application.

Radiation detectors may be fixed or portable. Fixed detectors are typically used in laboratories and other testing facilities and are designed to sit on a tabletop or attach to a process stream. Portable detectors are designed as handheld devices for field measurements. Both form factor types may use any of the detection methods described above. Other standards include IEEE 309, which is specific to Geiger-Müller tubes, and ASTM D7283 for liquid scintillation counters.