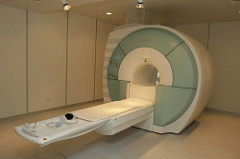 MRI machines operate based on nuclear magnetic resonance. A strong magnet is used to produce an electromagnetic field focused on the subject's area of interest aligning the nuclei and protons of water molecules with the direction of the field. Radio frequency (RF) pulses specific to hydrogen are then applied causing unmatched protons to spin in a different direction. As the RF pulses cease the hydrogen ions return to their native states, releasing the energy absorbed from the RF pulses. The receiver coil in the MRI detects these low energy releases and uses Fourier transforms to convert the signal into a picture that can be interpreted by a technician.

MRI exams are used for medical diagnosis of an array of ailments. Board certified radiologists interpret MRI images in order to diagnose problems related to tumors, internal bleeding, blood vessel diseases, infection, or bone and joint injuries. They may also provide more information about a problem initially found on an X-ray, ultrasound scan, or CT scan. Contrast materials, such as dyes, may be ingested or injected to show abnormal tissue more clearly.

MRI scans are a painless radiology technique. There is no radiation exposure as in x-rays although there are two ailments that can cause complications. It is important for a patient to discuss any prior procedures or injuries with a physician prior to having an MRI.

SAE R268 -- The use of x-rays, CT scans, and MRI scans to study crash-related injury mechanisms