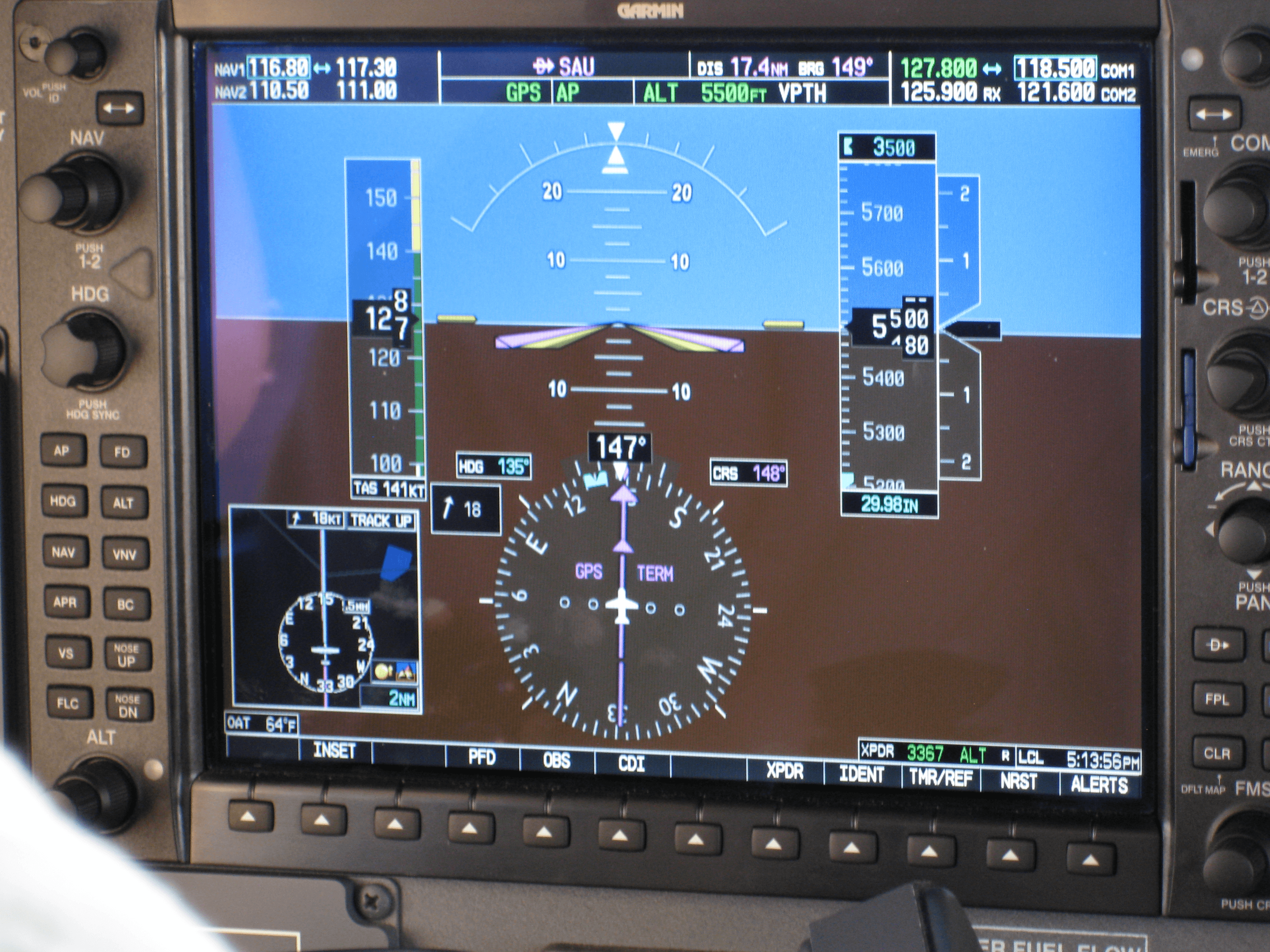 Flight displays are specialized user interfaces that present aircraft flight data—airspeed, altitude, heading, etc.—to a pilot. They may also provide pertinent information such as weather radar, navigation route, and collision avoidance data. Flight displays may be electromechanical or completely digital and were originally designed to replace and improve upon analog gages. The large digital screens of flight displays gave rise to the term “glass cockpit.”

Flight displays are integral parts of electronic flight instrument systems (EFIS) and may be produced as primary flight displays (PFDs) or multi-function displays (MFDs). PFDs are large, multifaceted displays that provide information on many different parameters at once, while MFDs are smaller screens that can display flight information in numerous configurable ways. MFDs may be used in conjunction with PFDs on the same aircraft.

Primary flight displays show the most important flight characteristics including:

Multi-function displays are capable of rendering a wide range of pertinent information, including the aircraft’s navigation route on a moving map that can show terrain, topographical, and obstacle data along with a weather radar overlay. MFDs might also display warnings and indications from the aircraft’s ground proximity warning system (GPWS) and traffic collision avoidance system (TCAS). Engine status data, such as fuel flow, oil temperature and pressure, and fuel quantity, are also represented on some MFDs.

The user interface of a flight display usually consists of a number of keys and dials arrayed around the bezel of the device.  Pilots can change settings, input parameters, and choose what to display by interacting with these controls.

Flight displays have a wide range of standard or optional features. Some flight displays support both legacy analog/synchro and modern digital signal formats to interface to a variety of mission systems, sensors, and radios. Other features include night vision compatibility, upgradeable software to introduce new features or fixes, the ability to interface with an autopilot, sensor redundancy, and controls located on the display bezel or externally mounted.

Flight displays benefit the pilot in a number of ways. They combine a wide range of information in one compact area, eliminating the need to scan across a large panel of instruments to find the data required.  This improves situational awareness and pilot efficiency.

Solid state sensors that feed data to the flight displays can have excellent reliability, in addition to optional redundancy from traditional sensor inputs.

The amount of information presented by flight displays can be overwhelming at first glance. Not all flight displays adhere to a standard user interface, so pilots need to learn the specific layout and interface of each new flight display model they encounter before operating the aircraft.

If a flight display fails, the pilot loses a concentrated source of critical information and must scan across various backup instruments across the flight panel, which might lack some secondary information such as stall angles and v-speeds.