A carburetor is a mechanical device that forms part of the ancillary superstructure of an internal combustion engine. The specific function of the carburetor provides fuel to the combustion chamber where an explosion occurs. Carburetors mix raw fuel with air to produce a more volatile and highly combustible blend of fuel. The downward stroke of an engine’s piston creates a natural vacuum, pulling the mixture from the carburetor into the cylinder walls. A separate process initiates a spark at the right moment and ignites the newly mixed fuel, causing it to ignite. The explosion forces the piston downward and produces power.

Technological advancements in automobile manufacturing and electronics led to the development of fuel injection. Fuel injection is the primary alternative to the carburetor in cars today. The function of a fuel injector system is based on the same principle as the carburetor. While fuel injection produces faster response and fuel efficiency, the carburetor still exists in classic cars as well as an extensive range of gas-powered machines and transportation alternatives.  These include airplanes, generators, tractors, lawn and garden equipment and motorcycles. 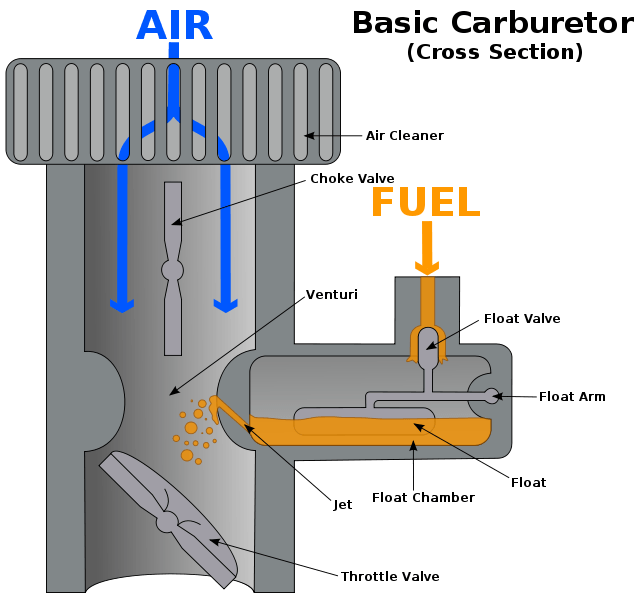 Luigi De Cristoforis is referenced as the original inventor of the carburetor in 1876. Enrico Bernardi produced the first working model of a carburetor while at the University of Padua in 1882.

During the early design and production of internal combustion engines, Karl Benz (Mercedes-Benz) was the first to introduce a commercial application of the carburetor. This trend continued until the late 1980s in the USA and early 1990s in Europe. Increasing regulation on vehicle emissions along with fuel efficiency and power gains led to fuel injection becoming the standard.

Carburetors are manufactured in several sizes and configurations. There are two types of carburetors:

The primary section of a carburetor is the venturi, a pipe-like construct with a narrow middle section. This narrow section causes the flowing air to increase rapidly. The bottom end of the venturi contains a simple valve, called a butterfly valve, which adjusts the airflow through the pipe. The butterfly valve works in conjunction with a separate valve named the throttle valve. The throttle valve controls fuel flow.

The combination of regulated airflow and fuel flow defines the volume and makeup of the resulting mixture produced by the carburetor. As the throttle is increased, the mixture is jetted in to the induction manifold and the cylinder itself, allowing combustion to take place.

When an engine is idling the pressure produced by the induction manifold is very low. Therefore, a different mechanical process takes place in order to keep the engine from stalling. A series of small metal tubes called fuel jets are in place to maintain a minimum flow of fuel. These jets disengage once the throttle valve opens, allowing the primary process to initiate.

A carburetor contains many parts working together to facilitate its core function. The main structure and largest component of the carburetor is the molded body made from a lightweight alloy or aluminum. The stationary body is under little stress and pressure, therefore, stronger metals are unnecessary.

The moving pieces of a carburetor are manufactured from steel or stainless steel. Several smaller parts, such as the fuel jets and screws that mount items or adjust settings, require metal that machines smoothly and accurately. These parts must also remain untarnished and deter debris buildup. Brass has the best properties for this requirement and is the metal of choice for fuel jets and tiny screws.

Each internal combustion engine is designed for a particular fuel intake system. Engines that operate with carburetors have a certain induction and intake manifold made to work with a discrete type of carburetor. Verify the size and type of carburetor the engine supports to ensure it physically fits and performs correctly.

Less complex manifold setups allow for substitution of similar products by different manufactures. Cars made between the 1940s and 1970s are the most popular models for aftermarket carburetors due to the simplicity and modular design of engines during that time. Installing an alternative carburetor may change the dynamics of all components working together harmoniously. Special consideration for fuel jet size and the throttle linkage is especially imperative. 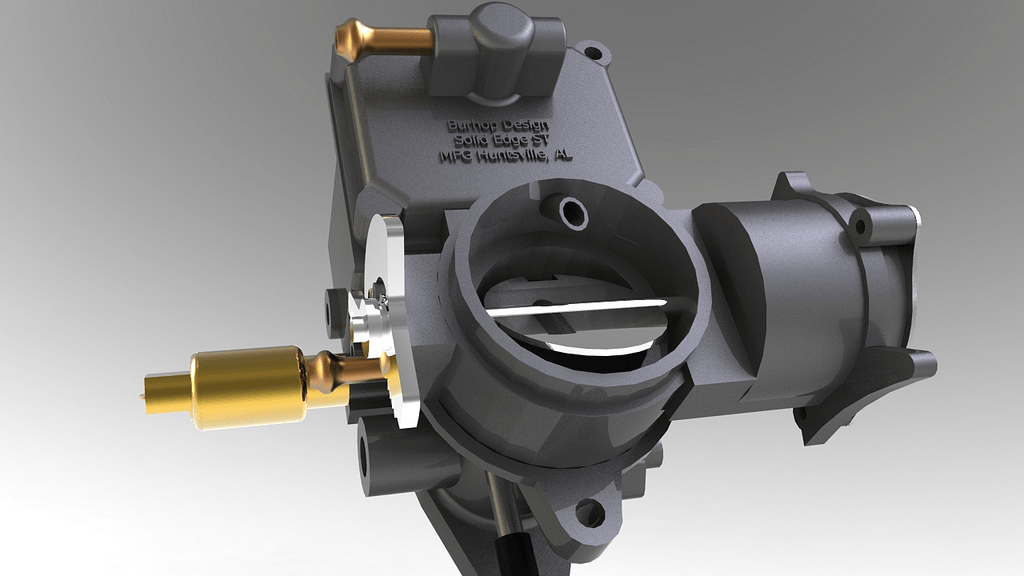 Fixed venturi and variable venturi carburetors have several options that change performance values while still complying with operational guidelines. The primary features include the following:

Power valve – A distinct spring-loaded valve that helps produce a richer mixture of fuel-to-air at higher volumes. The mixture results in preventing engine performance degradation such as pre-ignition of fuel at higher RPMs

An example of specialized features developed for engines operating under extreme conditions is an airplane’s carburetor heat control device. The device acts to counter the effects of freezing conditions experienced at high altitudes, keeping the venturi free of ice.

The fuel jet orifice size is a standard measurement referenced in all carburetors. Orifice size measures the opening of the jet in parts of an inch, for example, 0.58. The size of the jet’s opening directly relates to potential maximum fuel flow through the carburetor. In addition, induction and inlet manifolds must conform to standards that work with carburetor solutions. Details of carburetors must meet each manifold’s ranges of operation for proper operability.