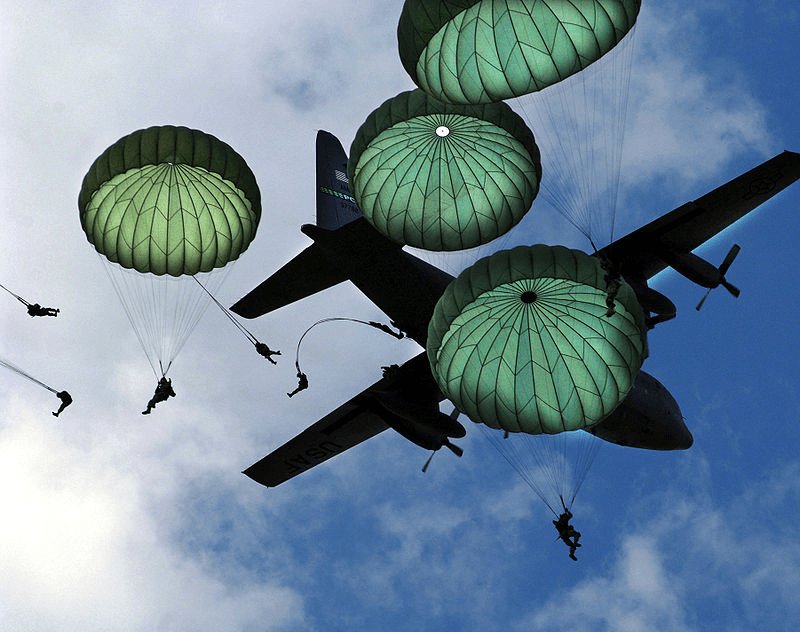 Parachutes are devices utilized to decelerate or stabilize objects, people, or vehicles in their travel through an atmosphere. They are most commonly constructed of high-strength fabric. These lightweight and low-volume instruments develop a large surface area and significant drag upon deployment.

The direction of travel of a parachute (colloquially called a 'chute) is largely dependent on the design of the parachute. Purely ballistic parachutes solely decelerate the payload's vertical velocity, and those with vents along one side of the canopy propel the chute with steerable, lateral motion. Parafoil-type canopies develop both lift and drag by using ram-air pressure to inflate a fabric-composed, cellular-structured, low-aspect-ratio wing; these varieties are capable of significant horizontal speed. Other chutes are dedicated to the deceleration of land or water craft.

Most commonly, objects or humans are discharged from an aircraft at an altitude high above the intended landing zone, with the purpose of delivering them safely to the ground. Occasionally, parachutes are used as emergency landing systems for lightweight aircraft as well. Typically, the payload is in free-fall under gravitational force but is buoyed by its own aerodynamic qualities. To slow the descent the parachute must be deployed, either manually, mechanically, or electronically. Manual deployment requires a human to pull a 'ripcord', which is a handle attached to a pin that releases a spring-loaded pilot chute. Mechanical deployment utilizes a static line which connects the pin to the aircraft, and once the line has reached its length it pulls the pin to release the pilot chute. Electronic deployment requires the use of an automatic activation device (AAD), which is set to deploy the pilot chute when preset time, dynamic pressure, or altitude parameters are met.

The pilot chute is sized to extract the deployment bag containing the chute and suspension lines. When the suspension lines are taut the pilot chute strips off the deployment bag and inflates the main canopy. Note that many cargo parachute systems are multistage. Some chutes deploy multiple sequential parachutes, while others participate in 'reefing', where the canopy mouth is temporarily restricted in size by a rope. These techniques are used to obtain the appropriate descent rate or to control the opening load to an acceptable level. The main parachute must unfold reliably and consistently without twisting the fabric or lines. If the parachute deploys too quickly it can damage the payload. Heat generated by friction may also damage a parachute system, and is typically a consequence of poor parachute packing.

A drogue parachute can be inserted into the airstream behind the aircraft from the cargo door. This extracts the payload from the aircraft's opened cargo hold and ensures the correct orientation of the payload during its descent. It may also extract a larger drogue chute in the case of very heavy cargo. Complex, multi-parachute systems have been devised for descent of military equipment and to recover components used on spacecraft, such as launch boosters and capsules.

Sometimes parachutes are attached to munitions to retard a bomb during its descent. This allows low-flying delivery aircraft to leave the vicinity before detonation. Parachutes are also used to deliver sonar equipment to sea locations.

Load-extraction parachutes must be highly stable upon deployment. Levels of canopy porosity determine the oscillation experienced by the payload. Stability is especially important for low-altitude-parachute extraction systems (LAPES). Examples of highly-stable parachutes include ribbon, ring-slot, and cruciform chutes.

Personnel that must eject from military aircraft face starkly different circumstances than those who jump from fuselage or cargo doors. In this instance, aircraft operators are located in a cockpit located in the front of the jet, and the crew only ejects from an inoperable vehicle. Significant gravitational forces, air resistance, and inertia prevent pilots from manually removing the cockpit hatch and jumping from the aircraft. Instead, the cockpit canopy and ejection seat are jettisoned above the plane by explosive charges or rockets. Crew members are strapped into the ejection seat, which contains the parachute assembly. Due to the excessive speeds of the crew, highly-stable parachutes are required.

Ballistic recovery parachutes are available for lightweight aircraft. These parachutes are typically deployed within seconds via solid-fuel rocket. The impaired aircraft's descent is slowed and passengers have an increased rate of survival.

High-speed land vehicles, aircraft, spacecraft and even some race boats utilize parachutes to aid deceleration. These parachutes are designed per application specifications and must be highly stable as any significant oscillation will compromise safety. In the case of vehicles and aircraft, the pilot or driver will deploy the chute which is strictly used for supplementary braking, as its effectiveness is defined by the inverse square of velocity.

A parafoil (or specifically, a ram-air parachute) resembles a low-aspect-ratio wing. It is constructed entirely of fabric, which allows it to be stored and implemented in a manner similar to regular parachutes. The wing has an aerofoil cross-section which is sewn in a way to maintain the shape of a wing. Vents are cut to help maintain stability between cells and stabilizer panels add steering to the canopy design. The aspect ratio of the canopy is generally limited to a maximum of about 3, and the lift-to-drag ratio is also limited to about 3. As such, the parafoil is a gliding device with a gentle stall. Parafoils are used by most often in a sporting context, but are finding increased employment for military personnel and cargo delivery applications. Long range (15 miles) cargo delivery systems are controlled by auto pilot and can deliver a 10,000 lb.-plus load with great accuracy.

Early parachute designs predominantly-used silk in parachute production due to its light weight and strength, but silk has largely been replaced by modern materials. Fabric and geometrical permeability are carefully considered during the design phases of the parachute. Dome-type parachutes are constructed from a series of triangularly-shaped sections of fabric called gores. Ram-air parachutes utilize two layers of rectangular fabric which are attached via nylon ribs to create individual cells that capture high-pressure air.

The following materials make up the majority of a parachute assembly, each with their own benefits and drawbacks.

There are several ways to differentiate between parachute types, but it is easiest to identify them by deployment sequence. 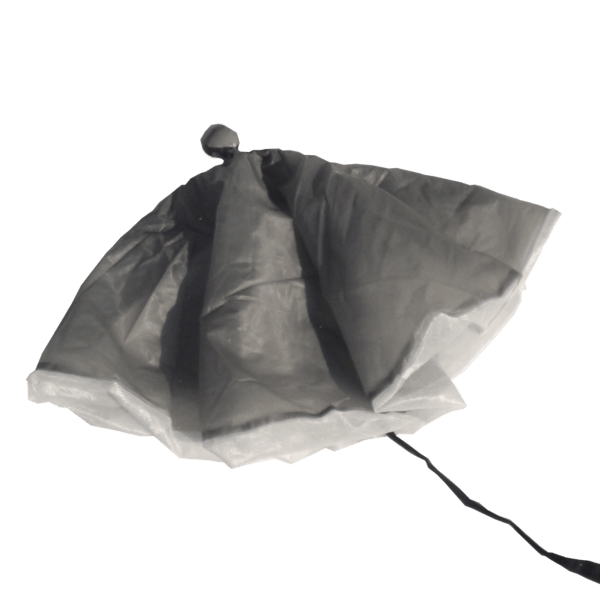 There are essentially two types of main parachutes that are classified by their aerodynamic principles: ballistic parachutes, which are solely designed to produce a retarding force for payloads, and steerable parachutes, which are any type of parachute capable of piloted directionality due to vents strategically placed in the canopy. Ballistic parachutes are the preferred design for emergency situations and cargo delivery; small charges deploy the canopy in an extremely rapid manner and allow them to be opened at very low altitudes. Steerable parachutes are utilized in most other instances.

Some parachute designs and their specifications are listed below. A more thorough evaluation of each type is provided by ESDU document 09012, which is available in the Standards section below.

Deploying one or more of the same type of main parachute is an effective way of slowing the descent of objects through the atmosphere. Parachutes that are clustered typically exhibit better stability than if deployed individually, while maintaining a high degree of drag. The redundancy better ensures safety if one parachute fails, and clusters of up to 20 parachutes have been successfully deployed.

Rarely, parachutes suffer malfunctions, but it does happen for a variety of reasons. Some estimates place main parachute failure at once for every 1,000 activations. For this reason, all free-fall parachutes are provided with a reserve chute which can be utilized if the main parachute fails. Typically, the main parachute and the original pilot chute are released from the payload to prevent them from interfering with the reserve, though it is possible to land with two separate deployed canopies. Payloads and parachutes are typically connected by the three-ring release system, animated below, which allows them to be disconnected rather easily. Reserve chutes are activated by an auxiliary ripcord, which frees the pilot chute from its pouch, and in turn pulls and deploys the reserve chute from a separate section of the deployment bag. While a main canopy will retain its pilot chute and bag, reserve chutes do not. Furthermore, main canopies are frequently folded and packed by the user, but reserve chutes are periodically repacked by certified riggers.

Unequivocally, parachute design and evaluation is best completed under reference from ESDU document 09012 — Aerodynamics of Parachutes, assembled from the knowledge and experience of the ESDU aerodynamics technical committee. Many states have passed legislation which requires parachutes to be monitored for their mechanical proficiency and for their deployment to be supervised by skilled professionals. Perhaps the most notable government standard in regards to parachutes is the United States FAA's CFR 14, Part 105: Parachute Operations.

Further industrial standards regarding the use of parachute have been developed, in large part due to the extensive range of applications in which the reliable performance of the chute is critical; a selection of these standards follows.

MIL-DTL-7620 — Parachutes for cargo; extraction from aircraft and deceleration