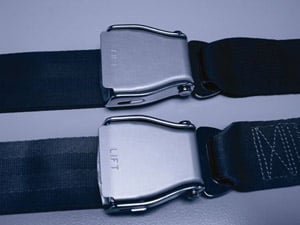 Seatbelts or safety belts are belt assemblies that consist of a belt and coupling to hold the occupants of a vehicle from moving or being ejected from the equipment in the event of an impact. They are typically nylon belts with a width sufficient to secure an occupant without seriously injuring them. Some seat belts, called lap belts, are secured at only two points around one’s waist. Other seatbelts have three connection points and in addition to a belt around the waist include a belt that goes over ones shoulder like a sash. Belts with four or more connection points also exist and may be found in child safety seats, race cars and other more inherently dangerous vehicles.

Lap seat belts became mandatory in 1965 in all vehicles sold in the United States.  They were one of the first pieces of safety equipment mandated by laws on vehicles sold in the United States.  Now, the three connection point variety is mandatory along with other safety devices like air bags.  The use of seatbelts in automobiles by motorists is also governed by law in most US states.

Seatbelts have a longer history of use in aircraft than in automobiles. In World War 1, some planes were given seat belts so the pilot wouldn’t fall out of the cockpit if he flipped his plane upside down. Seatbelts were mandated in commercial aircraft for crew and passengers by the US FAA long before they were mandated for cars.

Seatbelts protect an occupant of a vehicle in case of a crash. They also keep the occupant in their seat during any sudden acceleration, like in a sharp turn or in emergency braking. This is based on the first law of Physics where any object in motion wants to stay in motion at the same speed and direction. So any hard maneuver may cause someone inside the vehicle to get thrown out of their seat and then hit something hard since they are not connected to the rest of the vehicle and won’t accelerate and turn with the vehicle.

All modern seatbelts in vehicles have spring loaded reels, usually on the top of the shoulder belt part in the door jamb. The reels wind up and retract the excess belt. This reel has a release that allows the belt to pay out or retract if you move slowly, such as reaching down to pick something off the floor of the car. It has a device, called the emergency locking retractor or ELR, that will lock the belt in place if the ELR senses a sudden acceleration or deceleration. This supersedes the older style belts, called static belts, where you had to manually tighten them down by pulling the end of the belt through the female end of the buckle, much like a belt, or tie down strap on a piece of luggage. The older style buckles were usually the older lever style releases.

Most aircraft seatbelts still use the older style manual tightening, or static, belts and buckles which are both stronger and simpler. Aircraft passenger seats usually have just lap belts while the cockpit crew seats use the more complicated three or four point harnesses.

Rotary buckles allow multiple straps to be secured to it, such as a five point lap, crotch and both shoulder straps found in race cars. These buckles allow the user to easily release all of them in one simple action if they have to get out quickly, These are specialty types not commonly found in normal vehicles or aircraft.