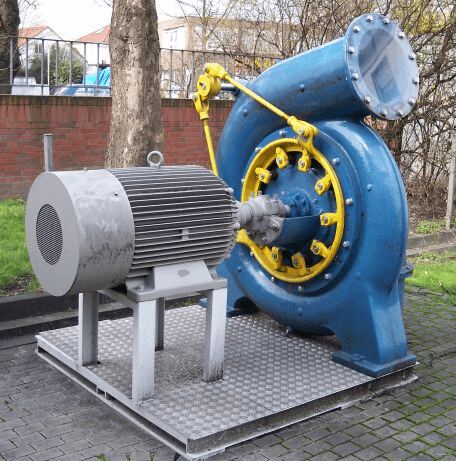 Hydro turbines convert water pressure into mechanical energy. When used with an electrical generator, the movement of the turbine’s runners or propellers turns a shaft to produce electricity.

There are three basic types of hydro turbines: impulse, reaction, and submersible propeller. All produce clean energy or green energy—power from renewable resources.

Inlet sizes and outlet sizes are specified in English units such as inches (in.) or metric units such as centimeters (cm). Hydro turbines are available in a range of output voltages and should match the overall voltage of the electrical system.

In terms of features, smaller hydro turbines (micro-turbines) may include an integral heating system to prevent freezing in cold weather conditions. Flywheels are often used to prevent excessive surge pressures and provide more stable speed-control. Some hydro turbines include a charge controller that sends power to batteries and electrical equipment, but diverts excess power to prevent overheating. There are two types of charge controllers: voltage-regulated and proportional. Voltage-regulated shunting systems send 100% of the turbine’s output to a diversion load when the voltage reaches a set point. By contrast, proportional controllers send only the surplus energy to the diversion load.

Large hydro turbines are used to produce hydroelectricity from the potential energy of water behind dams. Normally, hydroelectric power is stored during off-peak hours and applied to peak-load demand. Most hydroelectric reservoirs and other hydropower facilities are capable of producing large amounts of power on demand.

IEEE Spectrum—How Much Water Does It Take to Make Electricity?