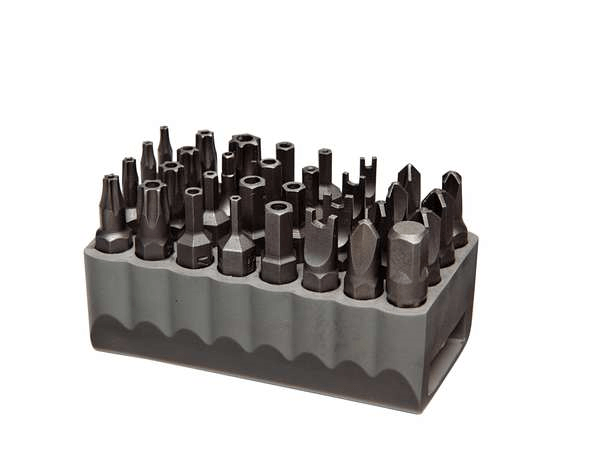 Driver bits apply torque to screws. More specifically, they are the interface that transfers torque from a tool, such as a screwdriver, t-handle, or drill, to the mating recess on top of a helically-threaded fastener. Driver bits are frequently interchangeable, come in variety of diameters and lengths, and are complemented by many accessories.

The tip of the driver bit inserts into a depression that has been machined into the top of screw head in a male tool / female fastener configuration. Female tool / male fastener combinations exist, but are less common. The rotary drive of the tool applies torque to the screw, which due to the threads machined along its shank gains traction against the workpiece. Wood screws have a pointed tip and sharpened threads to assist the assembly of items to wood substrates. Machines screws have a flat or tapered point and assemble pre-tapped workpieces, or pre-drilled substrates in union with a nut.

Slotted and Phillips drives are unquestionably the most common type of screw drive, while hex socket (Allen®), square (Robertson®), and hexlobe (Torx®) are also readily available. Square and hex drives are most common for bolts; most other bolt styles are incompatible with driver bits. Specialty styles are employed sparingly but offer unique attributes that make them suitable for limited applications. Some large-scale manufacturers may utilize proprietary drive types (such as Apple Inc.'s pentabular screw) that are not commercially available and are not listed below, though drives for these screws may be available depending on the market. Variants of drive types can sometimes be driven by the original bit.

Sockets are often used as bolt drivers in conjunction with an extension or adapter.

With the exception of slot, Phillips, and tri-point drives, any of the drive styles above can be turned into a security drive. These modified drives have a center pin reject in the middle of the screw to prevent common tools and mismatched driver bits from applying torque to the screw. While the fastener is by no means locked in position, the ownership of compatible tools is rare, and only authorized individuals with the prescribed instruments can manipulate these fasteners.

One-way drives are screw designs which guarantee the driver bit cams out if fastener removal is attempted. While a one-way screw can be inserted with a basic slotted screwdriver, it can only be removed by destroying the screw, destroying the workpiece, or drilling holes in the screw head to make it spanner-drive compatible.

S2 tool-grade steel is most common. The S represents a type of shock-resistant steel with an underlying silicon structure, and 2 represents the shock grade of the material (in this case being on the low-end of the shock-level scale: S1, S2, S5, S6, and S7). S2 steel is composed of 97% iron, 1.05% silicon, .4% to .44% carbon, and .5% or less of the following materials: vanadium, manganese, molybdenum, phosphorus, and sulfur. It has been also been heat treated to increases its hardness.

High-speed steels are also common and have largely replaced high-carbon steels as they can handle higher temperatures. Tools of this material typically are steel alloys containing chromium and vanadium, along with ratios of manganese, phosphorus, sulfur, and silicon.

Tool steels are often coated or finished to improve durability. The following are common finishes, along with their imparted properties.

Drive styles are manufactured in different sizes, each of which interfaces with individual sizes or a range of screw and bolt sizes. The following tables represent the common sizes of various screw/bolt drives, as available. Many drivers are denominated by the size of fastener they interface with; instances where this rule of thumb is not applicable are noted.

The following are attributes available in some driver bit products.

Only the most basic fastener driver styles have developed industrial standards, and some are linked below. Some driver styles, such as Robertson® and Torx®, are regulated by the patent or copyright holder, but that does not outrule counterfeit driver bits. In other cases, drive types are not manufactured in an array that requires regulatory standards (at least yet).

Firehydrant.org—What Shape Is the Nut on a Fire Hydrant?

Instructables—When a Phillips is not a Phillips...