Slewing drives are gearboxes with the ability to handle both radial and axial loads and deliver a high rotational torque. These mechanisms generate a rotational movement along either a single axis or multiple combined axes. A finished gearbox is assembled from seals, bearings, housing, gearing, motors, and other manufactured components.

Slewing drives work well in applications requiring high torque supplied at reduced speeds. They provide superior precision in positioning accuracy and rotating movement due to their zero-backlash and smooth component operation. These mechanical devices are ideal for applications such as cranes, satellites, radar trackers, oil tool equipment, and various fields dependent on similar functionality. They are made of phosphor bronze and steel or materials with related wear and deformation properties. Slewing drives feature enclosures that provide protection against environmental factors including dirt, dust, and water.

Slewing drives offer a myriad of sizes, capacities, and mounting features to fulfill a multitude of functions. Standard models have dual-axis drives turning simultaneously, or two drives positioned on the same axis. The two-drive setup allows two worm threads to drive a ring gear along one axis.

With a specialized application in solar tracking systems, slewing drives assist in generating a higher solar power output. This is achieved by facilitating equipment mobility with a focus on the sun. Custom solutions are made for applications requiring exceptional load capacity utilizing dynamic and static torque.

Slewing drives depend on worm gear technology, whereby a horizontally mounted worm acts as a driver for the gear. As the horizontal screw rotates, it turns the gear around the axis oriented perpendicularly to the screw axis. As a result, the gear speed is reduced while the torque is multiplied proportionately. The number of worm threads and gear teeth determine the applicable speed ratio.

The hourglass mechanism resembles the traditional worm gear technology and offers an improvement in gear functionality. Instead of relying on a single point of contact as with traditional models, the hourglass worm profile allows up to 11 gear teeth to make contact with the worm shaft. The ability to engage multiple teeth at once makes hourglass slewing drives durable, stronger, and more efficient.

Slewing drives offer a multitude of features, including:

A slewing drive's ability to handle varying loads and provide rotational torque strength makes it suitable for a wide range of applications. These include: 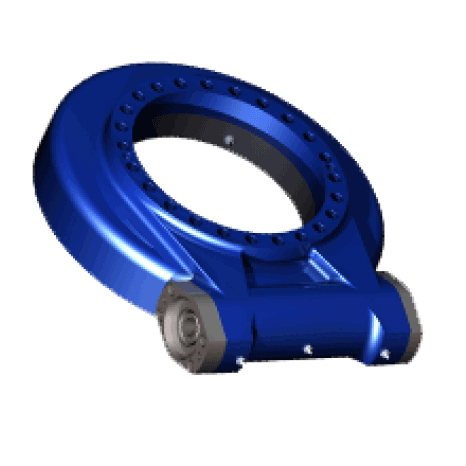 Construction: Slewing drives operate with systems providing power to construction equipment that is subject to heavy loads of variable operation. They are appropriate for this field due to the ability to produce high torque and smooth operation in limited spaces. Crowded construction areas are typical with equipment such as winches, hoists, and cranes.