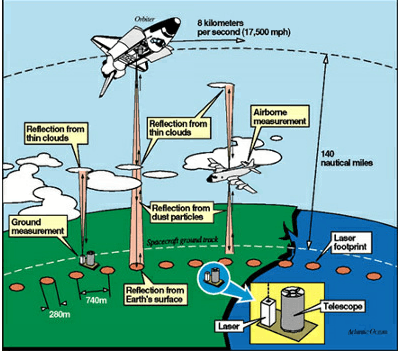 LiDAR is a technology that uses non-visible electromagnetic radiation (infrared or ultraviolet are examples) to locate objects and measure distance to them. LiDAR, which stands for light detection and ranging, is similar to Sonar (sound navigation and ranging) and Radar(radio detection and ranging). Sonar measures distance by emitting a powerful sound pulse and measuring the time it takes for the pulse to return after impinging the object. By frequently doing this and moving the Sonar to point to different locations, we can “map” an entire environment. Radar uses the same principle, but instead of sound, it emits a radio (electromagnetic) wave with a much higher frequency than the frequency used in Sonar. Both systems, however, give poor image resolution.

LiDAR produces high-resolution images by using lasers to measure distance in a similar way. The system is designed to represent every distance measurement by one pixel. By taking millions of measurements, millions of pixels can be rendered on a screen resulting in an image rich in details, similar to black-and-white photographs. Each pixel carries certain light intensity, and all the pixels together form the image.

LIDAR sensors emit focused beams of light pointed at an object and measures the time it takes for the reflections to be detected by the sensor. The time of the reflected ray is used by a sensor to compute ranges, or distances, to objects. When laser ranges are combined with position and orientation data generated from integrated GPS and inertial measurement unit systems, scan angles, and calibration data, the result is a dense, detail-rich group of elevation points, called a "point cloud."

Point clouds are specific points on the Earth's surface from where the beam has been reflected because these points collect the values for the three dimensions — latitude, longitude, and height — that specify the point. Mapping all the points on an object allows the LiDAR sensor to generated accurate 3D images of geo-spatial objects such as building models, contours, digital elevation models, and others.
LiDARS are remote sensing devices. There are two classes of remote sensing technologies that are differentiated by the source of energy used to detect a target: passive systems and active systems. Passive systems use external sources — like the sun — to generate and collect data using the source radiation. Active systems generate and direct energy toward a target and subsequently detect the radiation. LiDAR systems are active systems because they emit pulses of laser beams and detect the reflected light. This characteristic allows LiDAR data to be collected at night when the air is usually clearer and the sky contains less air traffic than in the daytime. In fact, most LiDAR data are collected at night. Unlike radar, LiDAR cannot penetrate clouds, rain, or dense haze and must be flown during fair weather.
LiDAR instruments can rapidly map objects by sending pulses at sampling rates greater than 150 kilohertz. The resulting product is a densely spaced network of highly accurate point clouds. Many LiDAR systems operate in the near-infrared region of the electromagnetic spectrum, others operate in the green band to penetrate water and detect bottom features. 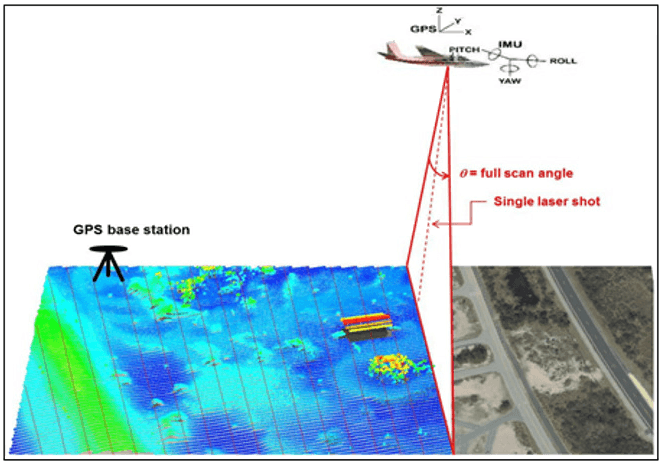 There are several types of LiDAR, most of which are based on application.

Being a data collection device, many of the specifications have a common base with these types of general data collection and storage tools. Following recommendations by NOAA and other federal agencies, the basic parameters to specify a LiDAR system are as follows: