Higher thermal conductivity values, such as those of metals, indicate materials are able to conduct greater amounts of heat, while materials with lower values are effective as thermal insulators.

Thermal conductivity sensors can be used to measure solid, liquid, or gas states and are useful in numerous applications, including thin film manufacturing, material testing, building science, and power generation.

Liquid thermal conductivity sensors use similar techniques and principles as solid material thermal conductivity sensors. Measuring thermal properties of liquids is difficult due to the added effects of convection and movement of the fluid. To achieve an accurate measurement of thermal properties of a liquid sample, the sample must be absolutely still in relation to the sensor. Bulk movement of the fluid causes errors in the thermal properties measurement. Convective heat exchange in fluids can be of two types: forced and free convection. Forced convection occurs when the fluid is churned or stirred by mechanical means. Free convection is when an object at a different temperature is in the fluid.

Interestingly, there are thermal conductivity flow switches that use the cooling effect created by a flowing liquid to monitor the velocity of the fluid when the conductivity is known. This type of flow meter creates very little impediment to the flow of the liquid or gas and has no moving parts that can wear or fail. 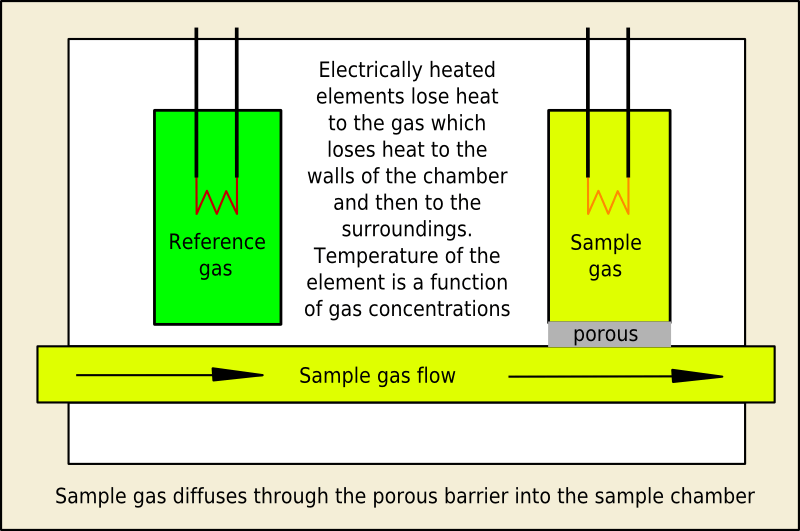 Thermal conductivity detectors are often used in gas chromatography and as a lower cost-of-ownership alternative to mass spectrometry. They provide stable measurement and good accuracy. TCDs perform well in terms of drift accuracy, linearity, and repeatability.

Thermal conductivity, along with thermal diffusivity and specific heat capacity, define a material’s ability to store and transfer heat. The true and specific measurement of these properties is vital for any process or material that undergoes a large or fast temperature change, or one for which the tolerance for temperature change is critical and precise. There are a broad range of methodologies for testing heat conductivity, including, but not limited to: axial flow methods, the absolute axial heat flow method, the comparative cut bar method, the guarded/unguarded heat flow meter method, the guarded hot plate method, the hot wire method, and the probe method. Thermal conductivity sensors reduce the complexity, cost, and time to complete such measurement and are advantageous in production or lab environments that see frequent requirements to measure this material property.