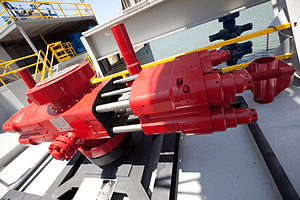 Blowout preventers (BOPs) are specialized valve assemblies that prevent uncontrolled flow of formation fluids during well drilling operations. Formation fluids begin to flow up the annulus when there is a shift in the balance of the hydrostatic pressure. The BOP is a fail-safe mechanism that safeguards the well until hydrostatic balance is regained, most commonly through circulation of fluids in the well. Wellbores typically incorporate stacks of BOPs for redundancy.

Blowout preventer stacks or assemblies contain several BOPs stacked on top of each other. There are two basic types of BOPs: annulars and rams.

Annulars close the wellbore when a formation kick is first observed and may be activated while drilling activity continues. They consist of elastomeric packing units and use the principle of a wedge to seal the borehole and tubular element, an area of the wellbore known as the annulus. One or more annular BOPs are typically positioned above a series of several ram BOPs.

Rams are a secondary measure to seal off the wellbore when hydrostatic pressure remains unbalanced. Rams consist of opposing pistons or plungers and operate analogous to a gate valve. There are several distinct types of ram BOPs, each with a unique function.

A BOP stack consisting of both annular and ram preventers may also incorporate additional safety valves, such as a kill line valve and a choke manifold.  Annulars may be used to prevent the onset of a formation kick, sealing the annulus while drilling continues. Elevated reservoir pressure may require additional safety precautions, including the operation of a choke manifold to circulate mud of the proper weight and counter a formation kick. Additional measures that further restrict undesired flow of formation fluids include redirecting mud from the wellbore through the kill line valve or activating any of the ram BOPs in the BOP stack.