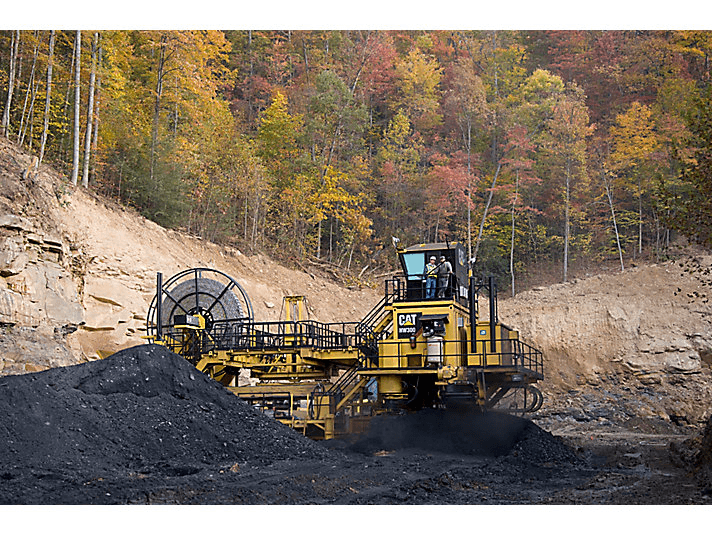 Highwall miners link underground and surface mining operations by extracting coal from exposed horizontal seams in open-pit mines. This is done via a mobile system that contains a continuous miner controlled from the operator's cabin, a retractable conveyance system, and a vertical conveyor that handles and stacks the coal for transport.

The point at which the cost to remove the overburden exceeds the economic value of the covered resource in a surface mining operations is referred to as the final highwall. The exposed strata left by surface mining operations offers exposed coal bed seams that can be efficiently extracted by highwall mining techniques. Highwall mining has advantages compared to underground mining, such as a higher level of safety due to the use of remote controlled cutterheads. Highwall mining also requires a relatively small crew of three or four people.

Highwall miners extract coal from exposed seams by driving a cutter module into a coal seam under a highwall. The highwall mining machine is positioned on the pit floor or on a bench beside the highwall in front of the coal seam. A cutterhead attached to a string of push beams is thrust into the seam. The coal is mined by the shearing action of the cutterhead that is raised and lowered to dig out the entire height of the coal seam. The mined coal is transported out of the seam along conveyors inside the push beams. Additional push beams can be added to the string to extend the depth into the highwall to which the operation can mine. Each push beam segment is coupled to the next by a connection that supplies control and power to the cutterhead. A control system automated by a device such as a programmable logic controller typically controls the cutterhead operation remotely from the cab, overseen by an operator.

Some highwall miner systems offer advanced detection systems to guide the cutting operation with greater accuracy. A gamma-ray detection system allows the system to detect gamma radiation emitted from surrounding rock to impose a limit to cutterhead motion as it approaches the boundary between coal and rock. This allows the operator to direct the cutter module precisely in applications where it is desired to leave fixed amounts of coal in the roof and/or floor, such as in weak strata conditions. A solid-state, fiber-optic, gyro-based navigation and steering system can offers higher precision control over the cutterhead position by reporting real-time cutter location data.

The push beam mechanisms may be totally enclosed to prevent contamination of the mined coal. The couplings between each push beam segment can offer flexibility to allow the string to navigate unevenness in the land.

An anchoring system consisting of drills that penetrate into the surface below the highwall miner can offer improved stabilization to ensure accurate positioning of the cutting operation.