Mining shovels, also called power shovels or front shovels, are used to excavate large quantities of soil and rock fragments in surface or strip mining operations. They are characterized by their immense size: mining shovel booms regularly exceed 200 feet in length and the complete rig can weigh up to 10,000 tons. Power shovels can have buckets with volumes of up to 180 cubic yards. 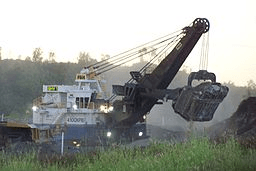 Mining shovels are mounted on caterpillar tracks with a rotating deck. The vehicle's combustion engine, operating instruments, and counterweight are located on the deck. The deck contains motors that directly drive the tracks and winches. The bucket is attached to the end of an arm, and can be hydraulically or electrically powered. The largest of these mining shovels are electrically powered directly from an electrical power grid.

Mining shovels are larger versions of their road and building construction counterparts. Since they rarely have to be moved off the mining site, their size and weight are not critical unlike normal construction equipment. Typically, road and building construction rigs will have to be frequently towed by truck trailer back to the shop and then to other job sites. With mining shovels, moving the rig is a major logistical issue since they cannot be towed or driven on normal roads or even hauled in one piece on rails. Mining shovels must be broken down into sub-assemblies and moved in pieces from the factory to the mine site. For that reason, these mining shovels usually spend their whole life at one mine site.

Dragline excavators are huge crane-like mining machines that are built on site, weighing up to 13,000 tons. They are powered directly from the power grid with high voltage (up to 20 kV) and up to 6 megawatts of power. They are used to remove the top layer of a strip mine coal seam. They work by casting a huge bucket, similar to casting a fishing line. As the bucket is drawn back, it scoops up the top layers in a 60 cubic yard capacity shovel bucket. Dragline excavators require large amounts of power to operate. These custom rigs are built on site and, due to their extreme weight, are usually abandoned except for key parts when the mine gets closed.

Normal mining operation of mining shovels consists of the shovel operator lowering the bucket into a soil bank or rock face, raising the bucket through the material, and then retracting it. The shovel rotates the bucket away from the cut, dropping the burden into a huge haul truck or rail car. The process is then repeated.

Mining shovel rigs are expensive, custom-made items. Machines appropriate for a prescribed job are individually developed by a buyer and a manufacturer’s engineers and sales team. The logistics of moving a mining shovel to the mine site would also need to be considered.