Pump operation and performance can best be described by a few fundamental parameters; flow rate, pressure, head, power, and efficiency.

All pumps have a characteristic or performance curve that describes the flow rate produced at net or total head. Pump specifications relating head and flow rate correlate to those found on its characteristic curve. A simplified curve for a centrifugal pump will look something like this: 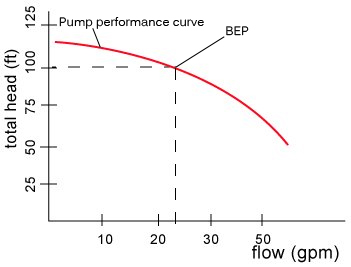 The pump curve illustrates the available total head at a given flow rate of the pump. Generally, more head is available in the pump as flow rate decreases. Manufacturers usually designate an optimum or best efficiency point (BEP) of the curve, which is indicated in this graph by the dotted line. Thus, this pump runs best when supplying a net head of 100 ft, which will provide a flow rate of 23 gpm.

When selecting a pump for incorporation into a system, users should map the system curve alongside the pump curve. A simplified incorporation of this curve may look something like this: 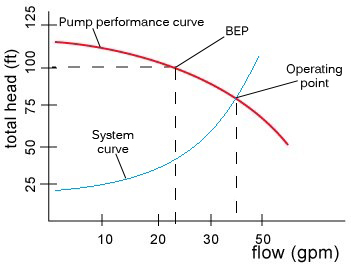 The system curve illustrates the required head for different flow rates in the system. It is constructed using a form of Bernoulli's equation for fluid mechanics, which is beyond the scope of this guide. Generally, more head is required as flow rate increases due to frictional forces and other losses in the system. The operating point of the pump in a system should be where the pump curve and system curve intersect. The best pump choice for a system is one in which the required operating point intersects at the pump’s BEP.

Selection Tip: Since every system is unique and has specific head requirements, the ideal choice mentioned above is not always commercially available.

Positive displacement pumps do not utilize fluid momentum, meaning that flow rate is relatively independent of pump head. Thus, (unlike dynamic pumps) positive displacement pumps have a definite capacity across a wide range of head pressures (as shown in the characteristic curve below). Slippage is the result of high discharge pressures causing some liquid to leak back to the pump suction, reducing capacity. 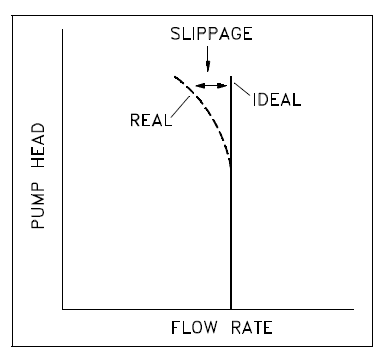 Pump failure results when the total head of the system exceeds the maximum head of the pump.

Next Generation of Long-Lasting Above-Grade ....