Underground locating equipment includes a variety of technologies that accurately locates pipes, cables, and other objects such as septic tanks or blockages in sewer lines.

After locating and tracing a line, operators will typically note line locations with utility spray paint or flags.

EMSs utilize buried locating markers to facilitate quick mapping of underground lines for future purposes. A passive antenna and circuit is buried in a color-coded housing, and it uses the radio signal from an above-ground transmitter to power a response. This method is more expensive than others, but is very efficient, and is therefore used for critical applications such as power and fuel lines.

Cable fault detectors locate electrical faults in power lines. Damage to underground power lines will increase the resistance of the line, and also poses a hazard for overheating, arcing, and loss of circuit. Cable locators consist of a receiver that perceives the electromagnetic field created by a power line or telecommunications line. A transformer can strengthen a weak field as well as measure voltage and resistance. To find the fault within the line, a time-domain reflectometer (TDR) is commonly used. It pulses narrow electrical charges that are reflected by flaws in the line. The shape, size, and time-delay of the reflection pinpoints the location of a fault. A TDR requires a separate cable locating device. 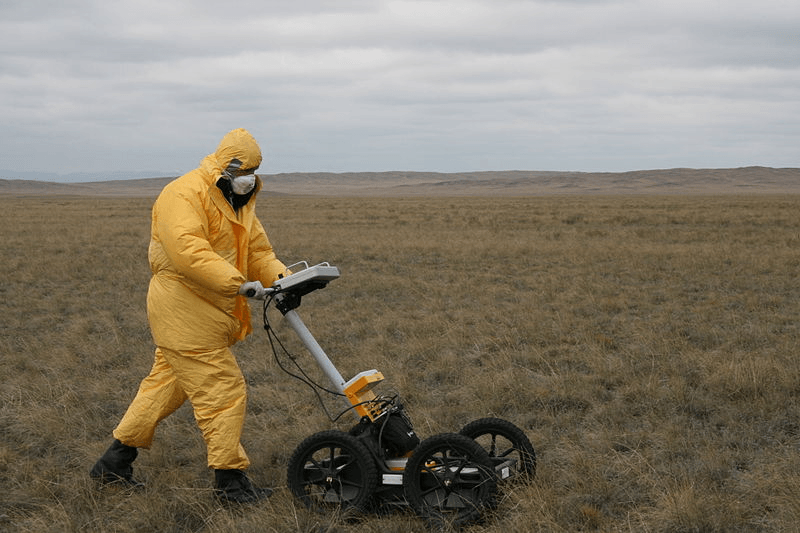 GPR emits high-frequency electromagnetic pulses into the ground to map subterranean features. Soil penetration increases as frequency decreases, but spatial resolution suffers. Changes in the dielectric constant of the soil medium reflect the radar, identifying the location of materials. Collection occurs by rolling a GPR system over the area. This is a fast, inexpensive locating technique that also registers non-metallic utilities.

A metal detector uses an oscillating electromagnetic field to detect metal objects that reflect the signal via induced eddy currents. The detector can also interpret distance and will use tones or beeps, and possibly a visual display, to indicate the presence of metal. Many metal detectors can also indicate the type of metal located as each metal has a different phase response. Detectors often allow the operator to set parameters such as sensitivity, sensing width, and track speed, amongst others.

An RF transmitter uses an electromagnetic field, like other locating technologies. For locating a conductive utility, the transmitter is directly attached or clamped to the line or it can wirelessly induce a signal. A snake mechanism can be inserted into non-conductive conduits to radiate the field along the snake. An above-ground receiver is used to trace the line.

Sound detectors utilize a microphone mechanism to identify leaks, primarily in pressurized water and gas lines. These leaks have characteristic sounds that are propagated for hundreds of feet along the line. Auditory detection is influenced by factors such as pressure, pipe specifications, soil type, compaction, depth, and surface texture. Operators can initially identify the presence of a leak by listening to hydrants and meters, and then following the sound to where its loudest.

Sonde/beacon locators utilize remote probes, called sondes, that emit a signal and are inserted into the utility line. They help identify blockages and collapses in non-metallic sewers, drains, ducts and pipes. Sondes are intrinsically safe and manufactured for specific applications. They are inserted into lines on the end of rods or a device akin to a plumber's snake. An above-ground receiver locates the position of the sonde within the line.

Excavation hotlines and websites allow anyone to request that local utilites demarcate utility lines on-site. Requests are usually completed in several days for free. This service reduces the danger and disservice risks from uninformed digging. Resources include:

The majority of line locating equipment is handheld, for use by an individual or crew. However large units and modules, such as those with a generator to induce a strong electromagnetic field, as well as GPR, will be mounted on wheels so the user can push or tow the unit. Automobiles can be equipped with the above equipment, though it is uncommon.

Display: most modern utility locating equipment includes a digital display for visual representation of line location and depth; it is commonly a backlit LCD

Operating frequency: the communication channels of the transmitter and receiver; multiple frequencies are common

Detection depth: the maximum at which lines or markers can be buried while still being perceived by the receiver; depths of more than 20 feet are uncommon

Power source: locating equipment is usually powered by batteries, though some may include a rechargeable lithium-ion battery; some models offer the user a choice between batteries or recharging

Transmitter power: the maximum wattage the transmitter can apply to a line to enable tracing

Receiver to transmitter range: the farthest distance at which the locating equipment can communicate; distances of one mile are possible, though transmission distance is affected by soil traits and surface obstacles

Couple style: how the transmitter resonates the frequency in a buried line, either via a clamp or wireless induction

Industries and applications that use underground line locators include: electric utilities; water and sewage; oil and gas utilities; cable and telephone companies; and mass transit and rail companies.