Fireproofing services often involve coating steel girders inside structures. While steel is non-combustible and no normal fire can melt steel, heat from a fire can weaken the steel, causing the girder to bend, and then fail, bringing the whole structure down. Fireproofing insulates the steel from the fire’s heat so the girder will heat up much more slowly. This allows more time to either extinguish or evacuate the building, minimizing damage and injuries.

Cementitious Fireproofing: These are gypsum-based, plaster-like coatings that look like white stucco when dried. These coatings are sprayed on the surface of the structural members that need protection.They are usually used t 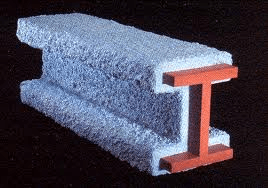 o keep girders and beams below 540 C, where the steel will bend. The coatings are also used to protect structural concrete, such as in vehicular tunnels, from petroleum and other intense fires. Concrete members need extra fire insulation to preserve their structural integrity.

Intumescent Fireproofing: Intumescent paints expand and char when heated to form a heat resistant barrier. They usually contain sodium silicates. The paint coating thickens, entraining air and forming a char layer, providing greater insulation under high-heat conditions. These coatings are sprayed or brushed onto the surfaces to be protected. While there is some interchangeability with the cementitious coatings, these paints are usually used on pipes and other metallic items like tanks and valves, where the rough thick coating of cementitious fireproofing would be in the way. Intumescent putty is used in firestops.

Firestop Fireproofing: Firestop fireproofing involves sealing all openings and joints in fire-resistance rated walls and floors.  HVAC contractors install fire dampers to fill the ductwork holes and to seal the ducts where they cross firewalls. Hole cuts for pipes and electrical wiring trays are usually filled completely with a specialty fire sealant made from a gypsum or elastomeric substance.

Understanding the Basics of Firestopping: Part One