Waterstops are static seals installed between joints of a concrete structures to prevent the passage of water or other fluids. The waterstop is embedded in the concrete or across and/or along the joint. In order to select the right waterstop for the application there are several things to consider. These include, the structure type, joint type, joint movement type, chemical containment requirements, and the method for securing the waterstop in position (hog rings, grommets, etc.) 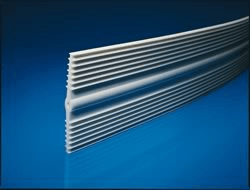 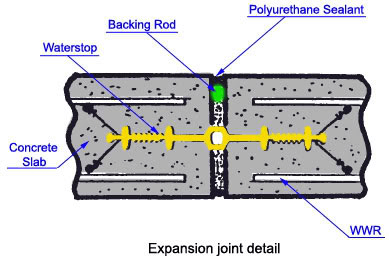 Concrete waterstops rose to prominence as concrete use became the standard choice in commercial and residential construction in the mid-20th century. After concrete bridges started dotting the map in the early 1900s and the Hoover and Grand Coulee dams were built from concrete in the 1930s, it took hold as the most used material in new construction. Due to the porous joints created when dispensing concrete in sections, the need for waterstops was immediately apparent. PVC was the predominant choice for waterstops by the 1940s and continued for decades. While PVC is still the most common waterstop material, more advanced and better-performing waterstops have quickly caught on in recent years.

Waterstops are embedded into concrete or installed along joints, creating a barrier in the vulnerable areas that prevents the passage of water or other liquids. The waterstop helps inhibit the passage of liquid in a variety of ways depending on the material used. Some waterstop materials are hydrophobic, creating a diaphragm that repels water and other liquids. Others are hydrophilic, expanding when in contact with water so that the compression generated by the expansion forms a seal. The primary composition of materials in waterstops are constructed to interlock with concrete and designed to accommodate any lateral or transverse movement that could cause a joint to open or misalign.

Waterstops utilize techniques during installation that force seals to embed into the concrete. In some applications, it is necessary to repel water and liquids entirely. Special circumstances require the prevention of liquids from moving beyond the barrier created by the waterstop. This feature is associated with needing to keep solvents, hot petroleum oils and chemicals from making its way past the seal itself. Additional features include alternative physical forms such as strips. A strip is capable of covering a vast area when purchased in large rolls or pastes.

Waterstops are essential for construction projects where concrete is used to retain water or exclude it. These types of applications in residential, commercial and industrial construction include:

Specifications are made available in the following four areas:

While PVC has been and remains the predominant material used in waterstops, most often in residential applications, there are a wide variety of waterstop materials now in use. Specific applications demand materials such as:

The type of liquid needing retention or exclusion is one primary factor necessary for choosing the appropriate waterstop. In addition, the joint type requiring the seal is the other critical factor. Together these two characteristics are applied to the functional aspect of the concrete itself. Concrete joints with movement need a mechanical waterstop such as PVC, rubber, neoprene, stainless steel or copper.

DIN 18187 - Sealing of Joints in Concrete with Waterstops