Fabry-Perot etalons (simply called etalons) are wavelength selecting optical devices that are based on the Fabry-Perot etalon theory. The name "etalon" (from the French word for "measuring gauge" or "standard") was coined by Charles Fabry and Alfred Perot to describe a transparent plate between two parallel reflecting surfaces (a planar etalon). While almost all etalons are planar, etalons can also be confocal (or spherical). Confocal devices have concave reflecting sides with a transparent plate in between. The transparent plate has a length equal to the radius of curvature of the reflecting surfaces. 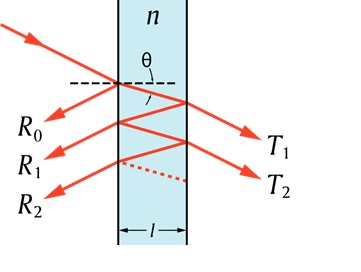 Thus a single beam of light can, via this process of partial reflection and transmission, interfere with itself many times, enhancing some wavelengths and reducing others until a characteristic spectrum exits from the right hand side. It is important to note that the process described above, which involves an infinite number of lower and lower amplitude reflections and transmissions, occurs instantaneously, with the observed effect being only the characteristic spectrum of the etalon (T=T1+T2+T3+…+Tn).

Etalons can range greatly in size, varying from micro-optic size to as large as meters in dimension. Etalons need high quality, very flat optical surfaces, materials with excellent transparency, and extreme parallelism to achieve high performance. Etalons can be made from a wide variety of materials including fused silica and silicon. Most often fused silica or diamond etalons are used for their stable reflecting surface distance and the ability to keep stable frequencies even with large changes in temperature. Diamond is preferred for its ability to transmit greater amounts of heat and minimize expansion. One recent innovation involves making etalons that are themselves solid optical fibers. This has resulted in the elimination of mounting, alignment, and cooling issues. Etalons are also sometimes constructed to be a slight parallelogram to avoid ghost fringes.

Etalons have a variety of applications, including lasers, radiometers, and other electro-optical devices. Fabry-Perot etalons are frequently used in telecommunications and data transmission, for example as optical filters in fiber optic models. Etalons are also widely used in lasers, spectroscopy, and astronomy to control and precisely measure the wavelength of light.