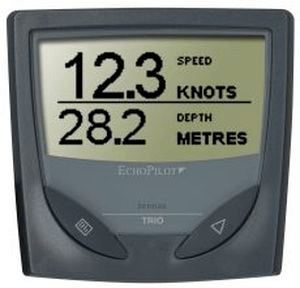 Speed logs, also known as ship logs, chip logs, or common logs, measure the speed of a vessel. The speed is determined with reference to water flowing by the hull (water reference speed) or to the seabed (ground reference speed).  Such equipment is referred to as a log due to the obsolete practice of using wood logs for detecting how fast a ship is moving. During the age of sailing, the sailors would throw logs overboard after attaching them to a rope with knots at fixed intervals. Ships speed was gauged by the total number of knots that passed by over a specific amount of time. This method led to the introduction of the knot as theu nit of measure for vessel speed (1 knot=1 nautical mile per hour). The design of the instruments employed in estimating the speed was standardized over time. A piece of lead attached to the bottom of the log improve water drag, resulting in greater reading accuracy.

In modern times, mariners utilize a variety of technologies to determine the vessel's rate of motion, including:

An ultrasonic speed detector is a measureing device that gauges speed via pulses sent through water passing by the hull. Superior accuracy is achieved using Doppler shifts from the Doppler sonar or via radio measurement of satellite signals by GPS. Ships of 50,000 GT or more and passenger vessels of 300 GT or more built after July 1, 2014, are required by SOLAS regulation to possess devices indicating both water reference and ground reference speed.

Electromagnetic -- These devices, also called EM logs, rely on a coil in an electromagnetic sensor. When the AC current energizes the coil, it creates a magnetic field surrounding the sensor. As a vessel moves through water, an electrical field running perpendicular to the magnetic field is produced. The sensor electrodes detect and deliver the resulting signal representing the ship's speed to a preamplifier, which then converts it to a digital format for viewing. This process is inexpensive and has the advantage of not requiring any moving parts. However, water salinity and temperature can affect calibration. The water flow slows down closer to the hull due to friction, affecting measurements.

Pitometer -- Also referred to as a pit log, the instrument uses the principle of differential pressure to determine an object's speed through the water. It operates by submerging a Pitot tube with an opening at the base in water. While the tube is stationary, the pressure (known as static pressure) remains constant. When the tube starts moving past the water, it creates dynamic water pressure that varies based on the velocity.  The effect of static pressure is removed to obtain an accurate measurement of the dynamic pressure for calculating the speed. To achieve this, a second tube is installed near the first with an equivalent static pressure. Movement through water does not generate any dynamic pressure in the second tube. The difference between the pure dynamic and static pressure readings indicates the speed of the moving object.

Doppler -- Doppler transducers rely on the Doppler frequency shift effect for estimating the speed of a moving body. A transducer produces high-frequency sound pulses toward both ends of a vessel using two transmitter windows. The reflected pulses are detected by two receiver windows located in the transducer. The time delay between the transmitted signals confirms the receipt of echoes from undisturbed water surrounding the object. The vessel's fore/aft speed vector is estimated by processing the signal information. A pre-amplifier then transmits this information in a digital format.

Impeller -- These logs function by attaching an impeller or paddle wheel to the bottom of a hull. They are employed on small yachts and other such vessels.

GPS (Global Positioning System) -- A sensor accesses the GPS satellite signals to pinpoint an object's speed, in both longitudinal and transverse directions. GPS receivers with integrated rate gyros and an antenna unit calculate the heading velocity, attitude, and course. The heading is then compared in relation to the vessel's magnitude and direction of motion in the water. Information delivered by the satellites is processed by the system, integrating the velocity data with the longitudinal and transverse ground speeds of the vessel. Speed vectors combined with data related to the rate-of-turn assist in differentiating between the vessel's translational and rotational movement. These are required for estimating the transverse speeds for both bow and stern as given on the docking display.