A valve can be used to stop and start as well as throttle or regulate the flow or movement of media through a system. The given and desired properties of the flow can be used when selecting a valve.

The valve flow coefficient is the number of U.S. gallons per minute of 60°F water that will flow through a valve at a specified opening with a pressure drop of 1 psi across the valve. The coefficient is used to determine the size that will best allow the valve to pass the desired flow rate, while providing stable control of the process fluid. It can be used to compare flow capacities of valves of different sizes, types, and manufacturers. The flow coefficient is different for gases, liquids, and steam and is also dependent on the pressure drop across the valve. The Cv can apply to either the opening or closing action depending on the function.

The simple equation is defined as:

The flow coefficient varies based on the media type in the system. The chart below defines the appropriate formula and variables needed to calculate Cv for each system type. 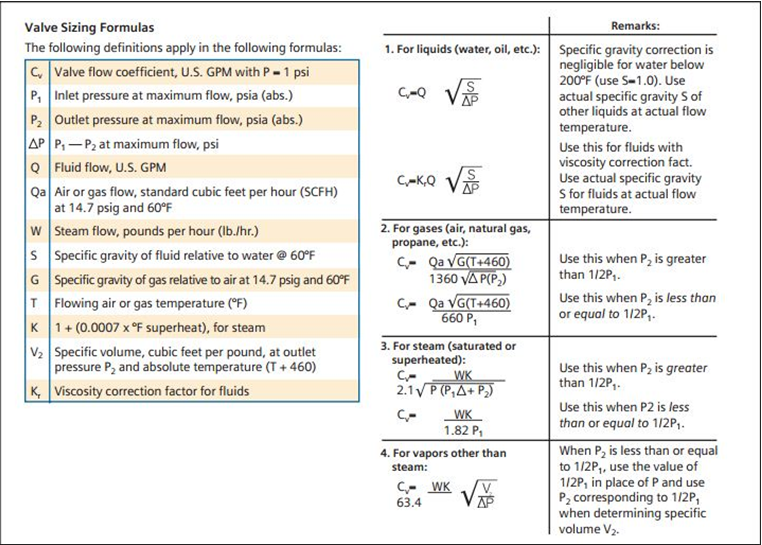 For liquids: Incompressible media- The flow rate only depends on the difference between the inlet and outlet pressures so the rate stays the same as long as the change in pressure remains the same.

For steam: Compressible media- The density of the steam changes with a change in pressure. There is a critical (choked1) and non-critical pressure drop. Critical is defined as the pressure dropping by 58% or more from the inlet to the outlet.

If the calculated Cv is too small the valve will be undersized and the process system may be starved for fluid. This also causes a higher pressure drop across the valve causing cavitation or flashing. If Cv is too high the valve will be too big leading to monetary waste and difficult machine maneuverability. A larger Cv can also be a problem for throttling because the flow cannot be effectively controlled at the openings. The location of the closure element leads to the possibility of creating a high pressure drop and faster velocities causing cavitation, flushing, or erosion.

The three common types of inherent flow can be plotted as curves on a graph; however the characteristics of these curves can only be affected by the body style and design, and the piping factors.

The curves are based on constant pressure drop across the valve and graphs are usually available through the manufacturer. For control valves, as shown below, there are six inherent characteristics. The chart is plotted as stem opening % vs. flow %. The stem opening describes how much the valve is open. In this context, valve opening refers to the position of the disc relative to the closed seat position. The three most common flow characteristics are linear, equal-percentage and modified flow. 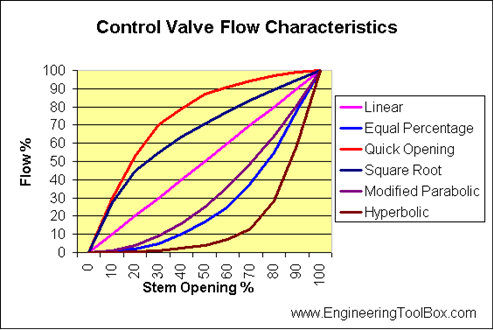 When choosing a flow characteristic, consider the direct relationship between valve opening and flow over the distance the valve stem travels. 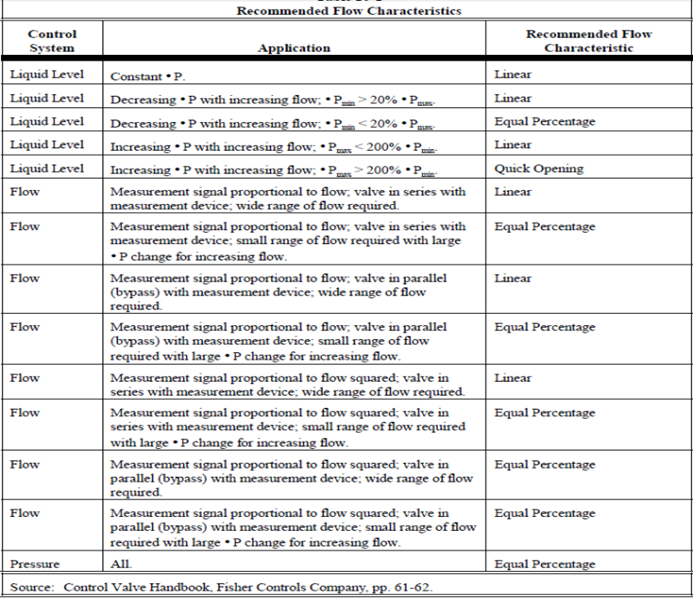 Valves have installed flow characteristics when the valve is installed into a system with pumps, piping, and fittings, causing the pressure drop to vary. The system components alter the flow rate so it is no longer determined by the geometry of the valve body and disc. The flow rate is altered by resistances resulting from pipelines, orifices, or other equipment in series with the valve. For a linear valve, the effect may be described by the following equation.

Where: a= ratio of valve head differential at max flow to zero flow
Design Tip: The best choice is usually a linear valve and because they tend to be used most often, the installed and inherent characteristics are similar and linear. Therefore, there will be limited gain in the control loop. Equal percentage valves will also provide good results and are tolerant of over-sizing. 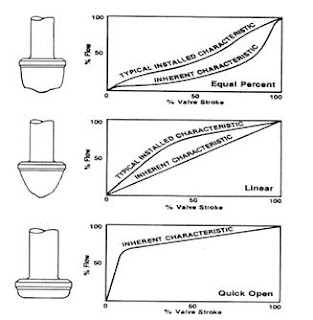 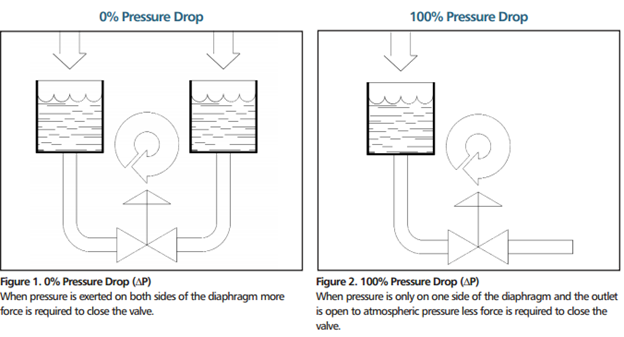 The actual pressure drop is the difference between the upstream (inlet) and downstream (outlet) pressures.

The pressure drop affects the flow characteristic of the valve.

Rangeability is a very important factor when selecting a valve type. It is defined as the maximum to minimum flow rate that can be controlled by a given valve type. The characteristic is affected by three factors: the geometry of the valve, the seat leakage, and the actuator's accuracy or stiffness at near closure of the valve. Geometry is inherent due to the design of the seat and closure and excessive seat leakage can cause instability in the valve as it lifts off the seat.

Flow rate is affected by the flow characteristic and the pressure drop across the valve.

Valves are used in many industrial, commercial, and residential applications and therefore must be available in a wide variety of sizes and shapes. Valves can be as large as 10 tons and as small as 1 pound; however most valves used in process systems are installed in piping that is equal to or less than 4 inches in size. The variables to consider when sizing a valve include:

The science behind valve sizing is determining the flow through the diameter of the valve. Since throttling valves may contain two different sized openings designed to accommodate a pressure drop, proper sizing is critical for an efficient system.

The use of increasers or reducers to create nonstandard piping configurations can be corrected in the Cv equation. In order to determine the piping geometry factor, Fp, the inside diameter of the pipe is required. In the table below, "d" is the inside diameter and "D" is the outside diameter.

Piping- geometry factor for valves with reducers and increasers on both ends. Table Credit: Valtek International