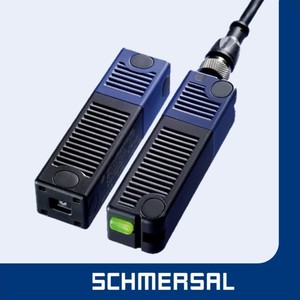 The non-contact sensing allows for longer switch life. Since there are no moving parts there is little to no wear on the components. As safety guard panels age, the sensor will tolerate misalignments, up to 10mm. It also allows the RSS36 sensor and actuator to be sealed into IP69K rated, corrosive resistant housings – a viable solution for use in applications where high temperature and high pressure wash downs are typical.

The RSS36 also features all of the diagnostic advantages of our electronic safety sensors. The RSS36 comes standard with LEDs to indicate various errors. For more advanced indication the RSS36 is also available with serial diagnostics to communicate its status via serial data packages for use in various network protocols. Because of an integrated dual monitoring microprocessor, only one switch is required to meet PLe per ISO 13849-1 and SIL3 per IEC 62061. The RSS36 can be connected in series or in combination with electronic sensors and locking switches, up to 31 devices without loss of signal or safety level when monitored with a number of standard Schmersal safety controllers.

A Modular Solution For Machine Controls